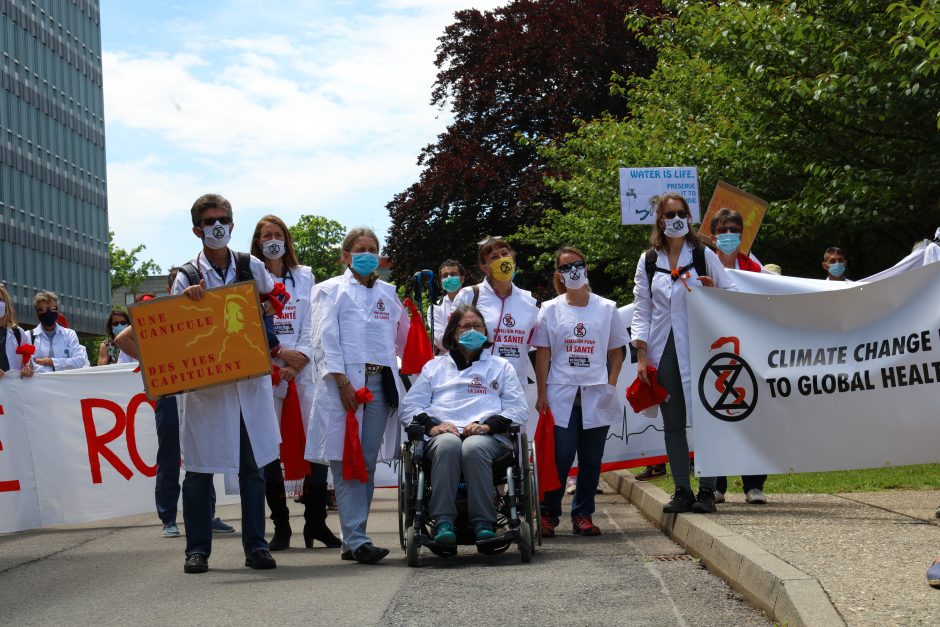 ●      Dr Tedros Adhanom Ghebreyesus, Director General of the WHO today met with Doctors For Extinction Rebellion, who called on health authorities worldwide to prioritise climate and biodiversity loss as a health priority, outside the World Health Assembly in Geneva.

●      They handed him a letter signed by over 1000 health professionals along with a large hourglass, the symbol of Extinction Rebellion.

●      Dr Richard Horton, editor of the Lancet and Dr James Hospedales, former head of the Caribbean Public Health Association called via videolink to speak to Dr Tedros directly and support the message of the protestors.

Before the meeting, Doctors for Extinction Rebellion conducted a silent march from Place des Nations towards the WHO, where they were welcomed by Dr Maria Neira, Director of Public Health, Environment and Social Determinants at the WHO, and Dr Tedros himself

Professor Valerie D’Acremont, an infectious diseases specialist and one of the co-founders of Doctors for Extinction Rebellion Switzerland, handed a letter to Dr Tedros which stated: “Health authorities must make the consequences of climate change and biodiversity loss the number one public health issue and support the declaration of a state of emergency for climate and biodiversity.

“We ask the WHO to be the driving force and guarantor of public policies that respect the health of all and preserve life.”

Richard Horton, the editor of the Lancet, the world’s most prestigious medical journal, spoke by videolink from London. He said: “The COVID-19 pandemic has taught us an important lesson—those countries that took early and decisive action successfully protected the health and welfare of their citizens compared with those who delayed.

“The climate emergency is a more far-reaching public health emergency of international concern than COVID-19. It’s time to accelerate our actions towards decarbonisation, renewable energy, and a green recovery. The costs of inaction will be measured in the preventable deaths of millions of people already living in vulnerable and precarious settings. We cannot let this be the legacy of the present crisis.”

Dr James Hospedales, former Executive Director of the Caribbean Public Health Agency and founder of the EarthMedic and EarthNurse Foundation for Global Health, called via videolink from Trinidad. He gave a statement on behalf of himself and Dr David Johnson, the Chief Medical Officer of Dominica, one of the countries worst-hit by hurricane Maria in 2017.

“On behalf of all small and low lying states, though coronavirus remains a huge national issue; we cannot ignore that the root cause of both coronavirus and of climate change is the same: A lack of care and reverence for nature. As health professionals we must call for greater protection of our planet in order to protect our patients.”

Having received these messages Dr Tedros addressed the assembled health professionals, saying: “The pandemic will end, but there is no vaccine for climate change. We have to act now, in solidarity, to prevent and prepare before it is too late.”

He concluded: “The pandemic has reminded us that health is not a luxury, it’s a human right. And that means everyone has the right to clean air and a healthy environment. We know what needs to be done, so let’s get to work.”

At the end of Dr Tedros’ speech, he was handed a large hourglass, the symbol of Extinction Rebellion.

Several senior health professionals from the area were in attendance. Dr Jean Martin, former chief medical officer of Vaud, the 3rd largest region in Switzerland, said “This is an appeal to decision-makers, to ask them to act much more vigorously than they have so far.”

Dr Philippe Sudre, former chief medical officer Geneva, also in attendance said: “We have responded to the covid emergency but other crises are inevitable. We must act on the root cause and put an end to the band-aid strategy.”

The World Health Assembly is the world’s highest health policy setting body and is attended by delegations from all WHO Member States (1,2) once per year.

During COP 21, the WHO’s then Director General Margaret Chan said ““The evidence is overwhelming: climate change endangers human health. Solutions exist and we need to act decisively to change this trajectory(3).”

About Doctors For Extinction Rebellion

Doctors for Extinction Rebellion Switzerland is a health professional collective who, appreciating that climate change is an impending public health catastrophe, have decided to support and undertake civil disobedience with Extinction Rebellion in a worldwide movement.