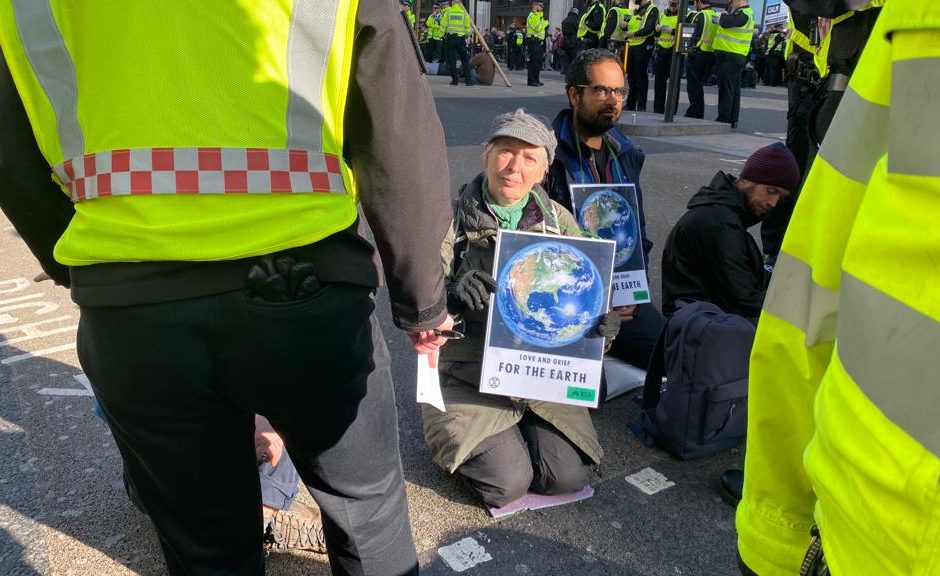 XR member and life-long peace activist, Rowan Tilly, was convicted on Tuesday for obstruction of the highway during the 2019 October Rebellion. But instead of imposing a punishment, the judge instead issued a rare absolute discharge, praising Rowan as ‘honest’ and ‘sincere’ and her deeds as ‘noble’.

Rowan, 63, a full time de-escalation trainer from Oxford, had pleaded not guilty while admitting she had blocked traffic on the last day of the ten-day mass protest. During the action on October 18th 2019, she was kneeling in the road at the end of Regents Street, holding a placard with a picture of Earth from space and the words “Love and Grief for the Earth”. She refused to move despite being repeatedly asked to do so by police. Giving evidence, her arresting officer said Rowan had been both calm and friendly.

Delivering his guilty verdict, Judge Bisgrove at City of London Magistrates’ Court cited a number of historical examples – the US and South African civil rights movements, the Suffragrettes, the anti-nuclear testing protests – all of which had been unlawful, and all of which had achieved change, he said.

On finding Rowan guilty, rather than impose the standard nine to twelve month conditional discharge, he instead gave her an absolute discharge and just £200 court costs.