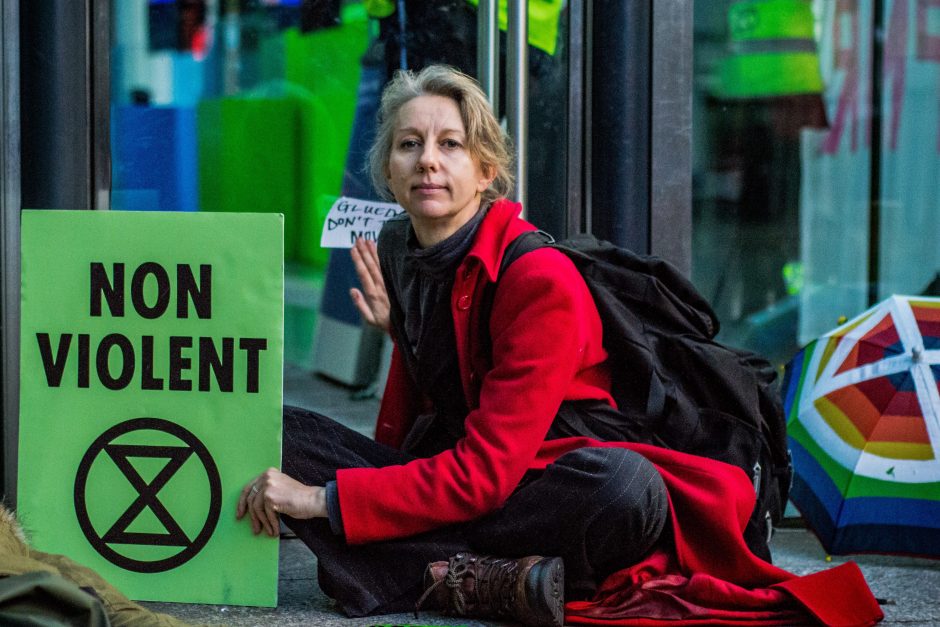 ‘How many bankers were arrested yesterday?’ – XR Co-founder released under investigation for fraud and conspiracy to cause criminal damage

Extinction Rebellion co-founder Dr. Gail Bradbrook was arrested at her home in Stroud at around 5:30 AM on Tuesday, 11 May, and released under investigation later the same day. [1] She was arrested by officers from the Metropolitan Police for conspiracy to cause criminal damage following a Suffragettes-inspired window-breaking at her local Barclays branch, and fraud in relation to the Repair Harm debt strike, which donates Barclaycard debt as reparations to those tending to the effects of climate devastation. [2] Both protests are Money Rebellion actions to spotlight Barclay’s deadly investments in environmentally destructive industries. [3][4][5]

Dr. Bradbrook explained: “The Prime Minister himself has championed acts of civil disobedience, like his pledge to lie in front of bulldozers to stop Heathrow expansion or declaring that he’d eat a compulsory ID card in protest because ‘extremism in the defence of liberty is no vice’. Even the Home Secretary has celebrated the Suffragettes. The methods can’t be what is bothering the banks and government—I think it’s the message. They are the criminals, they are the guilty ones; like others, I am a conscientious protector, as the highest law asks us to protect life on Earth.” [6][7][8]

Fellow citizens seem to agree, particularly the jury who recently ignored a judge’s orders and acquitted six XR activists for spraying graffiti and breaking windows at a Shell building. [9] A January survey found public opinion to be firmly on the side of environmental justice, as ‘60% of UK voters [think the] UK should strive to be a global leader on climate action.’ [10] It certainly makes sense, then, that a government that’s lost legitimacy by failing to be the climate leader both its people and the international community expect of a COP26 host would want to sharply silence those demanding ethical climate action. [11][12]

But the steep rise in State hostility against peaceful activists is more than mere embarrassment, as there are reports of a wider anti-democratic campaign that is concentrating influence and profit so the desires of a few wealthy donors are satisfied instead of the needs of the country, people, and planet. [13][14][15] The UK already has a history of police and government overreach and abuse of protestors, but now it’s taking lessons in social control from pro-Trump hate groups. [16][17][18][19] This accelerating authoritarianism threatens democracy, from listing justice-focussed groups like BLM and XR as ‘terrorist organisations’, to harassing nonviolent activists with pointless investigations into far-left ‘violent’ extremism, appointing cronies to important media posts and giving powerful media men access to and influence over politicians, and introducing overly-strict anti-protest laws that could imprison a person who’s only blocked a road for a longer sentence than a convicted sex offender—all at massive taxpayer expense. [20][21][22][23][24][25]

Dr. Bradbrook said: “The corruption of the banks, finance system and wider political economy are responsible for killing life on earth. Not only do they fund fossil fuels, industrial animal agriculture, and biodiversity-wrecking projects, they continue to be involved in mass corruption, fraud, and scandal—the FinCEN files being the most recent, but also LuxLeaks, the Panama Papers, PPI fraud, the rigging of Libor, wholesale tax-dodging and supporting offshore finance that nearly brought down the global economy, the list goes on. I owe Barclays bank about 70 quid. I gave the money to Survival International to help repair the harm of that bank. How many banksters got arrested yesterday?”  [26][27]28][29]30][31][32][33][34][35][36][37][38][39][40]

Find out more about how the political economy is harming us or about Money Rebellion actions here. [41][42]

[8] Under Priti Patel’s rule, the suffragettes would probably have been deported (Metro, 2019)

[11] Norway, the UK and Canada are not climate champions. They are climate hypocrites (CNN Philippines, 2021)

[21] Boris Johnson’s probe into left-wing “extremism” is a dangerous distraction from the fascist threat (New Statesman, 2021)

[29] Economic Growth is the Cause of Climate Change, Not the Solution to It – CounterPunch.org (CounterPunch, 2021)

[31] THE BANKING SECTOR’S ROLE IN THE GLOBAL BIODIVERSITY CRISIS (Portfolio, 2021)

[33] What are the FinCEN files? Here’s what to know about the leaked documents tying Wall Street banks to possible money laundering.  (Business Insider, 2020)