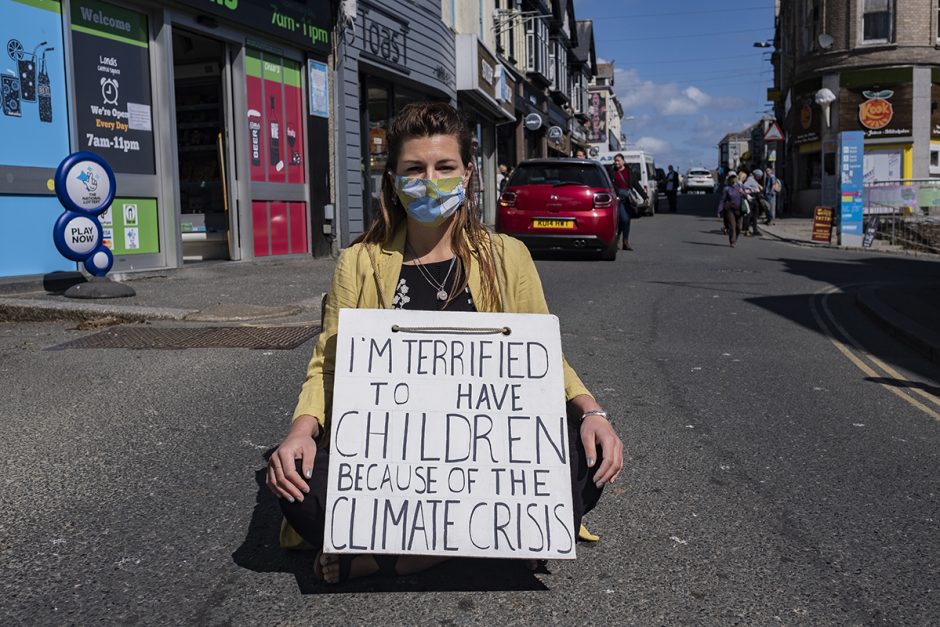 UK Newsletter Special: Rebellion Of One

Rebellion has returned to the UK for May Day, and in a whole new way.

The Rebellion of One (Ro1) saw over 200 rebels come out onto the streets to take part in single-person roadblocks all over the country.

They may have looked alone, but each rebel sitter had a hidden support team, ready to step in the moment they were needed.

Each blockade was the result of weeks of preparation and a great deal of personal bravery. These solo sitters were not just facing arrest but oncoming traffic, baffled onlookers, and potentially aggressive drivers. 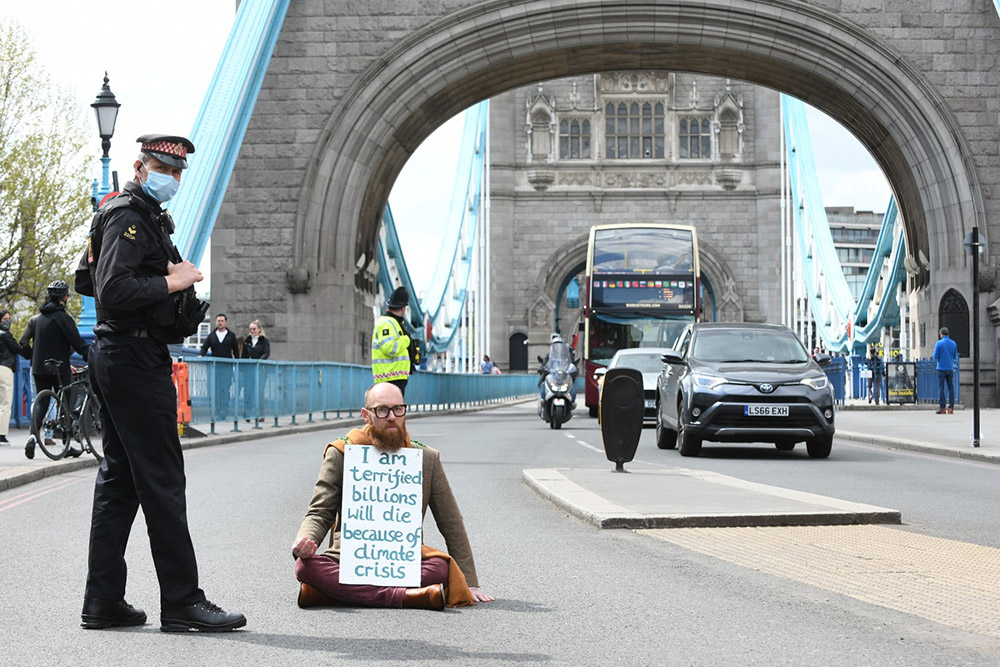 Why were so many brave rebels willing to put their bodies on the line? Because exactly two years ago our parliament declared a climate emergency. And today our political leaders are still serving us the same stale mix of distant targets and empty promises.

This pandemic has shown us that governments CAN suspend business as usual to avoid disaster. We’ve seen our society and economy radically altered to contain a public health crisis.

Yet when it comes to the colossal threat of the climate and ecological crisis, the only action they seem willing to take is to further criminalise protest. 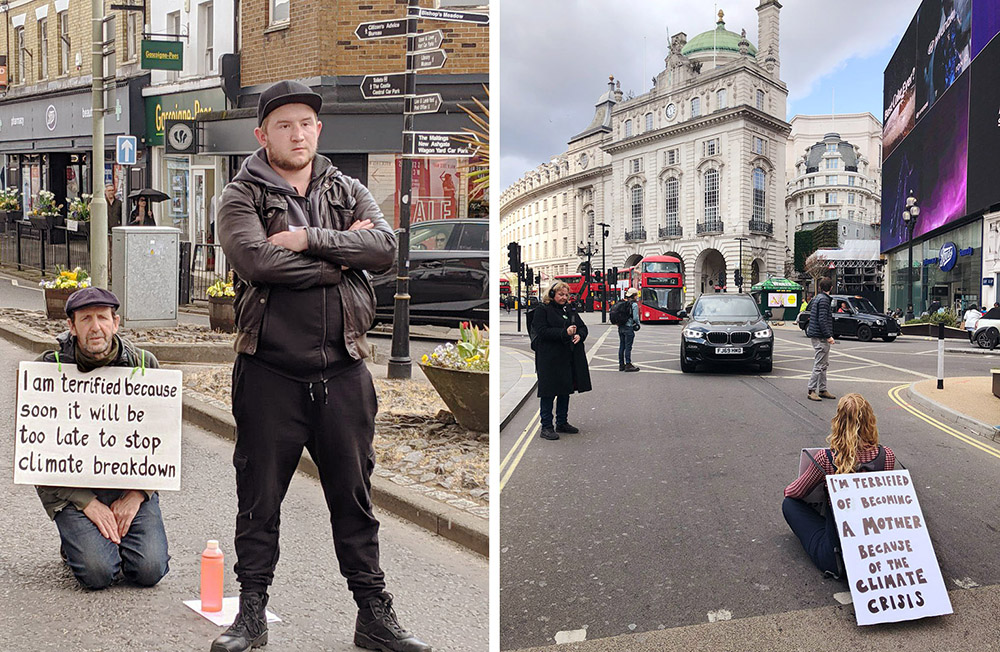 The Police, Crime, Sentencing, and Courts Bill aims to curtail our rights to protest and was drafted by the government in response to XR and Black Lives Matter. Ro1 was brought forward by an hour so rebels could join the nationwide ‘Kill the Bill’ marches straight after.

May 1st, International Workers’ Day, has always been a historic day of protest. Yesterday, we did that tradition proud. The pandemic may have subdued it, and our government may wish to suffocate it, but the flame of protest still burns bright.

With the G7 summit and COP26 just around the corner, we cannot let that flame go out. Be inspired by these courageous rebels, and join us for the crucial protests yet to come. 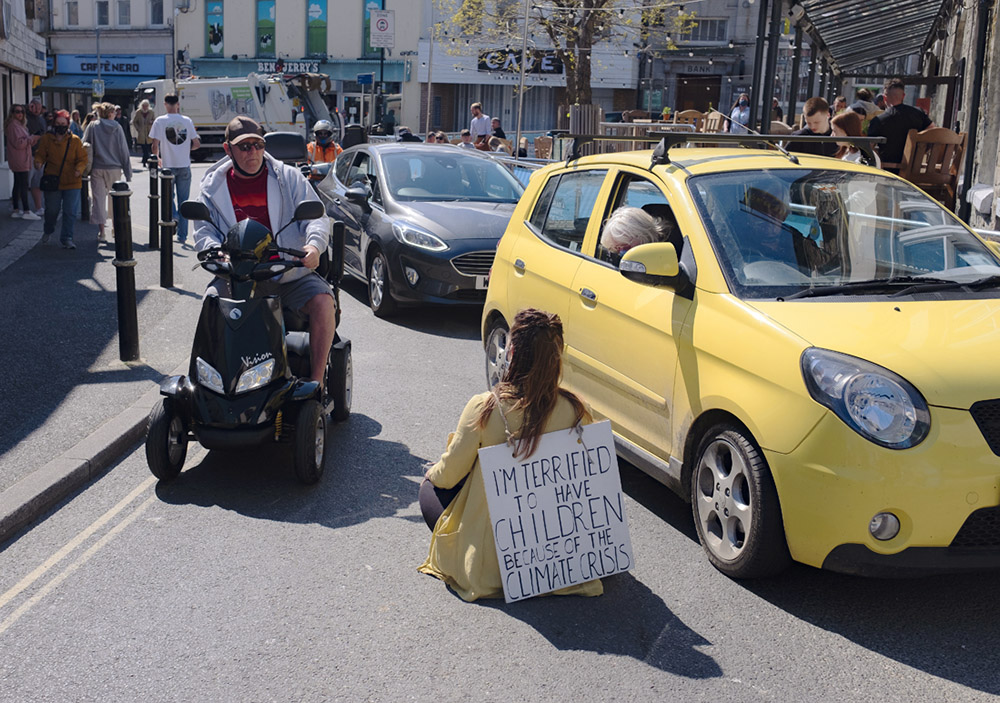 Want to get more involved in XR? Learn more about our movement & check out our guide.

This newsletter is brought to you by the Global Newsletter Team. If you like it, why not subscribe, and get global rebel news in your inbox every month.

Crucial climate summits are just around the corner and we need money to get our message heard. Anything you can give is appreciated.

The Power Of One 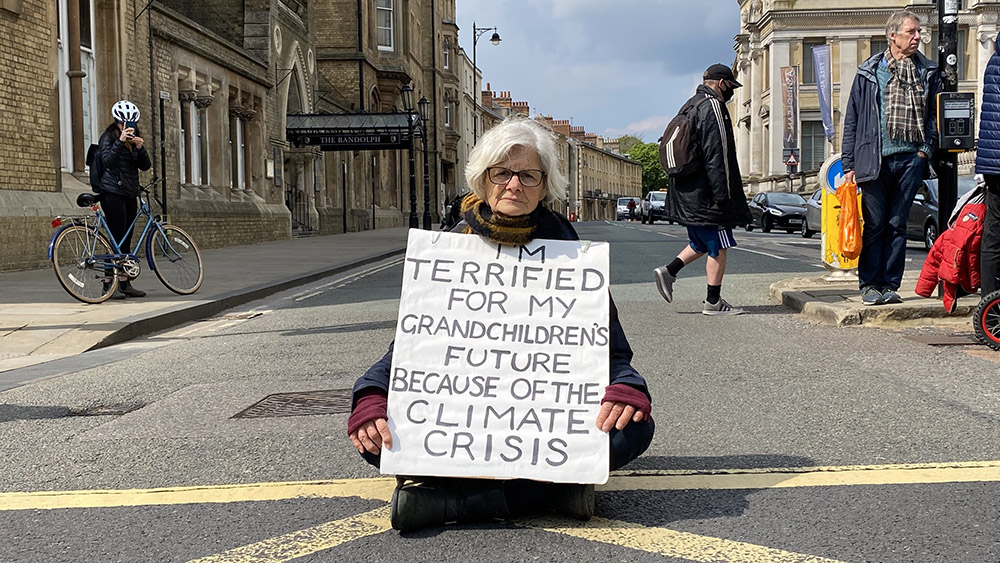 “I have 3 grandchildren and I can’t bear to think about their future.” Anne is one of many rebels whose Ro1 actions are featured in this special hour long XR Livestream.

If the Rebellion of One has shown us one thing, it’s that one protestor wields a lot of power.

The rebels who took to the tarmac yesterday were ordinary people. They included doctors and nurses, teachers and students, parents and grandparents. And they faced the morning traffic with nothing but hand-written signs explaining their terror for the future.

The reactions from the public ranged from screams of abuse to mass applause. But what was consistent was the immense attention that each protest received. 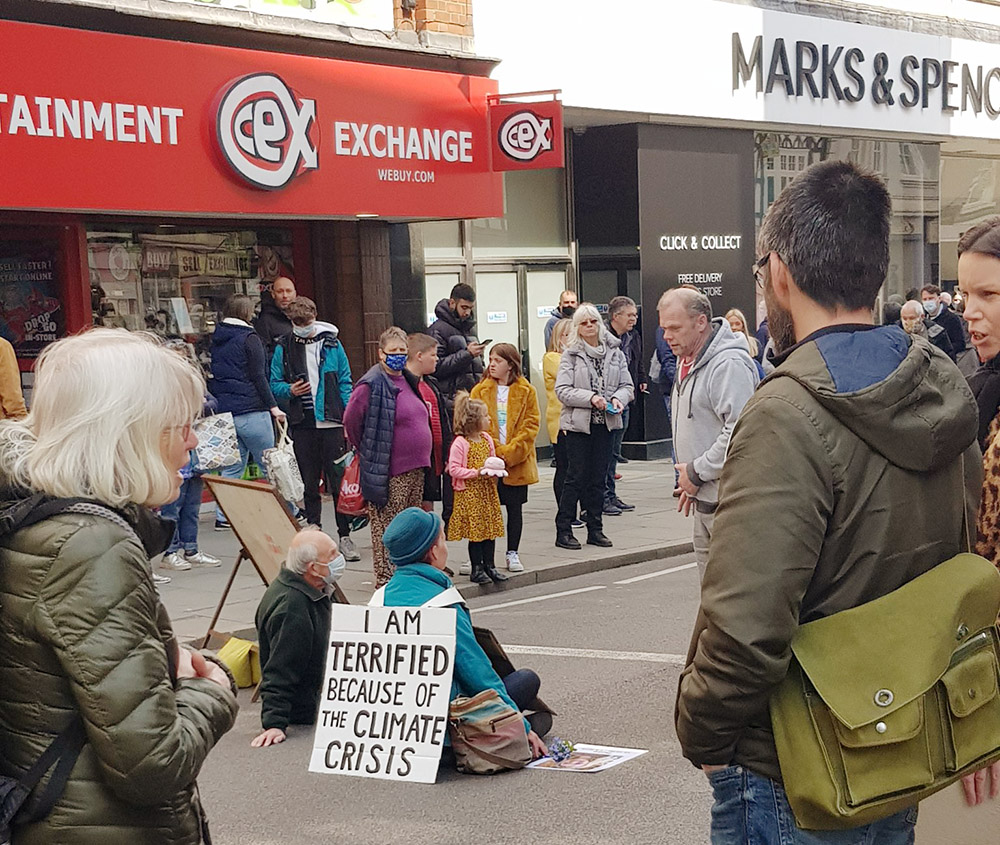 While the scale and severity of the climate crisis may still be unclear in our public sphere, the incredible courage and conviction that these rebels possessed was not.

Onlookers stopped and stared, passing cars slowed to read the sitters’ signs, police arrived in disproportionate numbers, and crucial conversations about the climate crisis started happening in high streets up and down the country.

Some locations even saw members of the public spontaneously join   the rebel roadblocks in solidarity. 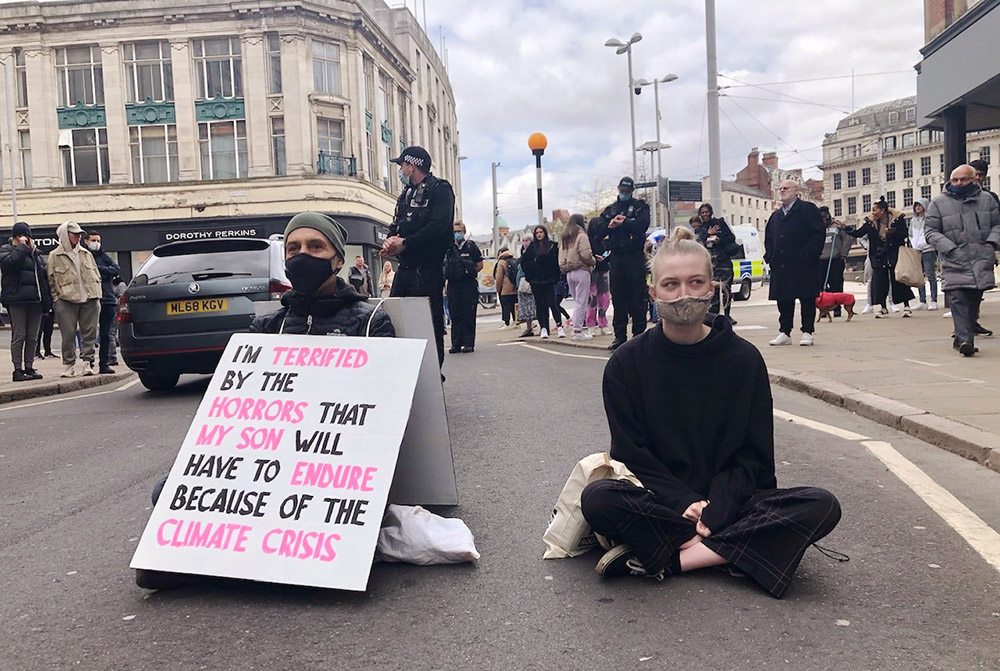 A Rebellion of Two: a woman sits in solidarity with a rebel in Nottingham city centre.

With over 200 separate protest sites, we were never going to be able to feature all the Rebellions of One in one newsletter. But below are some highlights from a momentous day of protest.

Featured or not, sitter or supporter, every single rebel that was involved in Ro1 is a hero. With lockdown nearly over, they have returned our mass movement to the streets (and the airwaves) with calm efficiency and mesmerising power. 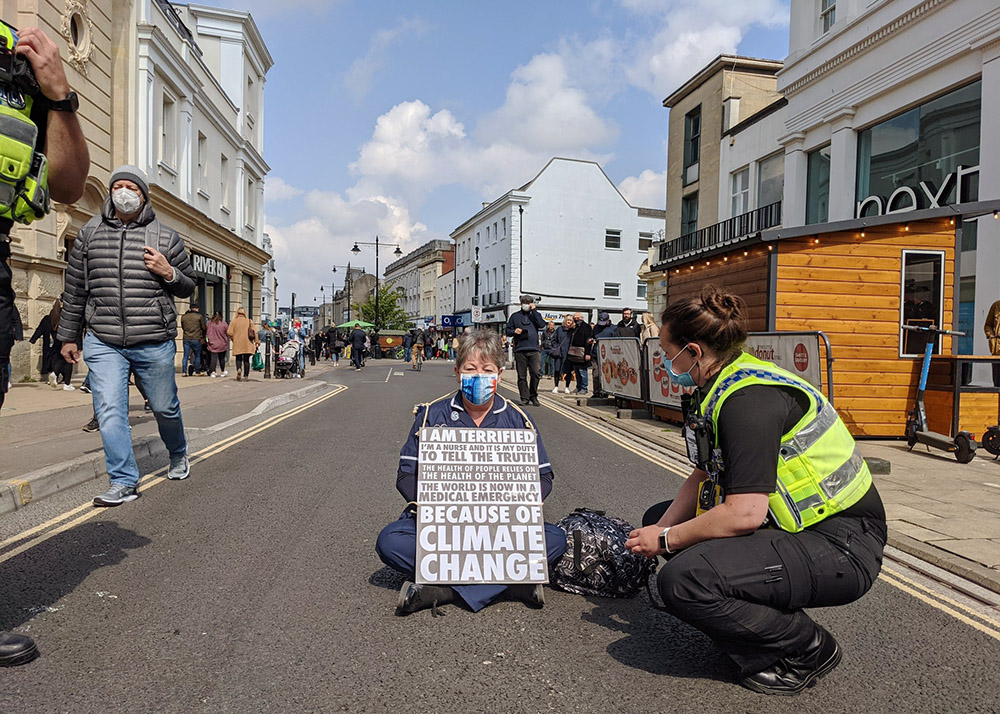 Cheltenham: Threatened with arrest, a retired nurse takes the voluntary decision to end her protest. The whole street applauded her courage. 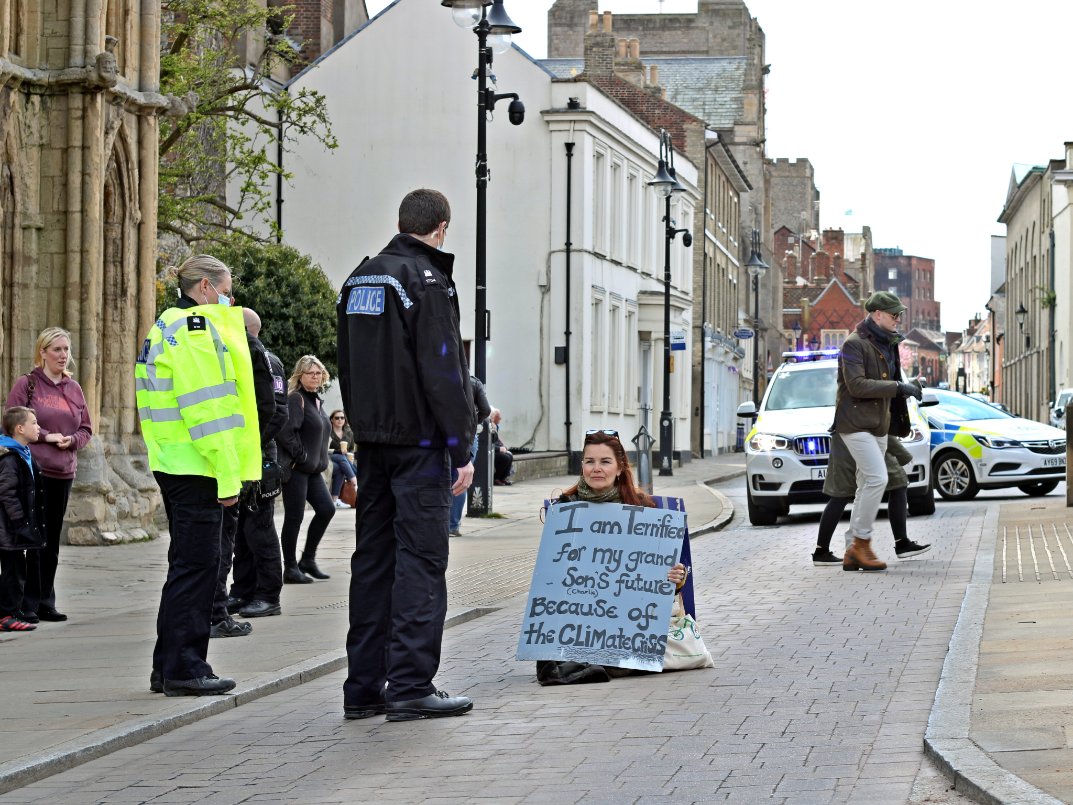 Bury: 3 police cars and 6 officers came to investigate this rebel, some armed with guns. Do police really need more powers? 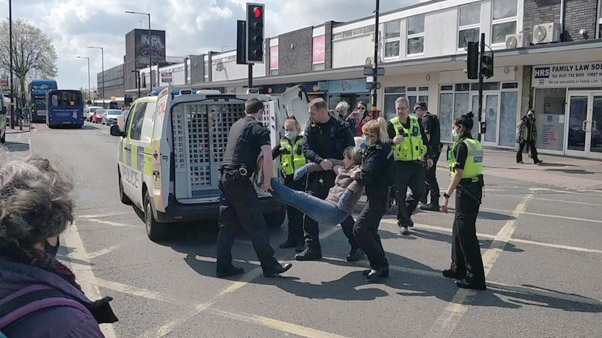 Birmingham: A doctor is carried into a police van. Read why she was part of the Ro1. 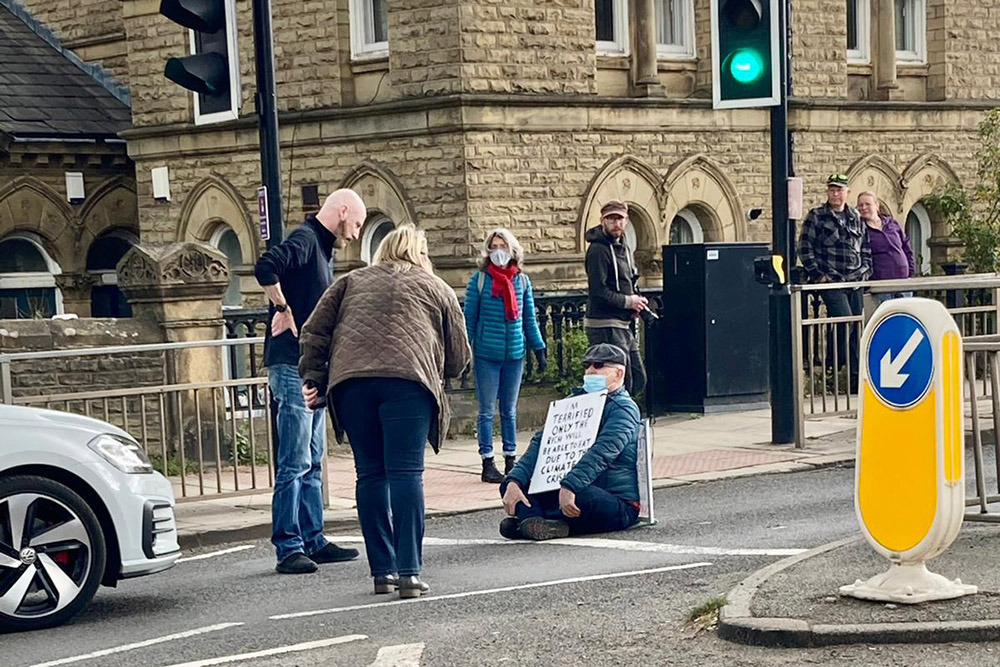 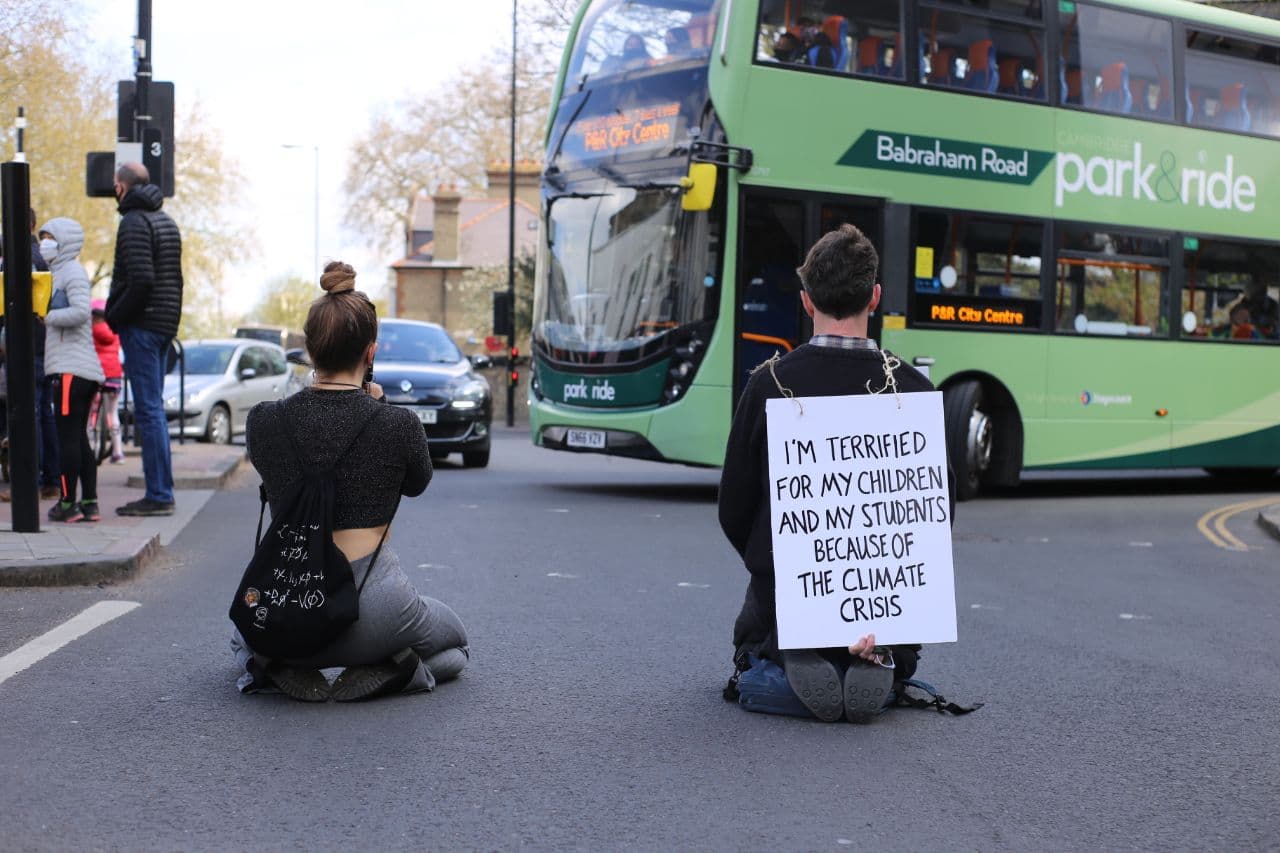 Hills Road, Cambridge: A member of the public is moved to join the rebel in the road. 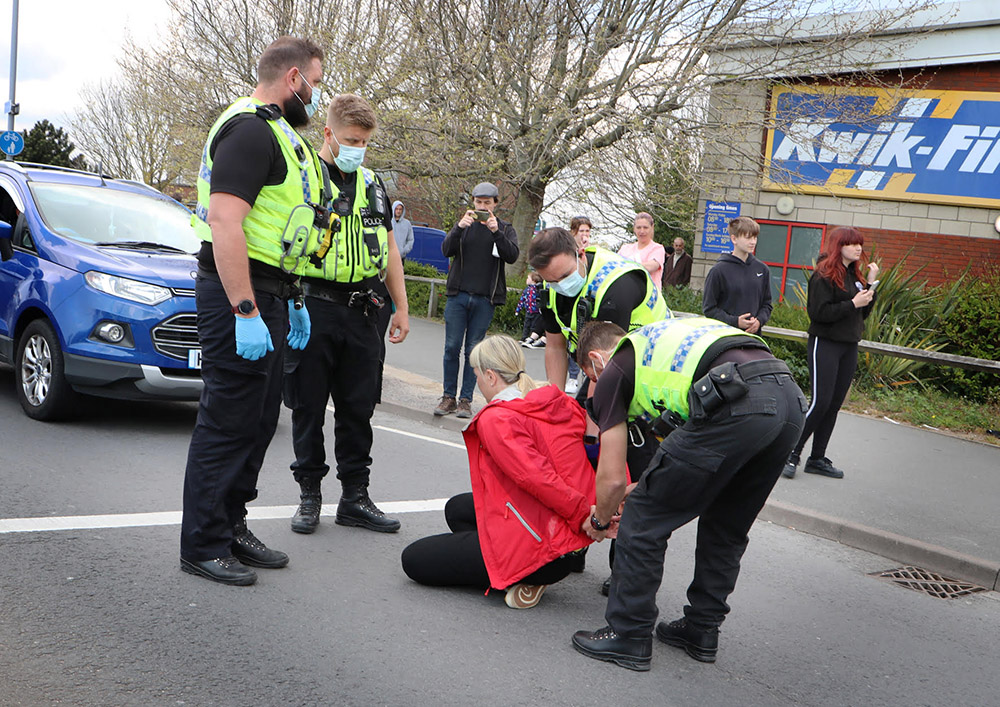 Weymouth: A former conservation ecologist is arrested. Watch her explain why she took part in Ro1 while footage plays of her arrest. 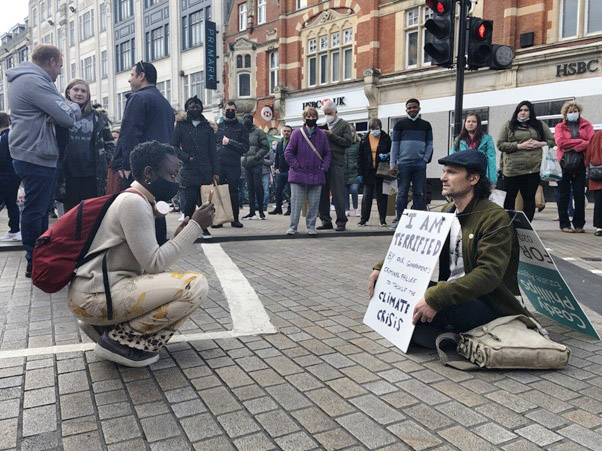 Bromley, London: Another rebel attracts a crowd of interested onlookers. 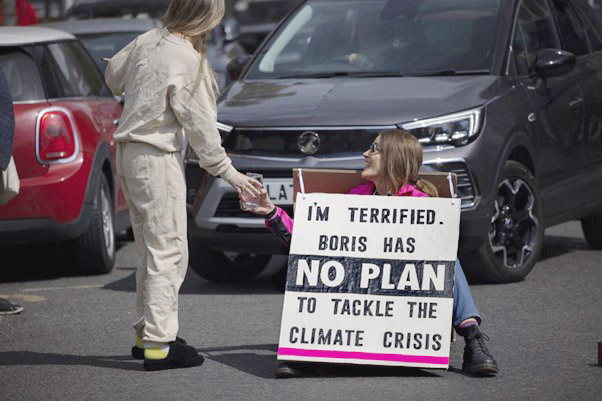 Clapham, London: A rebel is given a glass of water. T’was a sunny morning in London. 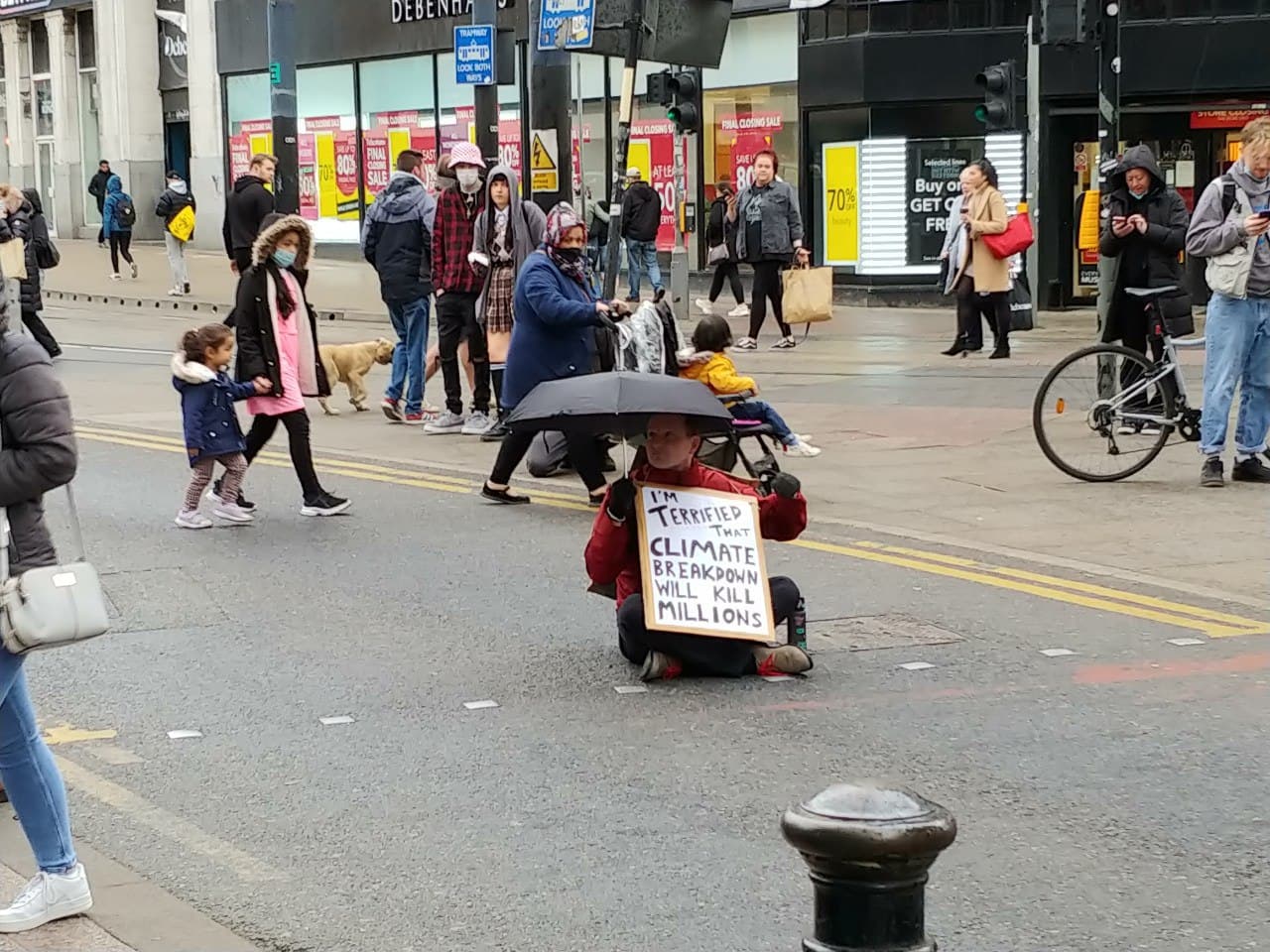 Manchester: The weather didn’t hold, but this rebel sitter did. 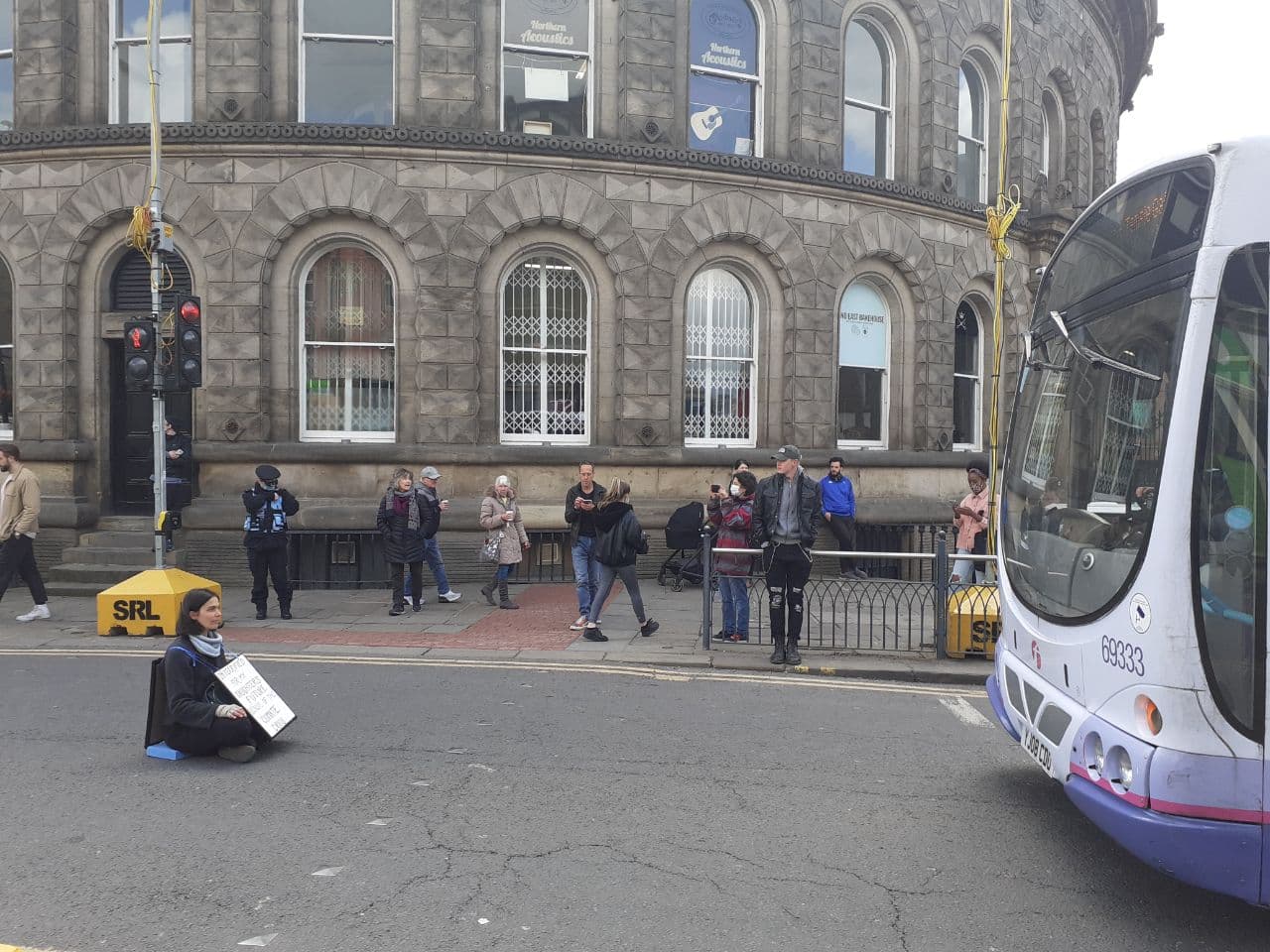 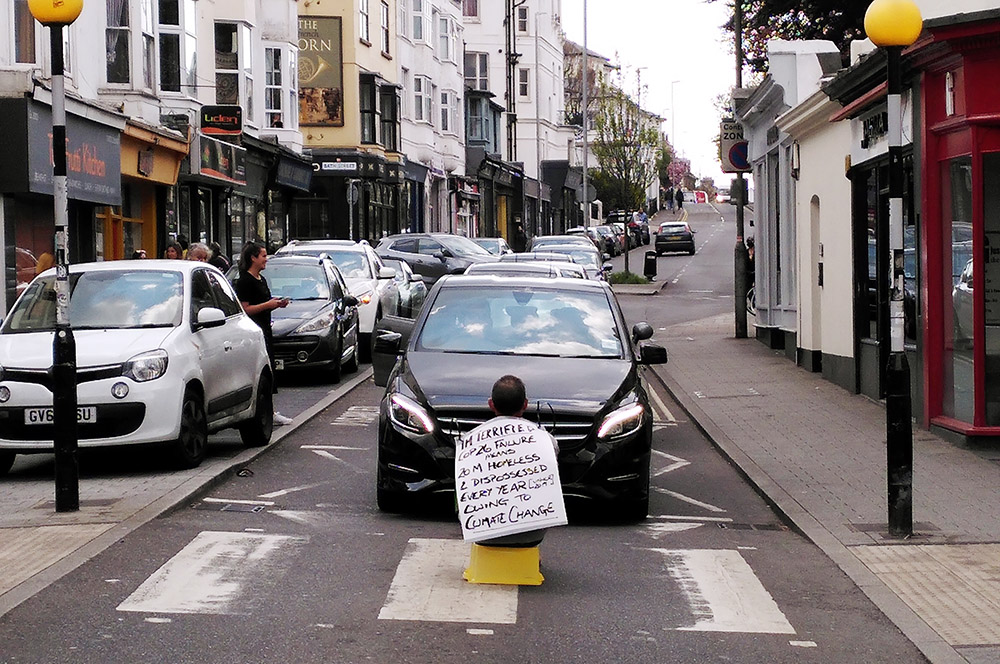 Brighton: A rebel creates a stick of Brighton block. 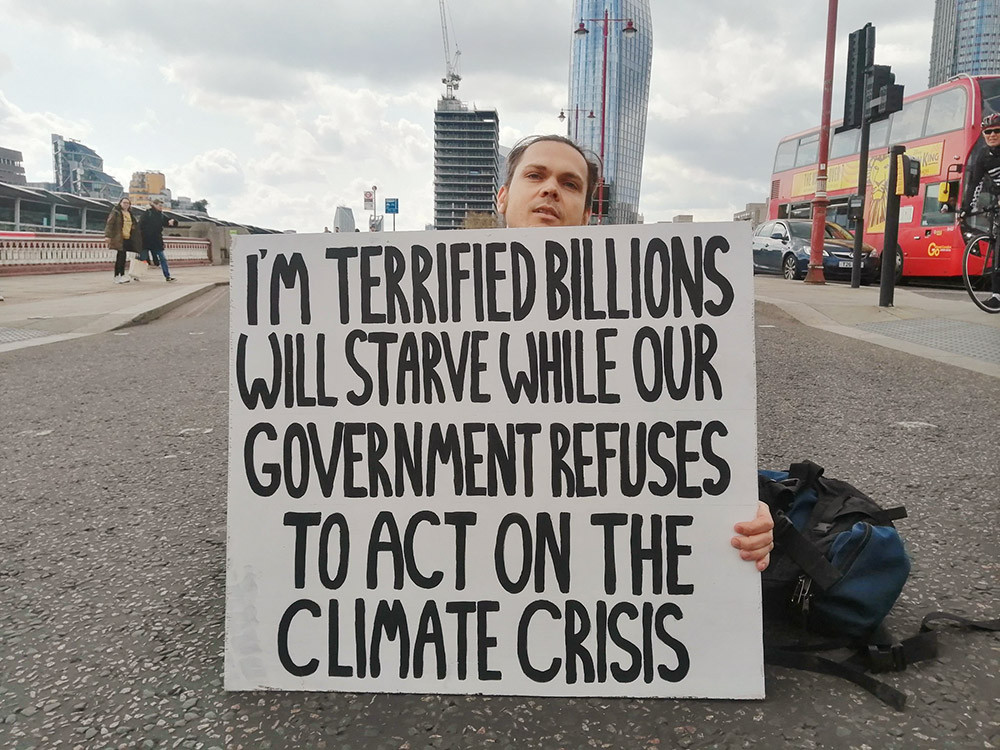 Blackfriars Bridge, London: Number of rebels it takes to block a bridge? One. 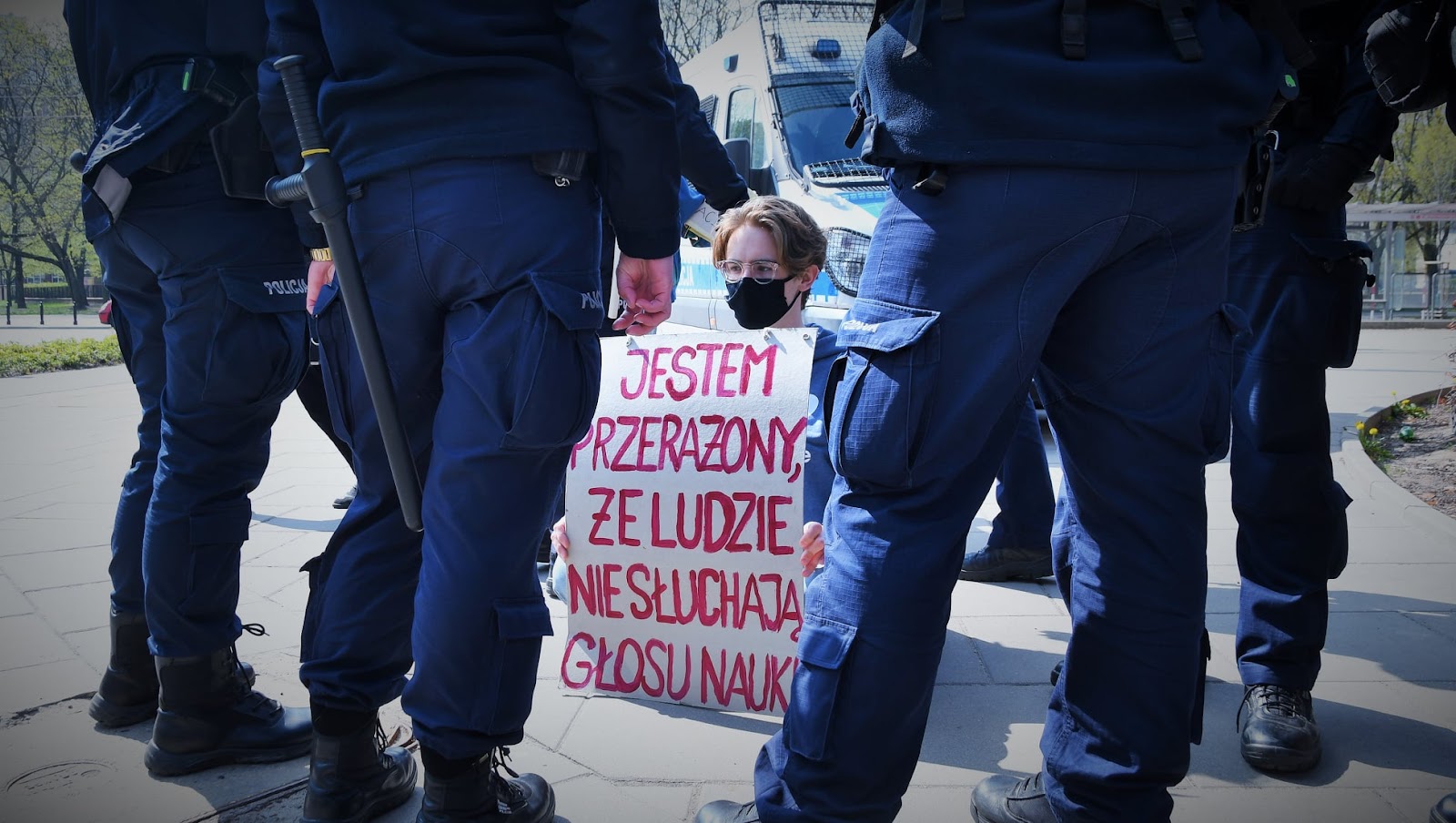 A Polish rebel takes part in the nationwide Ro1 action there on Friday 30 April.

Rebellion of One may have been a roaring success in the UK, but that’s not even the start of it. No, really!

Major Ro1 actions have already taken place in Germany and Poland, and rebels in Sweden, Switzerland and Israel are gearing up for their own Ro1’s in the coming days.

To get the full lowdown you’ll need to read Issue 51 of the XR Global Newsletter, out May 14th and crafted by the same team that brought you this one.

Over 250k rebels worldwide have already subscribed to the monthly missive, so why not join them? You’ll get action reports from around the world, interviews, book reviews, must read articles and more. Subscribe now!

The local elections are just a few days away but there’s still time to download our excellent  Local Elections Pack and make a splash before the big day!

This pack is part of a bigger project to build awareness about climate crisis induced flood risks to the UK.

It includes a guide, posters, and questions to ask prospective candidates. It’s everything you need to get a debate about extreme flooding into the news or on your doorstep.

Our team and I feel grand about our Rebellion of One! We will definitely do it again. As a sitter, it was a bit difficult to get the jist of what was happening while on the ground. So it was great to debrief with my support team to get the full story.

The response from the public was really interesting and surprisingly gendered, with men shouting and getting aggressive and women offering refreshments and words of support.

My longest conversation was with a family and particularly a 7 year-old who was really clued up on the Climate Emergency. This was encouraging because I took part in Rebellion of One to safeguard the future for my kids.

Taking action as part of XR really matters to me because political change isn’t happening fast enough, and I’m saying that as a lecturer in Politics!

I was worried about taking part as the police in Northern Ireland have been cracking down on allied movements like Black Lives Matter. But while interactions with the police turned out to be fine, drivers were more aggressive than I was expecting.

My support team were great at calming people down and de-escalation by videoing what was happening. It’s so important to trust your team when taking part in an action like this and to stay in the present as much as you can.

XR has helped me keep my sanity over the last couple of years, and kept my hopes alive that change is still possible.

I’ve gone down the usual channels to protect ecosystems as an Ornithologist for many years. I continue to take long and costly legal action to protect Lough Neagh and Lough Beg, the UK’s largest freshwater wetland.

But the system is corrupt and fails to act at every turn. I have lost faith in the judicial system and now believe the only route left is to take to the streets in a peaceful way.

I was apprehensive about being arrested for Rebellion of One because environmental campaigners are not popular in Northern Ireland.

When sitting in the road I just kept looking at the sky and went down the alphabet naming all the wetlands in the world that have disappeared. Thinking about the loss of species in these great places, at such a rate, helped me to face the traffic.

We are all really pleased with how it went. The recently scorched Mourne Mountains were our backdrop and served as a strong visual justification with the public for the disruption.

I felt so prepared to sit in the Rebellion of One and I am so grateful for my support team and XR for the huge wealth of training on offer. I will definitely do this again, and when I am arrested, I will go to court willingly to have my say! 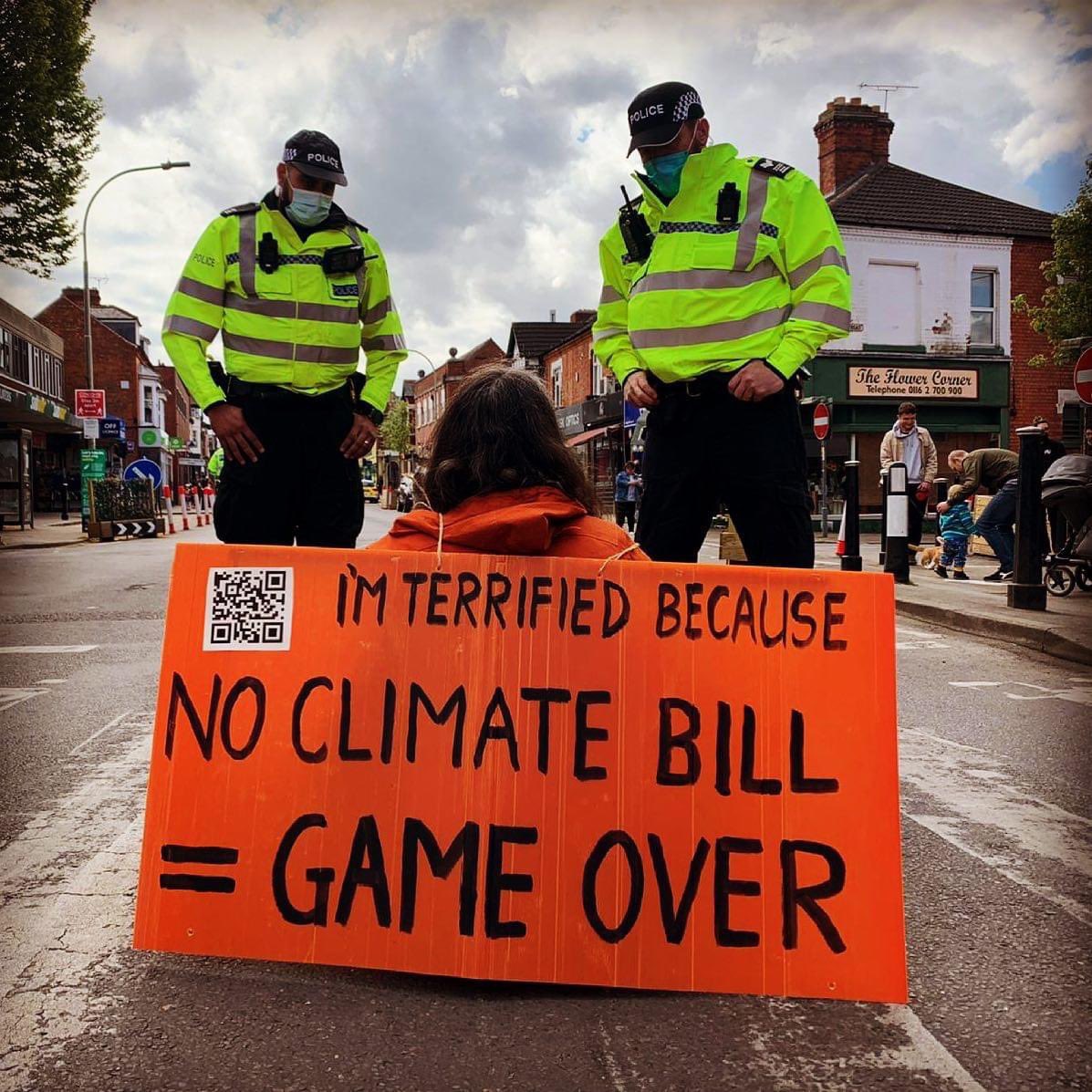 Leicester: Police loom over a rebel who wants to keep playing.

Thank you for reading, rebel. If you have any questions or feedback, we want to hear from you. Get in touch at xr-newsletter@protonmail.com.

Crucial climate summits are just around the corner and we need money to get our message heard. Anything you can give is appreciated.