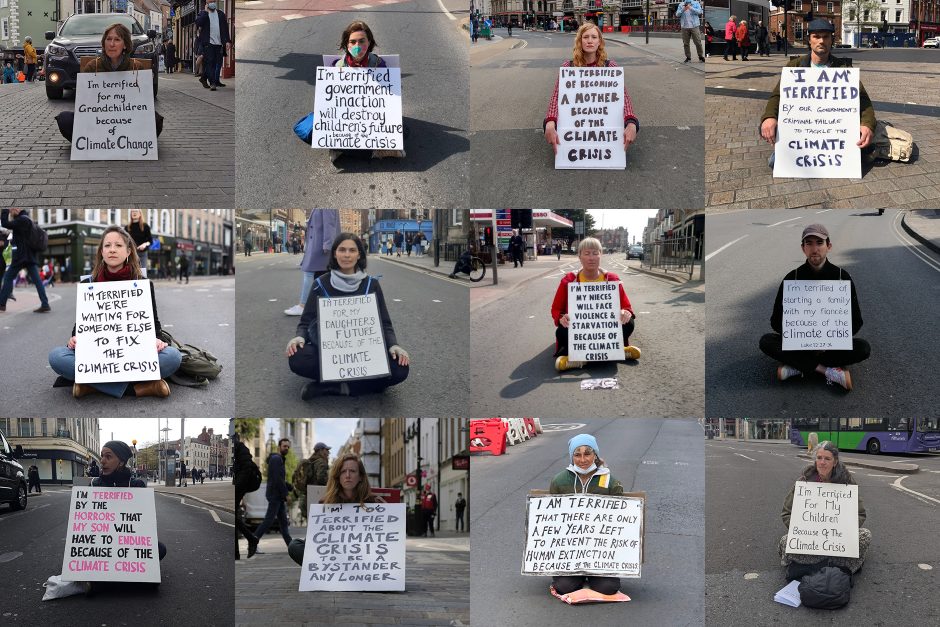 At 11am on Saturday 1st May, two years to the day since the UK Parliament declared an environment and climate emergency, over 200 hundred people sat alone in roads blocking oncoming traffic in a courageous ‘Rebellion of One’. The ‘sitters’ wore signs with a message about their fears for the future if the climate and ecological crises continues to go unaddressed. The individual disruptive actions took place in towns and cities across the UK – including Scarborough, Weymouth, Birmingham, Oxford, Bradford, Ipswich, Lincoln, Canterbury, Newcastle, Portishead, London, Newquay, Swansea, Bangor in Northern Ireland and many more.

This vulnerable act of peaceful civil disobedience by ordinary people across the UK – including doctors, nurses, teachers, students, parents and grandparents – highlighted the fear and frustration felt by many at the failure of the UK Government to take the climate and ecological crisis seriously.

Boris Johnson recently announced that the UK would ‘toughen’ its climate targets, pledging to cut emissions by 78% by 2035, compared to 1990 levels, as part of the pathway to net zero emissions by 2050. [1] However, in December last year, the National Audit Office found that the UK Government is predicted to fail to meet its existing climate targets and said that a radical reassessment of priorities was needed. [2] The Committee on Climate Change – the body tasked with monitoring government progress on reducing admissions – said in its progress report last June that the UK has failed on 17 out of 21 progress indicators, falling further behind in many areas and that just two of 31 key policy milestones had been met over the first year since Parliament declared emergency. [3] The 2050 date is itself under question, with top scientists including Former Chief Scientific Advisor to the Government Sir David King writing to tell Boris Johnson that the UK should be aiming to reach net zero emissions by around 2030. [4]

Spokesperson for Extinction Rebellion UK, Gully Bujak, said: “This Government is good at creating positive headlines on climate, but what we need them to do now is stop focussing on their image in the media and start acting.”

She added: “When you look beyond the headline grabbing ‘ten point plan’ and the promise to ‘toughen’ targets, to what bodies like the National Audit Office and the Committee on Climate Change are saying – those tasked with monitoring what the Government is actually doing – it is clear that our government don’t have a plan.

“We are seeing today that people are scared and frustrated at the refusal of this Government to accept the severity of the crisis. The UN People’s Climate Survey found that 81% of people in the UK believe that we’re in a global emergency. The Government needs to commission a national Citizens’ Assembly on climate and ecological justice, because even if politicians are scared to face the truth, ordinary people are ready for action.” [5]

The actions come at the start of a day of mass protest around the UK to oppose the Police, Crimes, Sentencing and Courts Bill. The draconian bill cites the impact of Extinction Rebellion and Black Lives Matter protests as justification for an increase in police powers and directly references XR several times.[6] Out of concern over this bill, and other repressive government activity around the world, 400 international scientists have signed an open letter calling on governments everywhere to end the criminalisation and persecution of climate campaigners at this pivotal time in the race to curb global heating.[7] [8]

One of the actions took place in the Northern Irish coastal town of Newcastle, County Down, just days after the area experienced some of the largest gorse fires in recent years. [9]

The action was part of an approach developed during the Covid-19 pandemic by members of Extinction Rebellion, in which people can engage in civil disobedience alone, yet united. Similar actions have already taken place in other countries, including in Poland, the Netherlands and Germany.

Quotes from people who took action around the UK

Andrea Muntiu, a 36 year-old NHS nurse from Ipswitch who sat in the road blocking traffic in the town, said: “People may wonder what a nurse is doing sitting in the road with a placard. They may wonder what impact this will have on my career or whether I’ll get in trouble with the police.

“I am aware of the risks but I feel I have a moral duty to warn people about the catastrophic consequences of the climate crisis. We all witnessed how poorly this Government managed the Covid 19 crisis. There isn’t a plan in place to tackle the climate crisis, even though scientists have been warning us for years. Floods, hunger, drought, pandemics, species extinction and social collapse will all be a reality if we don’t act, and the children of this country and of this world will be the first and most affected.

“We cannot let this happen. We can still change things, we can demand the government acts now and safeguards what we have. What will our legacy be for future generations? Will it be apathy while witnessing how political greed destroys this planet? Or will it be action, actively fighting to build a safe world that children can live in?

“I’m protesting in my home town because Weymouth will be devastated by climate breakdown. My actions may cause local disruption but Weymouth will be among the first places in the UK to feel the effects of sea level rise, with vast areas flooded. I act today to prevent far greater disruption in the future.

“I’m terrified to sit on a busy road by myself, but I’m more terrified of a future where my 4 and 6 year-old nieces will face starvation due to crop failures and violence as wars break out over fresh water.”

Bing Jones, a 68 year-old retired NHS doctor and grandfather from Sheffield who sat blocking traffic in the city, said: “I’m terrified that our climate targets are empty promises. We have targets for 2050 but we are still increasing emissions today. The Government has made inexcusable Covid mistakes. I’m terrified that they will be even worse on the climate crisis.

“I am desperate. I write, lobby and support green politics but see nothing real happening. So I am sitting in the road today with a notice saying I am terrified. I am sorry to disrupt ordinary people but I do not know what else to do.”

Fiona Prior, a 58 year-old retired primary school teacher from Carlisle who sat blocking traffic in a local road, said: “I am here today to try to cope with my feelings of despair, grief and powerlessness. When I had my two children 30 odd years ago I thought that they and any grandchildren would live in a world better than the one I had grown up in and would live a better life than the life I have had. My life has turned out to be full of privilege and thoughtless resource depletion. What their lives will be is a totally different matter as we face the climate crisis escalating every single year.

“I am terrified for the future of my 6-year old grandson. What should I tell him? That I stood back and did nothing or that nana Fi did everything she possibly could to make the changes happen?”

Abbey, a 24 year-old part-time waitress and self-employed dressmaker from Newquay who blocked traffic on a local road, said: “At school I excelled in science and at school science is taught as the reality, as fact, as truth. I wanted to be a scientist, I wanted to be Prime Minister, but my most cherished aspiration was to be a mother. Specifically mother to a football team and a sub – a gaggle of happy children!

“This dream was taken from me when I read headlines in 2018 stating that we were 12 years away from hitting devastating climate tipping points. These headlines were referencing a report released by the Intergovernmental Panel on Climate Change: scientists. The kind of report I was taught to hold with high regard as truth at school. I realised that climate change was not someone else’s problem. Ecosystem collapse, flooding, food shortages, mass migration are crises that both this and the next generation will face if this government fails to act now.

“Two years have passed since that report was released and May 1st marks two years since Parliament declared an environment and climate emergency, yet this government is ploughing further into this catastrophe. My dream of being a mother has been taken from me by politicians set on business as usual. I am blocking traffic as I grieve children I will not conceive.”

Lynda Duffill, a 53 year-old mental health trainer and volunteer manager from North Pembrookshire who sat in the road in Haverfordwest, said: “I have been an environmental activist all my adult life, I’ve lobbied politicians, filled out petitions and changed my personal life to decrease my carbon footprint. Twenty-five years ago I undertook a degree in International Relations and wrote my dissertation on why the destruction of the environment should be treated as a security issue. Twenty years later in 2016, Maj Gen Munir Muniruzzaman, then chairman of the Global Military Advisory Council on Climate Change, said that climate change is the greatest security threat of the 21st century.

“So, why am I sitting in the road today? I fear for the next generation’s future. I work with young people and have two young adult children myself. They deserve a life free from the difficulties that climate breakdown could bring.

“In January this year, the biggest ever poll on climate change found that 81% of people in the UK believe that we’re in a global emergency. People have said they want action and should be included as part of the solution. A national Citizen’s Assembly would give the Government a mandate to act on the will of the people.”

Morgan Trowland, a 38 year-old civil engineer from Hackney in London who sat blocking traffic in the capital, said: “I’m terrified that billions will die because of the climate crisis, humans and non-humans. I’m freaking out that many people are accepting this, or feel powerless to change the course. I want to show onlookers that we each have phenomenal power.”

[1] UK enshrines new target in law to slash emissions by 78% by 2035:https://www.gov.uk/government/news/uk-enshrines-new-target-in-law-to-slash-emissions-by-78-by-2035

[5] Climate change seen as global emergency by 64 per cent of people: https://www.newscientist.com/article/2265764-climate-change-seen-as-global-emergency-by-64-per-cent-of-people/