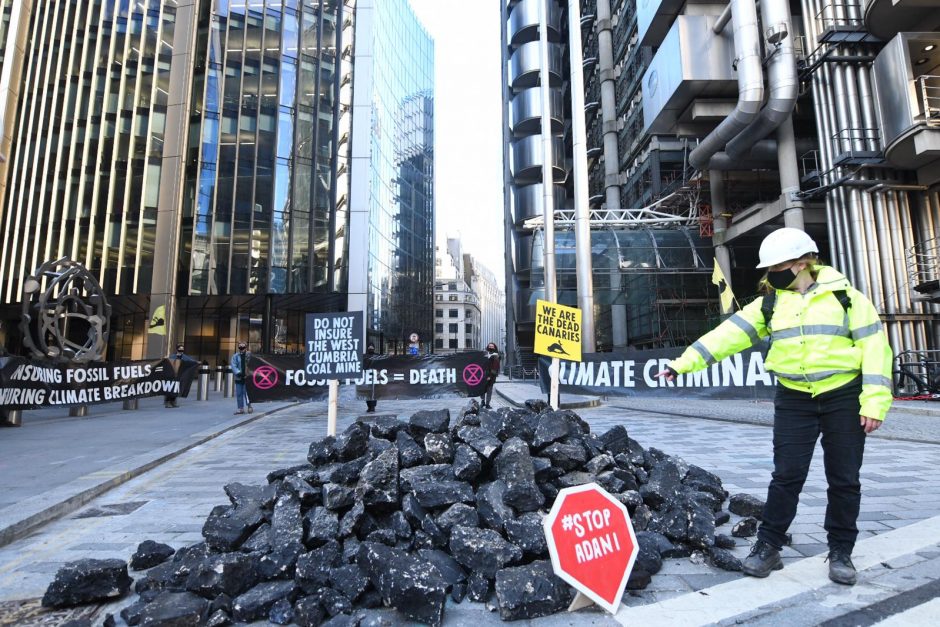 At 7am on Friday April 23rd members of Extinction Rebellion used a tipper truck to dump a large pile of fake coal at insurance giant Lloyd’s of London’s headquarters in the City of London, blocking the main entrance to the building. The group placed safety barriers around the area before the black rubble, used to represent coal, was dumped on the road. They then placed placards in the mound reading ‘stop Adani’, ‘we are the dead canaries’ and ‘do not insure the West Cumbria coal mine.’ They held banners reading ‘climate criminals’, ‘fossil fuels = death’ and ‘insuring fossil fuels = ensuring climate breakdown.’

The action was part of Insurance Rebellion – a network of groups including Extinction Rebellion UK – taking action to highlight the role of the Insurance industry in fueling the climate and ecological crisis.

Lloyd’s of London, not to be confused with the unrelated Lloyds Bank, is a major player in the global insurance marketplace and facilitates the fossil fuel industry by insuring and investing in it. The dumped coal highlighted Lloyd’s support for the most polluting projects – tar sands and coal mines, including the highly controversial Adani Carmichael coal mega-mine in Australia.

Hayley Sestokas, an organiser with Frontline Action on Coal in Australia, said: “Adani is building its mine on stolen land. The Wangan and Jagalingou people have said no to Adani four times. Australia is already the world’s biggest exporter of coal. If the Galilee Basin is opened up, this would double our output at a time when the world desperately needs to move away from coal to curb runaway climate change. That’s why people from all over Australia are putting their bodies on the line to resist the building of this mine. Lloyd’s need to stop insuring this deadly project. It’s great to see people taking action in London today.”

Harriet, 28, from Insurance Rebellion, said: ” Every day that Lloyd’s continues to insure fossil fuel projects we move one step closer to climate breakdown. Fossil fuel companies are destroying our planet, causing millions of people’s homes to be flooded, burnt to the ground in wildfires, and reclaimed by rising sea levels. We have to stop fossil fuels now before the climate emergency becomes any worse. Fossil fuel companies can’t run without insurance, so let’s stop insuring them.”

Lloyd’s has come under increasing pressure to stop its underwriting of fossil fuel projects from local people, scientists, and climate protestors across the globe. At Lloyd’s, specialist underwriters and insurance companies, grouped together as syndicates, operate globally, insuring around 40% of the global energy market, a large part of which is fossil fuels. Lloyd’s is a central part of the wider London insurance market, writing more than half of its total premium. The London Market Group reported that, in 2018, the combined London insurance market accounted for 55% of global energy sector insurance premiums. [1]

Lloyd’s also invests in fossil fuel companies. Although Lloyd’s appears to have a coal exclusion policy for its investments, this only applies to its Central Fund, which makes up just 3% of its entire investment portfolio [1]. The group also pointed out that Lloyd’s has helped to insure some of the most polluting fossil fuels possible – tar sands and shale gas – even when many other insurers have refused. [2]

John, 41, who took part in the protest, said: “Lloyd’s of London continues to insure the world’s biggest fossil fuel projects. After many polite requests, they’ve refused to rule out underwriting even the most controversial projects like Adani’s mega coal mine in Australia or the West Cumbria coal mine in the UK. We’re here today because we’re not willing to accept any more excuses, delays or half measures.”

[1] WHAT IS LLOYD’S OF LONDON AND HOW DOES IT HELP FUEL THE CLIMATE CRISIS? https://insureourfuture.co/wp-content/uploads/2020/08/Insure-Our-Future-Lloyd_Report_Fall-2020_Final.pdf

Insurance Rebellion launched in April 2021, aiming to halt climate and ecological breakdown by ending the insurance of fossil fuel projects and companies. The initial focus of the group is the global insurance marketplace, Lloyd’s of London, which provides around 40% of energy insurance worldwide, including the proposed controversial coal mines in the UK (West Cumbria Coal Mine) and Australia (Adani Carmichael Coal Mine). The group is a coalition of movements across the planet, and its protest today is its first.

Insurance Rebellion’s demands are that Lloyd’s of London immediately and forever: