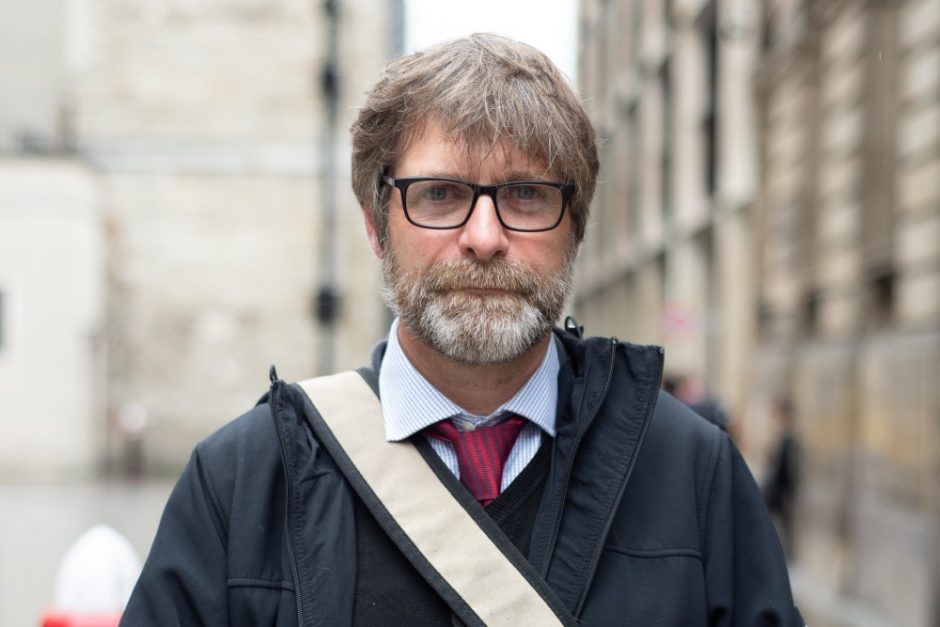 Mark, who is also a local councillor, was arrested on Sunday 21st April on Waterloo Bridge during the 2019 April Rebellion under Section 14 of the Public Order Act. He pleaded guilty on 11th October 2019 at City of London Magistrates’ Court and received a six month conditional discharge and £145 court costs.

“When I was arrested on Waterloo Bridge on that Sunday lunchtime, I had wave of panic course through me. I know that this court appearance and the consequences will be seen as a stain on my integrity and character by some. I have had to weigh up whether I can face my children in years to come and honestly say I had done all in my power to try and prevent the climate catastrophe they face as their father, someone who is supposed to protect them.

My wife recently told me that she would seriously reconsider our decision to start a family in the present knowing all we do about the deteriorating decline of our environment. I am appalled to hear young girls at our recent Climate Strike in my home town of Tonbridge openly questioning the choice of motherhood when faced with the dilemma of bringing babies into such an uncertain world.

People ask why it is necessary to occupy squares and bridges in the capital, isn’t the Government doing enough? Quite simply, measures to address the core issues are actually being abandoned. The Government has picked all the low hanging fruit of climate change mitigation, they have given the green light to offshore wind and similarly solar is steadily contributing to the energy requirements of the UK.

It has, however, completely back-tracked on so many commitments, carbon neutral housing, a moratorium on onshore wind and now we are seeing new coal mines being opened and the government continues to be a cheerleader of the fracking industry, despite experts confirming that, in order to avoid further climate change, 80% of the remaining known reserves of coal, 50% of gas and 30% of oil reserves need to stay in the ground if we are to avoid a 2% rise in worldwide temperatures, according to University College London. This Government has stalled on its commitment to safeguard our children’s futures and it is putting corporate profit above our ecology.

Without the protesting in April, would the Government have declared a Climate Emergency? The new Government seems to think it is now business as usual as the Prime Minister tells us that fusion reactors will be the energy source to save us, a technology almost completely untested with only a single reactor being tested and a power source not thought to come into meaningful use for decades, if ever. This unfounded faith in untested technology is being touted as a potential replacement for fossil fuels.

Our nation is completely in denial about the core necessity to reduce our levels of consumption. All our major parties are obsessed with measuring our success in terms of GDP rather than transitioning to a model based on sustainability, rather than its ability to produce and consume. We need to change our habits now; we cannot plough on married to the concept of unlimited growth on a planet with finite resources.

The losses here mirror the global annihilation of wildlife, which scientists suggest is the start of the sixth mass extinction on Earth and is undermining the natural life-support systems that humanity relies on for air, water and food.

We have a worldwide case of ecocide being committed before our very eyes and we are choosing to look the other way, because affecting any kind of change might just threaten the economic certainty of the corporate interests that dictate government policy on energy and agriculture. For decades we have witnessed the degradation of our immediate environment, the poisoning of our soils, the deterioration of air quality, the ripping out of hedgerows and trees to make fields larger and easier to manage at the expense of the habitats they provide.

We have been powerless to protect the creatures we rely on to complete the ecological circle. The abandoning of the Green Belt to developers who have already land-banked thousands of acres of brownfield land that they refuse to use before concreting across the countryside. None of this environmental vandalism is being challenged in these courts. It is left to individuals to make their voices heard as our institution’s ears are deaf to our call for change. Time is running out and the time for change was two decades ago but nobody answered the call.

It is already too late in parts of the southern hemisphere where the effects of Climate Catastrophe are already costing lives and they are least able to cope with the effects of extreme weather events and conditions that make their environment unliveable. Our privilege makes us blind to their predicament and the threat of mass migration and the bloodshed that may herald.

We need to see all nations united to face this existential threat and the only way I can see that happening is by individual actions forcing the hands of their governments by the only effective means at their disposal. We cannot claim to be civilised if, by our lack of positive action, we are inflicting the extreme ramification of the climate catastrophe on those in third world countries.

Our own government’s Committee on Climate Change said, “UK action to curb greenhouse gas emissions is lagging far behind what is needed even to meet previous less stringent emissions targets. Over the past year the Government has delivered just 1 of 25 critical policies needed to get emissions reductions back on track”. In effect, the government is also breaking the law by reneging on its commitments. But it is not brought to court today.

We have witnessed how our parliament is incapable of representing us. Non-violent direct action is the last resort available to ordinary citizens to apply pressure. It is not something that I took lightly. I didn’t expect to find myself as a middle-aged man in the back of a police van. I had been looking forward to spending Easter Sunday with my extended family not staring at the walls of a police cell. It should not be necessary for a middle-aged man to feel that he has no alternative than to be arrested to make a stand against his country’s complacency in the light of the mountain of evidence that the planet faces an unprecedented climate catastrophe.

I am sorry to have taken up the police officers time and taken them away from their normal duties and communities. I hope they understand that we only want to ensure the best outcomes for all our children’s futures. While in the police van being transported to Wembley Police Station, I was able to understand that the majority of officers also shared my concerns about their future and that of their families, if not the methods employed by those they had detained.

In summary, the police treated me as well as I could have hoped and I am sorry that driven by our collective and wilful denial of the science and lack of urgency I found myself with no option but to make my protest in this way. Thank you for allowing me to speak.”