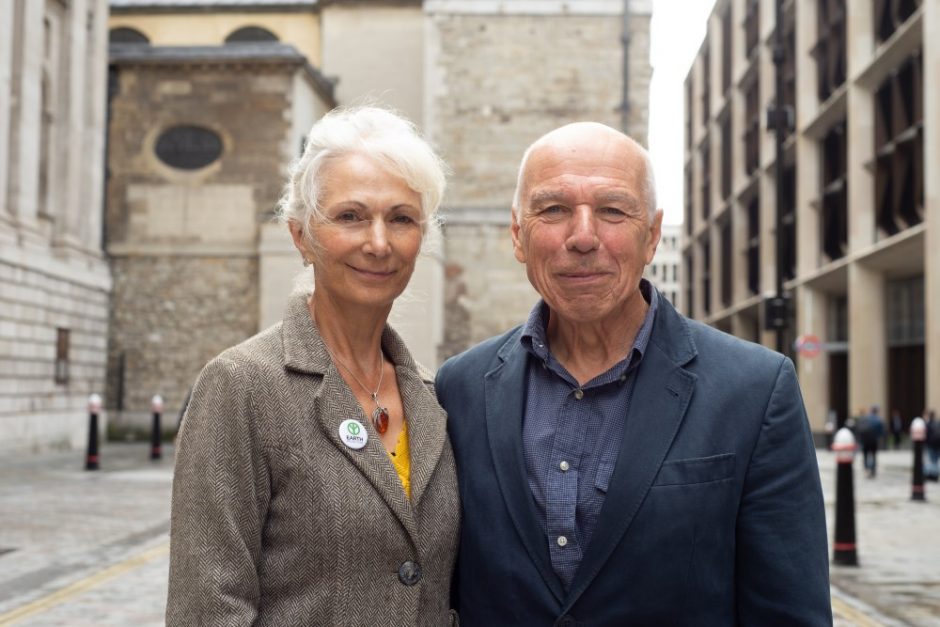 Suzanne, a retired chartered psychologist and husband John, a retired social worker and senior manager, were arrested together on 14th April 2019 on Waterloo Bridge during the 2019 April Rebellion. They were both tried on 15th October 2019 at City of London Magistrates’ Court and found guilty. Each received a six month conditional discharge and £80 court costs.

John was arrested again on 10th October 2019 for the London City Airport action during the 2019 October Rebellion and charged with Obstruction of the Highway. He pleaded guilty in his absence on 27th November 2020 received a six month conditional discharge and £101 court costs.

Suzanne explaining why she acted:

“There is an emergency on planet Earth, more extreme weather, intense heat waves, more droughts, more forest fires, more storms, floods and hurricanes. It’s destroying ocean life and land based wild life. People are losing homes to rising seas. We know what we need to do but politicians are failing us, failing to protect their people. The climate disaster is happening now and it will increase in severity and impact. I have been concerned for years about the impact of global heating and there is an urgent need to change the way we live – and governments should lead the way. Our government is subsidising fossil fuels, approving new fossil fuels and UK banks are investing in fossil fuels.

I have been concerned about the climate crisis informed by the science for many years and I took this action because all other means of influencing government policy were not waking government up to the danger we face. I have not been arrested before but if we have to take non-violent direct action to change government policies I am willing to do so. The disruption causes nothing compared to the devastating impact of the climate crisis. I took these actions on behalf of my children and grandchildren and for climate justice globally.”

“I am sorry I am unable to attend the court hearing but to travel to London and then on London Transport is too risky for me as I am in a high risk group with regard to covid infection. That is also one of the reasons I have decided to no longer plead not guilty as I cannot attend court and the covid danger is likely to be still present at any trial in 2021.

I am a 70 year old married man with 2 daughters and 2 young grandsons and I decided to take action to protect them and their futures because of the lack of action by the Government to combat the climate emergency within a timescale which scientists tell us require an immediate and robust response. To me the Government is breaching the social contract to protect its citizens.

I am also a registered Earth Protector in law and possess a Timestamping Certificate and believe we have a moral duty to protect the earth, our communities and that this should be reflected in law.

I have a first and Masters Degree and have spend a career in Social work, including much work with children and child protection which had included latterly both senior management and child protection training with public sector managers at all levels including senior police officers and magistrates. I have been a law abiding citizen and my commitment to protecting children remains strong.

In October 2019 my wife and I had gone to London to protest with Extinction Rebellion and during this time I attended a meeting where I heard about the proposed developments at City Airport, including a new terminus and development the size of 11 football pitches, quadrupling the size of the airport and adding 110 flights a day! When I went to the airport on 10th October I arrived on my own and joined a group of protestors who were singing outside the public entrance and exit door. I was also affected by a talk by a local resident who lived about 300 yards away who talked about the impact of the current airport on her family and hundreds of other residents. The impact of another 110 flights a day, a new total of 151,000 flights a year, on those residents’ physical and mental health was to me unimaginable.

When the group I had joined started to walk around the car park I stayed with them and eventually sat down. Then I was arrested.

I’m aware that my protect action caused some bus passengers a few minutes delay but I felt that the disturbance caused by my actions was hardly a drop in the ocean compared to the thousands of tons of carbon emissions generated by the extra 40,000 flights a year that the new proposals would create. As if the impact of high levels of flying on global warming, rising seas, famine and drought wasn’t more than enough!

I was heartened to hear that in February 2020 the Appeal Court ruled that proposed 3rd runway at Heathrow was illegal as it was inconsistent with the Government’s commitment under the Paris Agreement. In August 2020 work on the new terminus at City Airport was paused indefinitely.

The actions by those of us in Extinction Rebellion have brought increased awareness of the climate catastrophe we are all facing and morally I feel that I could do nothing but join in with non violent direct action and exercise my right to protest.

If the court considers it appropriate I am happy to comply with a conditional discharge and any costs the court may impose.”