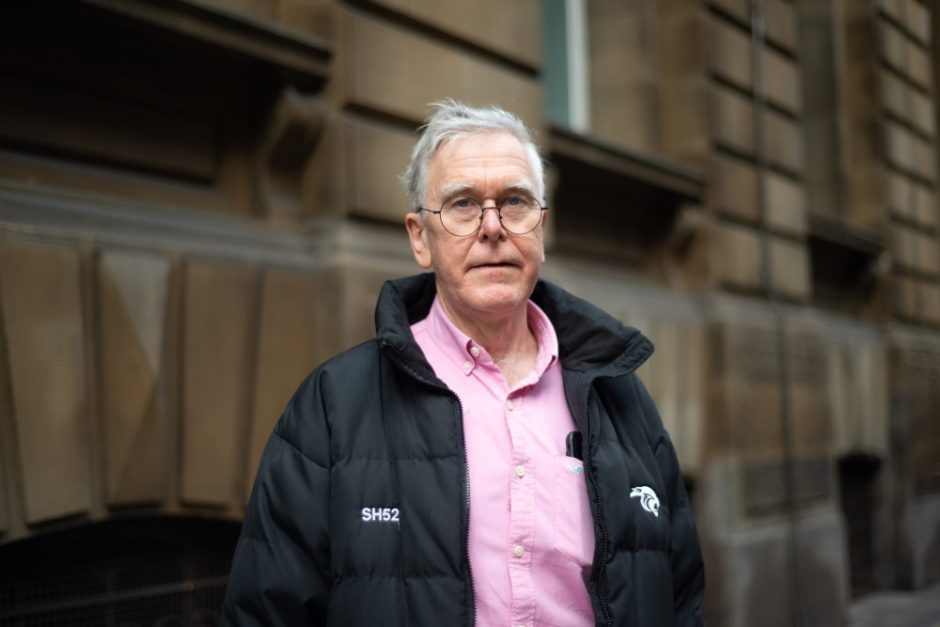 Sean, a former aerospace engineer and business manager with four children and four grandchildren, was arrested on Whitehall on 9th October 2019 during the 2019 October Rebellion. Although arrested under Section 14 of the Public Order Act, he was charged with Obstruction of the Highway. He was tried at City of London Magistrates’ Court on 2nd February 2021, found guilty and given a six month conditional discharge and £182 court costs.

“I retired about six years ago, had more time and read Sapiens which started me on this trail to climate and earth’s vulnerability. I had years of guilt from being in the defence business for 40 years – though I always objected to arms sales (and refused to take a posting in Saudi Arabia!). I saw/read about XR during the April 2019 rebellion and sought out the Godalming XR group, which is how I came to be involved with the September 2019 rebellion. I have always been a fairly boring, law abiding and probably slightly right-wing staple middle class, 9–5 brigade. I started taking a keen interest in the environment and climate change about 6 years ago, and my motivation really is what we are leaving to future generations, including my children and grandchildren.”

“I have been a law abiding citizen all my life. I have never been arrested in my 68 years. I have been a professional engineer and business manager in the aerospace industry for over 40 years working on critical defence systems for our Navy, Airforce and Army.

I have been a local councillor and an NHS volunteer. I have four children and four grandchildren. I am not someone with nothing better to do, nor am I a hemp-smelling old crustie as our prime minister has labelled us.

The climate crisis is unprecedented, and I have not taken this action lightly.

A few years ago, I decided to look into the climate crisis myself to understand what was being said by scientists and environmentalists. I have read many papers and reports, including those produced by the UN intergovernmental panel on climate change (IPCC). I have also read many books, one in particular by Dr James E Hansen, Director of Climate Sciences at Columbia University and previously director of NASA Goddard institute. In 2009, he wrote (in Storms of my Grandchildren): “I wish to counsel every parent and every grandparent. I urge you to take a stand so as not to let the full burden of responsibility befall our children. Arm yourself with information of the highest quality, think for yourself and then exercise your full intellectual and moral capacity to help the generations survive.”

He goes on to say: “The international scientific consensus acknowledges that global climate change from persistent high fossil fuel emissions is now well into the danger zone.”

And in 2018, David Attenborough addressed COP24: “Right now we are facing a manmade disaster……if we don’t take action the collapse of civilisations and the extinction of much of the natural world is on the horizon.”

The science is overwhelmingly clear. As a result, I have reached a point of complete despair. Despair, because our government is not listening to the science. I was present in Whitehall to protest in the strongest possible non-violent and legal way to my government. The place was appropriate, being as close to Downing Street as was possible. I chose to exercise my Right to Freedom of Conscience (European Convention on Human Rights, Article 9) and Right to Protest (Articles 10 and 11).

There is absolutely NO DOUBT that the world is heading for a climate disaster, indeed it is already happening all over the world – floods, storms, drought, fire and food shortages. Recently you might have read about the Thwaites glacier in Antarctica now melting at rate 80billion tons per year. The Greenland ice sheet has passed its tipping point and could alone result in an 83cm rise in sea level.

Elsewhere we are devastating the environment through pollution and deforestation which in turn is destroying wildlife habitats. Governments prefer to prevaricate or take ineffective action relying on carbon capture technologies that do not currently exist to solve the problem in the future. They are not being honest with us about the enormity of the problem.

If action had been taken in line with the IPCC Paris agreement, we would have had a 50-50 chance of limiting the planet to a 1.5-degree C temperature increase – it would still create hardship to millions -we are already at 1 degree C. Because of continued inaction we are on a path to a 3-4 degree C increase which will cause widespread death or famine to several billion people. We are also encountering the 6th major extinction of this planet – the first to be caused by human activity. 60% of wildlife has vanished since the 1970s.

This is not alarmist, it is reality.

If your house is on fire – and this planet, our home- is on fire, from the Arctic to the Amazon – how can you carry on business as usual?
Scientists have said we have just 11 years to turn things around.

We live on a planet with limited resources so it is clear, by the laws of physics, that consumption has to be limited or we will all die.

We need to stop being so greedy. The state has a duty of care to its citizens and has obligations under the European Convention on Human Rights, Article 2, to keep us safe. It is failing us.

The general public may think the UK is talking a lead, but it is not. The government says our carbon emissions have reduced by 40% (since 1990) BUT THOSE calculations do not include air and marine transport, defence emissions and the manufacturer of imported goods – which is very convenient as these activities continue to grow at an alarming rate, wiping out all but a few % of those savings.

My grandchildren will probably have a lower life expectancy than me. By the time they are in their fifties they may already experience shortages of fresh water and food. They will be subject to alarming levels of air pollution already responsible for some 40,000 deaths a year in the UK.

We all have a moral responsibility to leave this planet in a fit state for our children. The trouble is we are all too busy trying to earn a living and support our families within the system we have created. Whilst not apportioning blame we have to accept it is flawed and needs to change.

I would ask all of you in this courtroom to reflect on this when you go home this evening. Most of us present here will probably live out their days in relative comfort and prosperity. But if you think beyond your own lifespan what can you expect for your sons, daughters, grandchildren. What is our moral duty?

That’s why I will continue to do what I can to create change.

If not me who? If not now when? I acted out of necessity. My conscience tells me it would be criminal to do nothing.

When my grandchildren grow up and ask me why this has happened, I can’t look them in the eye and say I stood by and did nothing.

If you find me guilty it is for trying to protect life.