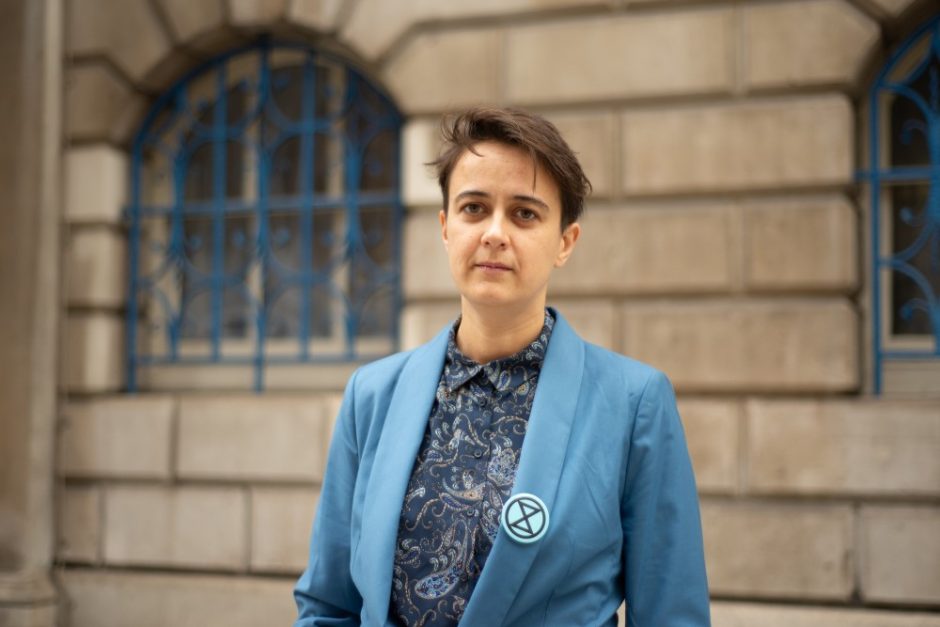 Rosie was arrested on 20th April 2019 on Waterloo Bridge during the April Rebellion and pleaded guilty at City of London Magistrates’ Court on 8th November that year. She was given a six month conditional discharge and ordered to pay a total of £105 court costs.

“I’d like to thank you all for this opportunity to explain my actions on the 20th April 2019. My name is Rosie Poebright and I’m a digital artist, small business owner and currently a PhD researcher. My work centres around finding new ways to help people understand each other better through interactive and embodied Stories.

I’m 39, I’ve been alive roughly the same amount of time the impending human made climate catastrophe has been known about. In these years, rather than taking mitigating action to slow and reverse our impact we’ve been accelerating the process instead.

We’ve come to a point today where the scientific community uses language like ‘Untold Suffering’ when describing their predictions for our future. (I refer here to the recent statement signed by 11,000 scientists that states that the “climate crisis…is threatening the fate of humanity”)

I keep asking myself: why are we all going on as if everything is fine?

I see an answer in my own story. When I was 3 and my mother was 39, she was diagnosed with cervical cancer. In the years since she’s been repeatedly hospitalised, battling first the disease, then the terrible consequences of the experimental treatments she received.

Growing up, the only way to cope in the times between these crises was not to look. To go on as if everything was fine. Because facing the worst kind of catastrophe, losing that person who gave you life, is simply unbearable. So instead, I grew up stood by her bedside trying to look away, stunned into silence and incapable of doing anything.

Those of us alive today now face a similar terrible scenario. The chance to watch a slow destruction of that which gave us life – the stuff we are made of – the wild places, the trees and animals who we belong to, who are part of the fibre of what we are; As we stand by, feeling impotent.

It’s impossible. How can we face this catastrophe? The only option seems to be to look away.

But sometimes life calls on us to face the unbearable.

Three months ago, I found myself again at my mother’s hospital bedside in intensive care. This time, for the first time, it was necessary for me to break the spell of not seeing, to step forward to actively advocate for her amongst multiple consultants, over multiple weeks, to ensure nothing was missed. It’s been exhausting and empowering.

She’s been through so much. She’s frail, but she’s also the strongest person I know And it’s been my life’s honour to step forward and take action for her.

In April, I found myself facing a similar call to act and so I stepped forward. I take no pleasure in causing disruption to normal people. I’ve tried more acceptable paths. Ten years working in an environmental charity. Decades attending enormous climate marches. None of this has created meaningful change. Instead, over these years, successive governments prioritised short term politics and profit over the deep systemic change needed, so that those yet to be born, our children, our grandchildren, my niece Elsie and nephew George, can live in a world that can support and nurture them, just as it’s nurtured us.

This is why I sat on Waterloo Bridge and didn’t move when instructed by the police officer. It was an act of necessity, grown from a love for life, a love for people and a love for this extraordinary world. A love that requires me to step forward and act.

The impact of Extinction Rebellion’s action in April has been to provoke a new level of public consciousness about the Climate Emergency. It was done consciously to prevent a harm so much greater that it’s actually devastating for any one of us to face it alone.

I’ll end by saying this.

We don’t need to face it alone. This is an unbearable grief made bearable by sharing. In April, as I sat with new friends on Waterloo Bridge, waiting to be arrested, our hearts were wide open. We remembered old friends lost young to suicide: to it being too hard for some to stay in this world the way it is, in a culture so disconnected from itself.

We talked about Leo, my friend’s newborn baby: strong, growing bigger every day.

We talked about Mary Oliver’s poem Wild Geese, the world offering itself to our imaginations. And our place in the family of things.

The time has come for all of us to break the spell of not seeing and to step forward.

Whether that be through talking with friends, family, work colleagues. About what’s to come. About those things that we love. Or sitting on a bridge and deciding not to move.”