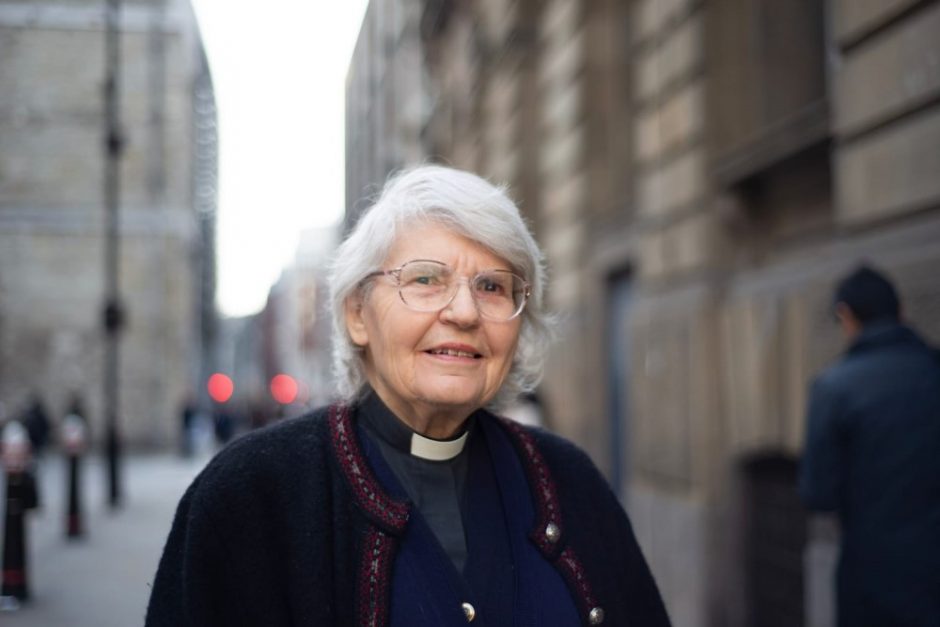 Sue was first arrested for lying in the road at Oxford Circus during the 2019 April Rebellion. She was charged under Section 14 of the Public Order Act, and tried on 5th February 2020 at City of London Magistrates’ Court. She was found guilty and given a nine month conditional discharge and £350 court costs. She has been arrested six times now for XR actions and been charged five times, two for the 2020 September Rebellion.

On 18th March 2021, she was arrested for contempt of court after gluing herself to the furniture and live-streaming from City of London Magistrates’ Court whilst standing trial. Sue, and her Mackenzie friend Ruth Jarman, who also took part in the contempt action, were released under investigation. She had expected to be sent to prison.

Sue wrote about her experience of being arrested as part of our April Rebellion anniversary celebration in 2020. Being arrested on Maundy Thursday had a special poignancy. In her own passive surrender to the authorities, she found a unique sense of empowerment.

“The first week of the April Rebellion last year coincided with Holy Week, which commemorates the events of Jesus’ betrayal, arrest and death before His Resurrection on Easter day. For members of Christian Climate Action, to which I belong, the week therefore had particular significance. We tried to bring the symbolism of the events from our faith story to bear upon the protest we were making.

And so it had a special poignancy for me to be arrested on Maundy Thursday – soon after a member of Christian Climate Action had conducted the traditional ceremony of foot washing for all who wanted to join in, as they lay on the road in Oxford Circus, waiting for the police to move in.

As the police helped me to my feet, all I could think was “this was the night that Jesus was arrested; this was the night that He handed himself over to the authorities to do whatever they saw fit”. It felt a singular privilege and whatever was going to happen to me didn’t really matter at all. I knew I was doing the thing that needed to be done and that in this passive surrender of my liberty and my will, I was able to exhibit a powerfullness that was beyond anything I had ever done before in my small efforts to influence the Government to respond to the impending climate catastrophe.

At my trial the following February, I was able to bear witness to my fundamental belief that if we are to survive as a race and as a creation, we shall have to take, and continue to take, the most radical, unpopular, counter-intuitive action, including acts of civil disobedience, whatever the cost in terms of our personal well being. Like many before me and alongside me now, I know I can do no other.”