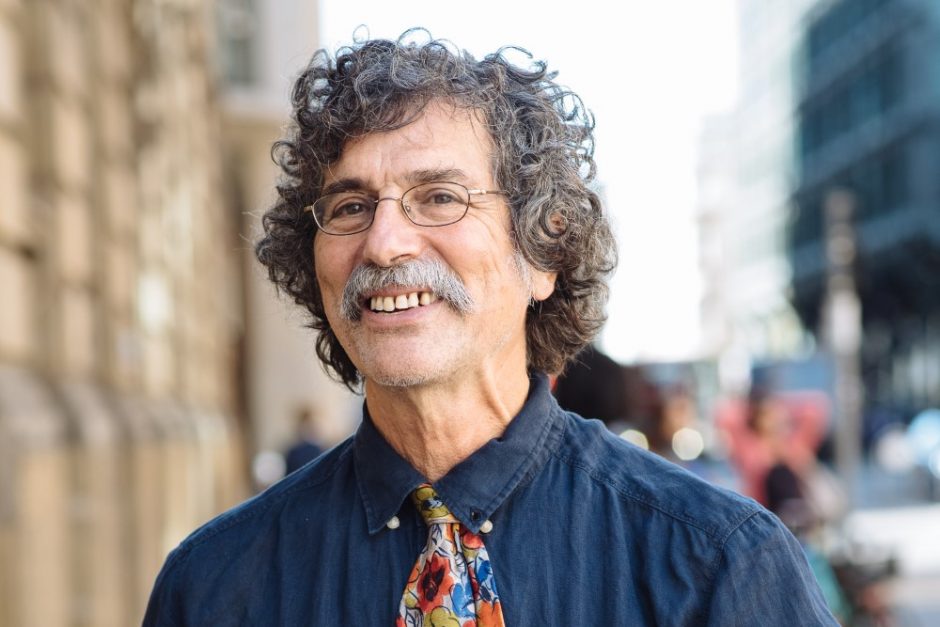 Merle, who is originally from Los Angeles and is also a poet and green belt campaigner, was arrested during the 2019 April Rebellion and charged under Section 14 of the Public Order Act. He pleaded guilty at City of London Magistrates’ Court on 13th September 2019 and received a six month conditional discharge and £105 court costs.

He was arrested again on 14 October 2019, while glued to an Oxford philosphy don in front of the Bank of England, as part of the 2019 October Rebellion. He was charged with Obstruction of the Highway and pleaded guilty, in his absense because of Covid, at City of London Magistrates’ Court on 4th December 2020. He was fined £115 and order to pay £117 court costs.

“I regret that I cannot be here with you today, to make my statement in person – I do think that it is important that we know each other, even in some small way.

This is who I am: 72 years old, poet, father, gardener, campaigner for nature reserves and green belt, retired civil servant, former teacher in Africa, charity fundraiser – for 20 years, I have raised the money each year to pay for all the development work in one village in Tamil Nadu – chair of a local environment group in Coventry. I was born in America but Coventry and Warwickshire are now my second home. I have always paid my taxes and sought to contribute to my community. I don’t drive too fast, and never litter – actually I walk around with a bag and pick up other people’s trash.

I freely admit to sitting in the road in front of the Bank of England on 14 October 2019, but I do not think the court should punish me for doing so.

I acted purely in the public interest, in the face of extreme and immediate danger to both human life and property – the cataclysmic threat of human induced climate change.

Every week, another climate change calamity is in the headlines. Our situation is bad and getting worse. A year ago, we learned that we have just 10 years, to get back on track and avert the worst effects of climate change: the flooding of coastal cities, summers so hot that no one can go outside, drought, crop failures, mass extinctions in the natural world, apocalyptic wildfires, terrifying uber hurricanes, and water wars to name but a few.

This summer, forest fires incinerated an area bigger than Connecticut and killed 31 in the mountains of California. Today, I found out that the arctic ice is at its lowest ebb for 42 years. It means that the polar bears starve, because they can’t hunt for seals from the ice. A couple weeks ago two category 4 hurricanes – with winds of 140 miles per hour, two hope-destroying devils called Iota and Eta – blasted into Nicaragua in astonishing quick succession, flattening everything. Scientists tell us that storms are getting more destructive and more frequent, because of global warming.

If there is any lesson to be taken from the Covid19 pandemic, it is that dithering makes a crisis worse. For 28 years, since the Rio Summit in 1992, the world has failed to reduce carbon emissions. They have actually become much much worse. If you learn anything from this statement, you should take away the knowledge that, since the Summit in 1992, when our leaders solemnly promised to halt climate change, more carbon has been emitted than in all of previous human history. They failed.

Our normal democratic process – elections, debates in parliament, campaigning, publicity in the press and media, peaceful marches, David Attenborough documentaries – did not bring us the changes that are needed to limit climate change to 1.5degrees C. In 1992, we could have taken gradual steps towards a zero carbon economy; Now we need to reduce our carbon emissions by 7% a year. That’s a heck of a lot, and we are nowhere near to achieving that.

I argue to you, that it was necessary to take actions which would shock and arouse the public and politicians and civil society to the peril we are in. Nothing else was working. For 28 years, governments failed, the media failed, business failed.

I argue to you, that it was necessary to block the road, and stop traffic from moving. Nothing else, all our polite and preferred means of protest and politics, had worked, for years and years, despite strenuous effort.

If we admire Rosa Parks and Martin Luther King and Mandela and Mrs Pankhurst, with the wisdom of history, we cannot avoid the conclusion that it is sometimes right to break the law.

I argue to you that nothing less than focussed, non violent civil disobedience would have sufficed. The police may argue that individuals have a right to proceed about their lawful business – to drive down Threadneedle, to ride a bus along Cornhill. But I do not accept that it is an absolute right to drive down a street – it is abrogated routinely, in the public interest, to fix the road, repair water mains, allow carnivals etc. In this circumstance, it is both proportionate and right, to exercise my article 10 and 11 ECHR rights, to assembly and to freedom of expression, by blocking the road – when no other measure would have sufficed. The roadblock was limited in time, peaceful, and entirely non violent. Both the police and London Transport were informed in advance and could have re-routed buses and traffic. At all times, emergency vehicles were allowed to pass.

I submit to you, that it is not in the public interest to arrest or charge or punish me and others who participated in this event. We acted in the highest public interest.

In case you think I exaggerate, I will finish with this quotation, from António Guterres, Secretary General of the UN about the gravity of this present moment, issued in Sept 2019, a few days before we stopped traffic at the Bank of England, in October 2019 .

“Nature is angry,” said Guterres, who recently returned from a visit to the Bahamas, where Hurricane Dorian unleashed what he called “total destruction”. He further cited ferocious drought in Africa, melting glaciers, bleaching coral reefs, the hottest month in recorded history last July, and potential future sea level rise of 10 to 20 meters (33 to 66ft) as evidence that, “You cannot play games with Nature. Nature strikes back.”

You have it within your power, to take the widest possible view of this matter, to look beyond the ordinary ways magistrates and the law deal with infractions, and to make the law into a genuine instrument of public protection, in the most appropriate and powerful sense – to recognise the climate emergency as a very material factor, in the decision you make, and to decide accordingly.

If London is flooded in 50 years time, which would include this courtroom – that is a real possibility – no one will look back and say to themselves. “It was a really good thing that the magistrates and the police and the prosecutors strictly enforced the laws of obstructing the public highway”. It is not what is needed now.

Thank you for listening.”