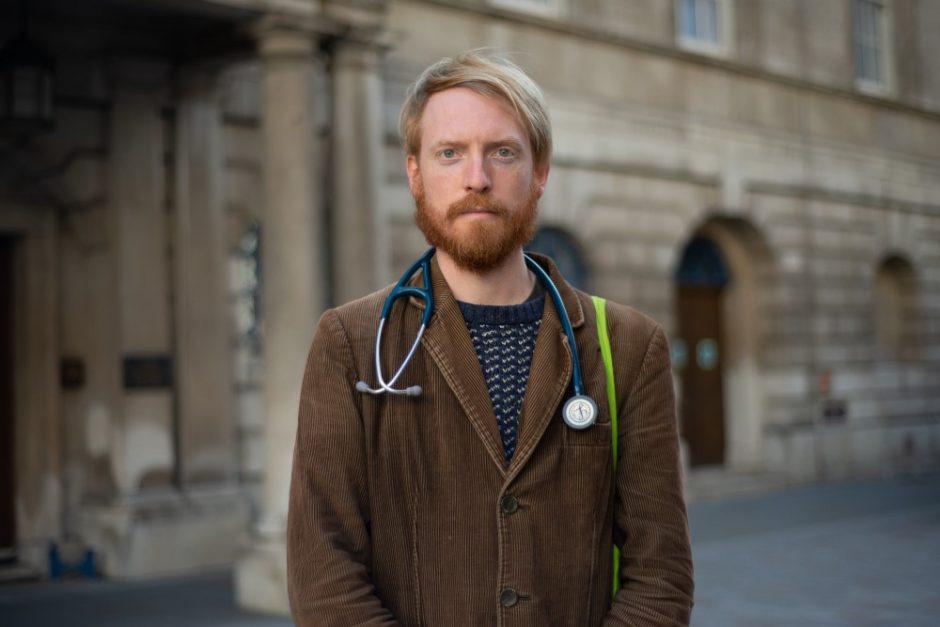 Malcolm was arrested on 20th April 2019 at Parliment Square during the 2019 April Rebellion under Section 14 of the Public Order Act. He pleaded guilty on 18th Oct 2019 at City of London Magistrates’ Court and received a six month conditional discharge and £70 court costs.

“My name is Dr Malcolm White. I am from the North of Scotland but live in Glasgow. I have travelled down for a second time to participate in the Extinction Rebellion protests. In April I was arrested as part of the Parliament Square actions. I was then held in custody for over 20 hours before my interview took place. I knew that there could be implications for my career, and that I could get a criminal record, but I felt a moral imperative to act. I do not regret that decision.

The projected future of climate change and biodiversity loss weighs on me heavily in my mental health and when addressing important choices. I have decided not to have children of my own – a decision that leaves me deeply saddened. My own life will be impacted of course, but moreso the lives of future generations. I think of my young niece and other children in my extended family and am distraught as to their future. I have also decided to move my career to one that ties more closely with my values of tackling the crisis, and so I am applying to public health training this year. Collectively, these are also significant drivers behind my decision to be involved in climate activism.

During my work as a doctor I focus on the health of the population. I feel strongly that my care for others has driven me to act in the face of the climate crisis – in defense of the health of all.

The eminent medical journal, The Lancet, has repeatedly stated that the climate and ecological crisis is the greatest threat to public health that the world faces in the 21st century. Institutions such as the World Health Organisation are in agreement and the impacts of runaway climate change on the health of our populations cannot be understated.

It is a tragedy that the effects of climate change are already impacting many who live in poorer parts of the world, and that very few are reporting this in the media at all, never mind consistently. Extreme weather events, rising sea levels as ice-shelves melt, drought, desertification and crop failures are happening now and unfortunately will only worsen as this crisis deepens. Significant challenges to everyday life breed political instability, civil unrest and war. It won’t be many years until issues such as these reach European shores. However, if we wait until more serious implications of climate change reach the UK before we treat it as a true emergency, we will have ignored the death and suffering of fellow humans. Our lack of action will say loudly that we do not value their lives as much as those who live in richer parts of the world. A further insult to justice is that richer nations actively instigate conflicts, while their businesses sell the deadly weapons involved. At the same time the underlying drive is in order to source oil.

Considering how Europe (and particularly the UK) reacts to immigration from a humanitarian crisis such as Syrian and North African refugees, I dread to think how the hundreds of millions of climate refugees that are predicted will be received by richer nations.

The industrial revolution started in the UK, with Western nations benefitting from use of fossil fuels to create the powerful and wealthy nations we are today. However this has come at a terrible price, with colonial exploitation, slavery and cultural and societal genocide of poorer nations in order to extract resources, profit and further power. Similar practices still go on today in neo-colonial and capitalist exploitation. This is before noting that the secondary effects of fossil fuel use in terms of waste products and their contributions to pollution and rising temperatures are disproportionately affecting poorer nations around the world who have less resilience to cope with the damage.

These systems cannot be allowed to continue. I feel that as people are made aware of this they have a moral obligation to act. I say this, aware that the context of one’s life determines the amount of time, energy and resources that they are able to put into fighting injustice. However those we ‘democratically’ elect to deal with issues of great significance are not acting in a manner commensurate with a climate emergency.

Aside from it seeming prudent to decarbonise our economies as rapidly as possible, the XR demand to reach carbon neutral by 2025 in part recognises the economic privilege we have in this country. We are one of the few nations that have scope to invest heavily in clean energy, transport, food and housing – all of which will be required to reach net zero. The technology already exists to achieve this without use of additional measures such as carbon capture and storage. It will require strong leadership to either implement these absolutely essential policies, or to hand these decisions to processes such as citizens’ assemblies before implementing their recommendations.

From a political position it is clear that Extinction Rebellion’s efforts have repeatedly pushed climate change to the top of political agendas. Towards the end of the April actions, the labour party brought a declaration of climate emergency through Parliament. John McDonnell went further, stating that XR’s actions had directly inspired subsequent policies regarding climate change. Despite this success we remain on path for temperature increases that will further threaten the stability of our societies and the lives of future generations.

The Intergovernmental Panel on Climate Change report in 2018 suggests that we need to achieve global carbon neutrality by 2050, and this was the major driver behind the Committee on Climate Change’s recommendations to the UK government of 2050, with Scotland achieving this by 2045.

Putting aside the enormous difficulty of convincing every nation to achieve carbon neutral by 2050, it still allows a 1 in 3 chance that we will exceed this ‘safety line’. Keeping in mind that we have already exceeded 1.1 degrees of temperature rise, and the impact that is already having around the world, it seems alarmingly conservative to allow this degree of risk when planning global efforts to tackle our escalating crisis. If irreversible feedback loops kick in this may spell the end of our species.

A valid criticism of XR is that many of our actions disproportionately affect those in London with lower income, those who rely on bus transport and those on zero-hours or fixed term contracts. I agree and feel upset by this. We do not wish to give up our energy and even freedoms to be arrested, but we feel so strongly about this and have so much fear for the future that we don’t feel we have any choice but to cause this disruption. Furthermore, given decades of petitions, marches and writing to MPs having very little impact on our emissions trajectory – I strongly feel that non-violent direct action is justified in calling government and corporate business to account.
However, the sad truth of our situation is that the disruption of climate change is going to be wide-reaching and will be felt throughout our society. This will wildly outweigh the disruption that people are experiencing from our protest actions. We are undertaking these actions to fight for all of our futures.

When there are significant restrictions imposed on our right to protest – such as confiscation of disability access infrastructure and completely banning our protest within the whole of central London, this pushes groups to take more radical action. This is undergoing judicial review, but I hope that this removal of our human rights of protest is as chilling for the court as it is to me.

I genuinely wonder how those facilitating the arrest, charge and conviction of XR rebels reflect on their involvement in the process…? They may see it as a waste of their time, but in what sense? Is it because they do not agree with the premise of the protests, or because they feel obliged to act in accordance with the law as it is their job, despite this being contrary to their moral stance? Or instead do they feel their role and time is justified in keeping law and order in place – supporting the society that we live in, perpetuating these injustices? I often hear that everyone needs to make a living, but do not see justification in supporting this system that criminalises peaceful protesters, holding legality in higher esteem than morality and the common good. I encourage you to join us in challenging these failings in our legal system.

Whilst I have pleaded guilty I struggle to respect the basis of these charges and have attended court to avoid further personal consequences and to make this statement. I felt morally compelled to act against our government. I still do. Their lack of action in tackling the climate and ecological crisis has deep roots in vested interests alongside a belief that endless economic growth is possible on a planet of finite resources. It’s disheartening to admit that I do not have much faith in the UK democratic system, or its ability to stand up to corporate power.

I do have faith in the goodness of people, but this requires space to flourish. The state of numbness and apathy that I see so often in our population is a response to our toxic system of endless consumerism.

I say again that I cannot accept these systems as they stand. The injustice rankles deeply with me and that is why I will continue to non violently act against them.

I act for myself, my family and my friends. I act for those who are suffering now and for the generations who will follow us. I act to limit the manipulation, control, harvest and extinction of the many species that are threatened today and in the future.