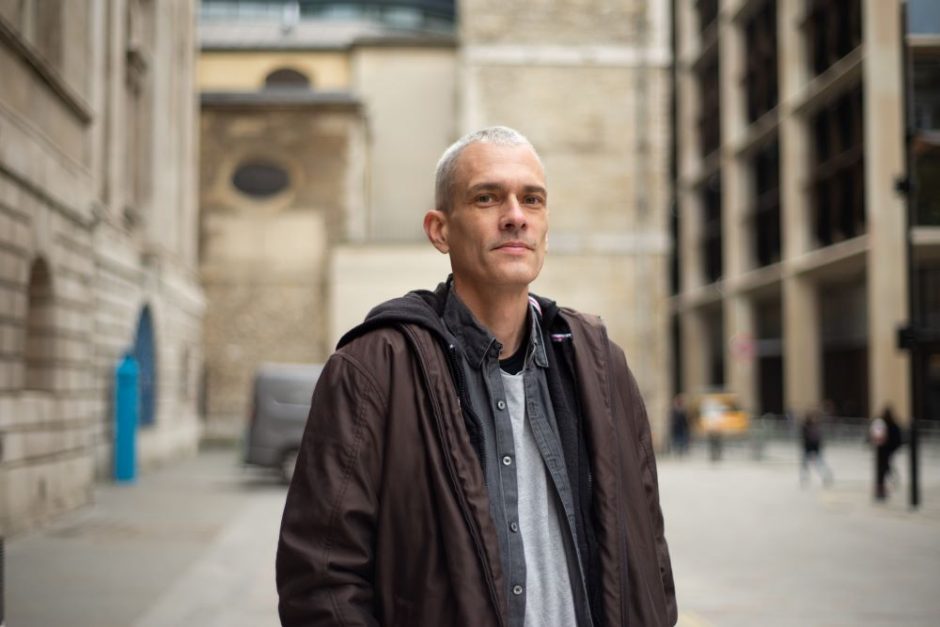 Nathaniel, who is originally from the USA, was arrested on Waterloo Bridge on Easter Morning during the 2019 April Rebellion, and charged under Section 14 of the Public Order Act. He pleaded guilty at City of London Magistrates’ Court on 8th November 2019 and received a six month conditional discharge and £105 court costs.

“I stand here with humility and respect. I’m a proud British citizen, grateful to the only country in the world that allowed me to live legally with my husband, as my husband. I have the deepest respect for the police and judicial system and regret the burden I have imposed.

But I also stand here under a heavy burden of loss. Growing up proud of our Native American ancestry, my parents instilled in me a love for and connection to nature that is the foundation of my joy, solace and sorrow.

In California, my grandfather showed me a thousand acres of woodland sustainably managed for a century, felled in a season by a corporate raider. In Singapore, I watched smoke from a virgin jungle clearing grow from faint haze to public health crisis. I’ve swum coral reefs reduced to rubble by dynamite fishing and acidic seas. I’ve witnessed the destruction of the landscapes that made me complete.

I stand here too out of desperation. I have battled depression, I have felt isolated, I’ve felt insane. I’ve given up on my longest held dream – to have children, to give my parents grandchildren. I’ve signed petitions, written letters, donated to charities, lived as responsibly as I knew how to. And destruction increased, exponentially.

I am also here in fear and rage. For the first 6 days of the protest, I watched people with much more to lose than myself chose arrest. I looked to BBC London for information but saw not a single report, despite the rebellion being one of the biggest acts of civil disobedience in the city’s history.

I began to research the science. I read IPCC reports, Jem Bendell’s Deep Adaptation, Guardian articles and their sources, scientific journals. Sorrow overtook fear. The most important information of our generation was being buried in footnotes and back pages. The BBC hadn’t even broadcast the UN’s declaration that climate change poses an existential threat. Things were much, much worse than imagined.

During my lifetime, more than 50% of the world’s coral has died (ICRI, NOAA, Reefbase, The Ocean Agency, Status Report). This week we will each eat 5 grams of plastic (WWF / University of Newcastle, Australia). Today 200 species will go extinct and 25 Londoners will die of pollution related illness
(UN Environment Programme)) / (GLA / King’s College London). At best, I believe we have 10 years to completely change society, faster and more drastically than it has ever changed before.

The government has promised carbon neutrality by 2050. I do not believe this is a scientifically supported deadline. The projections this is based on rely on a linear model. In the past two years, data have proven climate change is not linear, it is exponential. By some estimates, 2025 carbon neutrality may only provide us 1 in 5 odds of avoiding complete ecological collapse on a global scale (Gail Bradbrook).

At the risk of wearing out a tired analogy, we are in a burning house. At the time of my arrest, the press was refusing to report there was a fire at all and the government was systematically dismantling incentives to reduce carbon emissions.

On Easter morning, on the way to brunch with friends I’d not seen in 10 years, I detoured by Waterloo Bridge. A protestor sitting in front of me was arrested. Something snapped. I could no longer remain a privileged bystander watching others sacrifice on my behalf. I sat in her place and was almost immediately arrested myself.

This was not a decision made lightly. Personal consequences include the possibility of never seeing my family, or my husband’s family again. An arrest record could also bar me from from one of the most cherished aspects of my work.

I believe a great injustice is being performed in this courtroom today, one I recognize we are all powerless to stop.

Section 14 is a blunt instrument, designed to prevent disruption to the community. It does not anticipate the situation we are now in. It is consistently argued that sending us here today was necessary to stop merchants from losing trade, emergency services from performing their duties and transport from delivering workers to their jobs. I deeply sympathise with those disrupted. But I have never seen shops busier than during the rebellion, nor have I seen ambulances move faster than on a street cleared by protestors. I have seen commuters more gravely disrupted by marathons, processions and sporting events.

I would very much like to know how separating families and jeopardising careers is weighed on this scale. Or how those less privileged rate democracy when they’re excluded from peaceful protest. And who benefits from prosecuting this offense?

If we can agree with top scientists, with the UN, with our own government’s subsequent emergency declaration, then which action is more truly in the community’s interest: prosecution of Section 14 or sitting peacefully in the road until the alarm is heard? If we are not to sit in the road, what are we to do? What alternative was there?

It cannot be argued that the demonstration was ineffectual. The first message on my phone, following release, was from a friend who saw my arrest on the BBC London news. The first televised reportage I am aware of. A week later, the UK became the first country to nationally declare an Environment and Climate Emergency.

I stand here, reading this, because I believe every last one of us needs to think very, very clearly about our role in the history that is unfolding at frightening speed.The comfort of daily routine is misleading, we live on the thinnest of membranes. For ourselves, for our children, for all that we value, we must change the context of our thinking.

We must adapt or disappear, and adapt more quickly than we ever have before. We live in terrifying, unprecedented times, times of bereavement and disruption. We must all be the very best we can, if we are to be worthy of a future.”