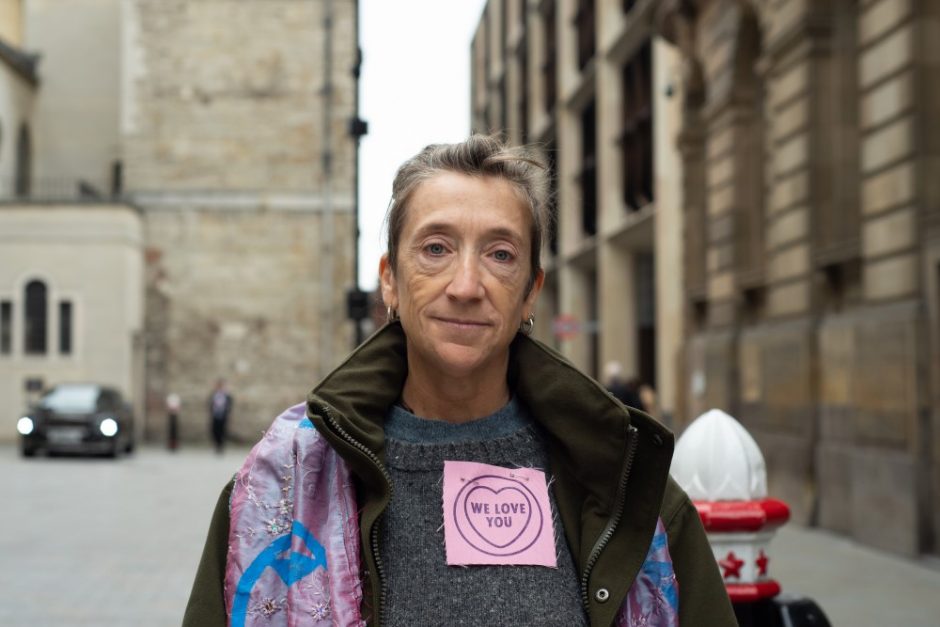 Kate was arrested with her daughter Sibi on 25th April 2019 outside Goldman Sachs during the 2019 April Rebellion. She pleaded guilty on 4th October 2019 to a Section 14 offence and Obstruction of the Highway at City of London Magistrates’ Court and received a six month conditional discharge and £70 court costs. She was arrested again in July 2019 for aggravated trespass during an action outside Barclays Bank in Llanelli.

“When I was giving birth to her I was giving birth to a young person who was likely to be an eco warrior, and that is what she has become and I am absolutely proud of her. I did some protesting in the 1990s and there was never the sort of support you get with Extinction Rebellion, it has great support systems in place.”

“I felt really proud when we were together, because I feel a lot of people still haven’t got to the point of understanding about the emergency we’re in. A lot of people are afraid to act and I know we were both afraid in some way, and it’s fine to be afraid, but the fact that we actually got out there and did something, I feel really proud of that. If I had a child I’d want to be doing this with them as well.

It felt important to target the financial district, to send a really strong message. It was something we just really wanted to do.

There were lots of people in court today who said they had tried loads of other ways. They’ve talked to MPs, they’ve stood out with placards. I’ve done that in the past, I’ve done leafleting and talking to people – but its not loud enough. It’s got to the point that we have to put ourselves on the line and we are in a really privileged position to be able to do that. So if our voices are not being heard, our actions can be seen and heard.”

“My name is Kate Moore. I have had breast cancer twice. I don’t know if you or anyone you know or love has had cancer, [but] for me, [upon] waking throughout the day, [it was a] shock, like a lightning bolt through my body, [constantly] re-experiencing the doom that filled my entire being.

At the International Rebellion in April I recognised that same feeling embodied in a young man who has been involved in Extinction Rebellion for a long time. He has given up his University course. Started to be aware of his feelings of doom, and catastrophe, of anxiety in his body. He cannot feel any excitement or ability to plan for the future. This, I believe, is criminally negligent.

I know a young woman who gets so overwhelmed with anxiety and panic about what is happening ecologically and what may happen to her, her family, her lost life and all other life on earth as the catastrophe draws nearer to our country. She cannot function on a normal daily level and this disables every aspect of her life. This, I believe is criminally negligent.

My son has his birthday today, he is 17 years old. when I gave birth to him and thought of his future, I did not think ‘He is unlikely to be safe, he’s unlikely to grow to be a father and a mature adult’. This is a Western and a white privileged view to be sure. But when the cause of my children’s early deaths are due to a toxic unsustainable system, rather than the natural order, this too, I believe, is criminally negligent.

The government are not warning us clearly about how severe the risk to life is. I’ve followed human tragedies and there is a fine line between life and death.

The government is choosing death.

This is why I’m choosing to get arrested. My hope is that my sacrifice will benefit others.

I’d rather struggle now, than see or hear my children struggling to find food, water or medicine.

There is no ahead, no fantasy, no daydreaming, no imagining what possibilities lie in store. For me there is no choice.”