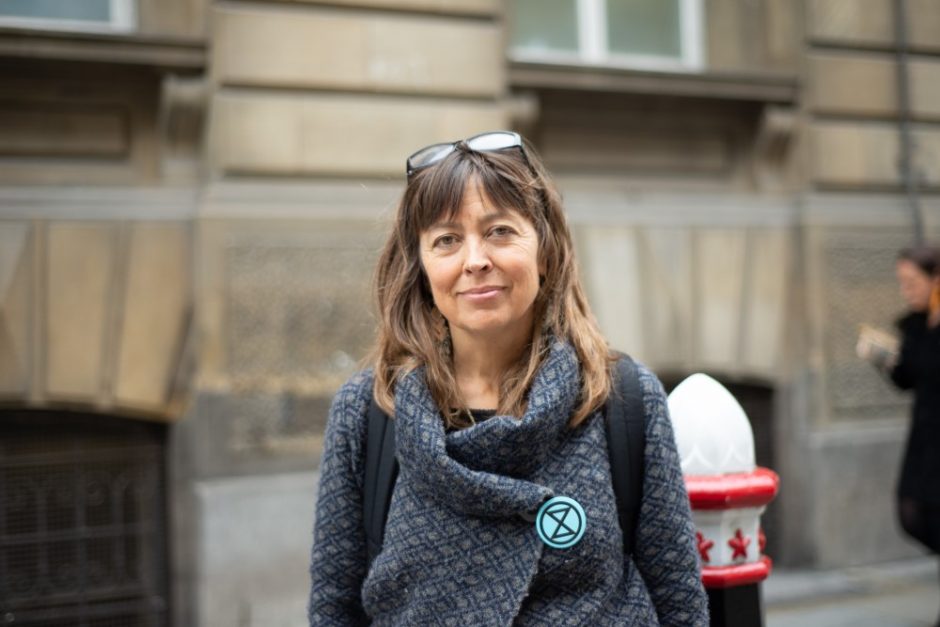 Jay was arrested at Oxford Circus during the 2019 April Rebellion under Section 14 of the Public Order Act. She was tried on 28th January 2020 at City of London Magistrates’ Court and received a nine conditional discharge and £220 court costs.

In his concluding remarks, Judge Noble told Jay and her co-defendants:

“You have to succeed. It is with a really heavy heart that I have to convict you. This is going to be my last Extinction Rebellion trial for a little while. I think they only allow us to do so many of these before our sympathies start to overwhelm us. When I started, I was fully expecting to see the usual crowd of anarchists and communists. I have to say I have been totally overwhelmed by all the defendants.”

“I want the court to know that for me it has been incredibly hard — frightening, actually — to get to the point where I break the law and risk becoming a convicted criminal. I have needed a lot of help and support along the way, and I am really touched that, unprompted, my expert witnesses offered the following words. It meant a lot to me to read them.

Former Ambassador John Ashton writes EXHIBIT 3 (Para 12): “The decision to participate in direct action of any kind is intensely personal, especially if it might lead to arrest and a criminal record. In the case of the climate crisis, future generations will look back on those who made that commitment, and who acted peacefully and with compassion towards their fellow citizens, as heroes in a justified struggle. … They are far from being criminals. And if, from an excessively narrow perspective they can be alleged to have committed any crime, they will be seen to have done so only in pursuit of the true public interest in preventing a greater crime from being perpetrated.”.

Professor Lewis writes EXHIBIT 4 (Page 5): “To criminalise Extinction Rebellion would be, in effect, to penalise an example of good and thoughtful citizenship. It would, in effect, send a message that the minor inconveniences caused by their actions are more important than the most serious threat to life on earth humankind has ever faced, one that places us and future generations at risk. … History will judge them in the same way we now judge the civil rights movement.”.

Sometimes it falls upon a generation to be great, said Nelson Mandela. History is calling from the future, a hundred years from now. Half a hundred years. Ten. Today. Calling the conscience of all of humanity to act with the fierce urgency of now. This is the time. Wherever we are standing is the place. We have just this one flickering instant to hold the winds of worlds in our hands, to vouchsafe the future. This is what destiny feels like. We all need to live by a credo that matters. This is mine. We have to be greater than we have ever been, dedicated, selfless, self-sacrificial.

Humanity itself is on the brink of the abyss: our potential extinction. We face a breakdown of all life, the tragedy of tragedies: the unhallowed horror. Time is broken and buckled, and seasons are out of step so even the plants are confused. Ancient wisdoms are being betrayed: to every thing there was a season, a time to be born and a time to be a child, protected and cared for, but the young are facing a world of chaos and harrowing cruelty. We are nature and it is us, and the extinction of the living world is our suicide. Not one sparrow can now be beneath notice, not one bee.

Only when it is dark enough can you see the stars, and they are lining up now to write rebellion across the skies. There is no choice. This is a rebellion for the young people and for the grandmothers. This is for the turtle and the salamander, the dugong and the dove. It is for the finned, furry and feathered ones, the ones who scamper and swim, the chattering, chirping and hooting ones.

Each generation is given two things: one is the gift of the world, and the other is the duty of keeping it safe for those to come. This contract is broken, and it is happening on our watch.

Worldwide, the heaviest emissions have been produced by the richest nations, while the heaviest consequences are being felt by the poorest. The few have sown the wind, and are forcing the many to reap the whirlwind.

Extinction Rebellion’s vision is a politics of kindness. Its vision depends on values that are the most ordinary and therefore the most precious: honesty, decency, fairness, and care, knowing that the finest technology we have is love.

This vision has a map. It is the map of the human heart. Believing in unflinching truth, reckless beauty and audacious love, knowing that life is worth more than money and that there is nothing greater, nothing more important, nothing more sacred than protecting the spirit deep within all life. This is life in rebellion for life.

This credo is what brought me to standing in the dock here.

I am wearing this bracelet. A mother came up to me in Oxford Circus with her daughter, about five, who had made this ribboned wristband, and her mother asked me if I would mind wearing it. Would I mind? It’d be an honour. It was to say thank you to people who were willing to be arrested, she said. So I wore this for the child, as she had made it for me. Without knowing each other. And that is the point. That we will hold the hand of strangers, a little bit of me stays with her, and a little bit of her stays with me. The bonds between us all.

I am not going to talk about the law. I am going to talk about justice. At the Rebellion in April last year I saw one of the most poignant things I have ever seen. On Waterloo Bridge, amongst reams of forget-me-nots, a little girl in a red cape was writing in chalk on the tarmac. She wrote: ‘There is no planet B so we’re asking for your hep.’ She examines what she has written, then carefully adds the missing ‘l’. Help. She walks away. Then she stops, turns back, studies it again, kneels down and adds ‘Please.’ It is unbearably painful to see a child on her knees pleading for her life. This is injustice of the most damning sort: that children are facing lives dramatically and horribly affected by the climate crisis. Really seeing the truth of this situation is terrifying and full of grief.

There would be justice if her plea was heard. Justice if her life was protected. It would be fair and just if the next generations could grow up without feeling terrified, with reason, of what the future holds in a world of climate crisis, whose imminent threat of evil will be so great that it holds all other evils within it. All forms of brutality, rape and murder. I feel passionately that we need to protect life — in all its forms — and to act with justice towards future generations.

The job of a writer is to be a good messenger for others, even if it is difficult. A few years ago, I went to West Papua, to talk with Indigenous people there, who are the victims of a genocide because their lands are being seized for extractive industries. It is a microcosm of the situation many indigenous people are in. A few years before I visited, writers and reporters had been shot for covering this genocide. Yes, I was scared. Yes, I went. It is Indigenous People who are at the sharp end of the climate crisis, they who are losing their land and water, their lives, and their languages and culture. It is their children more than any who risk losing their lives because of the climate crisis. This is for the children.

I love children and always wanted a child, but I am truly relieved now that I do not have one, because I would at some point plead with them not to have a child of their own. My own grandmother was a Pankhurst, and I am happy to follow in those footsteps except for one thing: I would not want to be a grandmother myself.

I am here looking for justice in all its beautiful forms, knowing that every one of us alive on earth today needs to be looking to a very different court in a very different future, to assess our guilt or innocence.

In Oxford Circus, I was passed a little handwritten note. It said “I can’t get arrested because I am only ten but thank you for doing this for me.”. It is my vow to live guided by justice for the world I love, a world where in the eyes of a child I am innocent.”

Read Jay’s full defence statement, including expert witness statements from John Ashton who was the British Government’s climate change Ambassador and Special Representative for three successive Foreign Secretaries; Professor Justin Lewis, Professor at Cardiff University Research Centre in Journalism and Media; and George Marshall, specialist on climate communications for the IPCC and the UK government. Her book Why Rebel is published by Penguin.