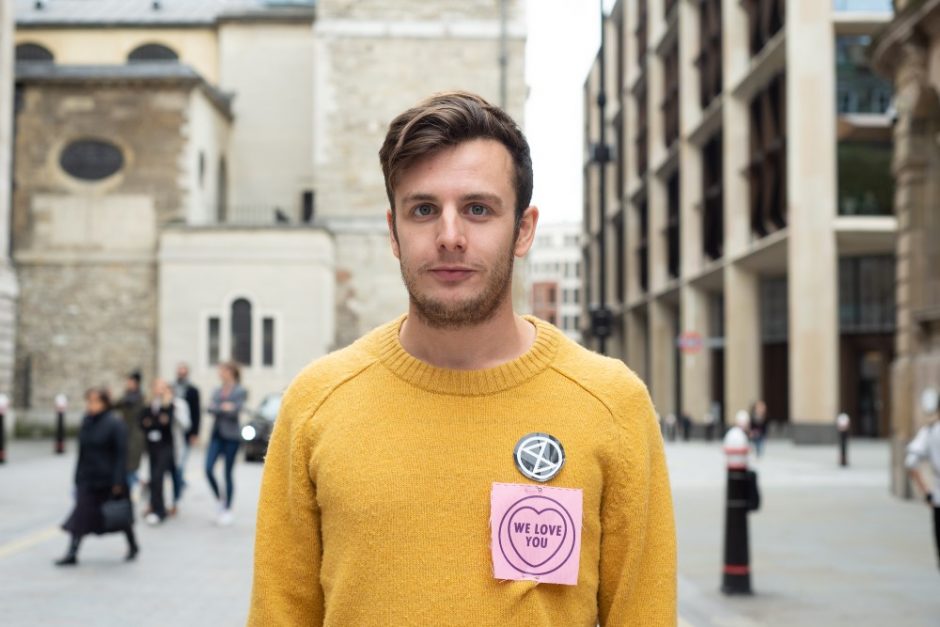 Graham was arrested on 20th April 2019 at Parliament Square during the 2019 April Rebellion under Section 14 of the Pubic Order Act. He pleaded guilty on 2nd August 2019 at City of London Magistrates’ Court and received a six month conditional discharge £105 court costs.

“Thank you – I’m grateful for the opportunity to speak. Like most of those currently being prosecuted for their roles in the April Extinction Rebellion protests, I am not in the habit of breaking the law. Indeed, like most of them, I am not here because of a lack of conscience or a lapse of judgement but because my conscience compelled me to break the law knowingly and out of love and fear for our planet and its people and wildlife.

I understand that my actions have had negative consequences for others – those stuck in traffic, or those whose businesses suffered or were disrupted. I sympathise with those people and I accept that they might rightfully be angry or upset. And I regret that these actions have become necessary. But I will not pretend to regret the actions themselves because it is clear that they were necessary, to avert immeasurable human suffering and environmental destruction.

It is now about 50 years since scientists widely began to predict global heating as a result of greenhouse gas emissions and to warn of the potential consequences. In the decades since, concerned citizens have joined scientists in trying to persuade governments worldwide to heed the warnings of the science. The result has been that we are still on course for catastrophic climate change with little more than lip service paid by successive governments to the enormity of the danger we face.

Time is now running out. The trends in global carbon emissions are exponential. The latest IPCC report looked at the difference in effect of a 2°C temperature rise vs 1.5°C and found that that half a degree of warming makes a drastic difference – and that any warming above 1.5°C is likely to lead to prolonged irreversible changes such as extinction and ecosystem loss. Understand then that the world is currently on course for not 1.5 or 2 degrees of warming but more than 4 degrees, with consequences so dire as to be unimaginable. And understand too that so far, the forecasts of every IPCC report have turned out to have been too optimistic about the pace of climate change as temperatures have risen.

Already there is loss of life and ecosystems from climate breakdown. The difference between acting now and acting in say 5 years’ time could easily be the difference between 1.5 and 2 degrees of warming, or between the suffering or displacement of millions of people versus billions.

Even thinking only selfishly we should not kid ourselves that the effects will not be felt here. As I speak, the town of Whaley Bridge in Derbyshire sits evacuated beneath a dam that threatens to burst after the heaviest rainfall in living memory. The highest temperatures ever recorded in the UK happened less than a fortnight ago, and the Met Office reports that the ten hottest years in well over 100 years of UK temperature records have all occurred since 2002.

Each day we delay, each day that decisive action is not taken to address the crisis, corresponds to a material difference the ultimate scale of the tragedy that is to come, a material difference in human lives. It cannot wait until an election. It cannot wait for the government to start listening to the advice they have been ignoring for decades. They must acknowledge the reality and we must act now.

I said earlier that campaigns to date have failed to make governments take heed of the situation and act with the necessary urgency. Conversely it is clear that the protests in April, which ultimately have resulted in this prosecution and many others like it, have succeeded where those previous, less disruptive campaigns failed, and that this is a direct result of those disruptive actions, mine included.

Who had even heard the term climate emergency before extinction rebellion brought it to the fore? Where was a declaration of climate emergency, or a commitment to net-zero emissions by 2050 in the Queen’s speech? How often was climate change in the headlines? Clearly these things were precipitated by Extinction Rebellion’s protests and demands.

As such I would ask you to consider not only what harm my actions may have caused, but also what positives may have come of them.

The metropolitan police cite in the imposition of the section 14 order, the impact on bus routes and local businesses. What about those whose lives were improved as an immediate result of the rebellion? The clearer air, the pleasure of Westminster streets free of traffic, as many members of the public commented on during the Rebellion, or the brief but welcome respite from the persistent background worry that has become known as climate anxiety?

And those are just the local, direct benefits. The increased urgency and accelerated timetable for action on climate change by world leaders such as the UK is critical to preventing the worst consequences of climate change. These protests have finally begun to spur that urgency. How many deaths and displacements, how much suffering, may have been avoided as a result? We can never know for sure, but we know that we are talking about incomprehensibly large numbers of lives, of entire species and ecosystems, saved as a result of acting now rather than later.

Sir/Madam, I believe, and I would invite you to entertain, that while I have broken the law, I did so out of necessity and in good conscience, and that while I regret the necessity of my actions, their impact has been and will continue to be overwhelmingly more positive than negative.