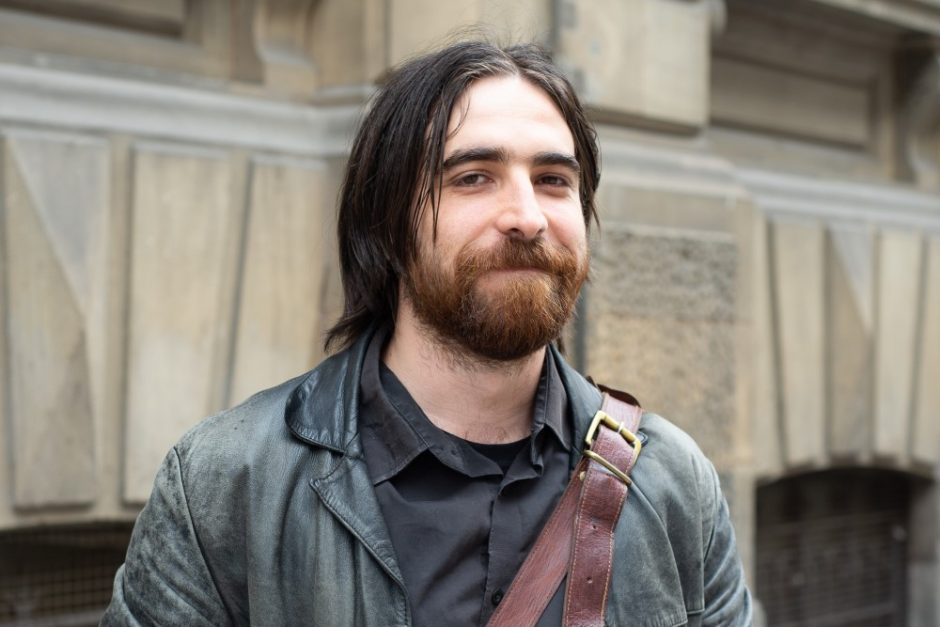 David was arrested on 24th April 2019 at Marble Arch during the 2019 April Rebellion. He pleaded guilty on 27th September 2019 at City of London Magistrates’ Court and was given a six month conditional discharge and £70 court costs.

“I see Extinction Rebellion as just one part of a much wider social effort, seeking to raise awareness of the immediate perils that we all face, and to challenge the global power structures that perpetuate the systemic exploitation of both people and resources. I hope that all forms of activism towards climate justice and social justice lead to a greater collective awareness and a greater shared responsibility, both to each other and to the planet. There is no climate justice without social justice.”

“I’m sure many have stood here and spoken at length about the climate crisis and the immediate peril we’re all faced with. I do not need to repeat what others have said other than to agree with them and to state that my actions, while unlawful, were made in the best interests of the community to the end of raising awareness of both the climate crisis and the institutional resistance to resolving it.

So instead I’d like to talk about my experiences in police custody and how my faith in both the legitimacy of the Metropolitan police force and the justice system have both withered as a result.

Before I was arrested, I witnessed a number of incidents that shocked me. I stayed up all night at Parliament Square to keep watch on our friends in the trees. Whilst there I witnessed police trying to yank a man out of a tree by a rope which was attached to him, with him screaming and clinging to the branches for dear life – and had they succeeded, would have unquestionably killed him. I saw police shove a good friend of mine into a metal wire fence, from which he cut open his leg and was bleeding. I witnessed police refuse to give their badge numbers when asked, in fact shouting at us and becoming very defensive for even asking. I also witnessed police acting incredibly aggressive, defensive, and hypermasculine, trying to intimidate me and my friends, shouting at us, for no reason, trying to justify their unprofessional behaviour.

All of this was logged by legal observers, and a formal complaint was of course made, but I have no doubt that no action whatsoever has been taken as a result. I have seen many other incidents of a similar scale – I’ve heard of police lying to protesters, pretending to be medics to open blockades, I’ve seen police make random immigration checks as another wonderful example of the institutional racism of the police force, which is, of course, well documented and generally understood to be real. The Met Police website claims to be “keeping London safe for everyone”. I wonder how any of this counts.

When I was arrested, I was treated very poorly. I realise the police are not required to show kindness but they must have known that my crime was not violent, and they must have known that I wanted only to improve the world we all live in. But I was locked in a solitary cell, with only a foam sheet for warmth and no toilet paper, under the harsh light of what felt like a morgue. Every 20 minutes or so, some grunting, orkish man would slide open the little window, grunt at me, and slam it shut again.

Whenever I asked for the time or any kind of assistance, I was spoken to with nothing but disgust and disrespect. It was humiliating. I was not allowed to keep my asthma inhaler on me, and given the state of panic I was in, I of course found myself having several fairly serious asthma attacks. I was not shown kindness by the police, in fact it took them what felt like an hour to get my inhaler while I was struggling to breathe. As a matter of fact, the only person in the entire building who was genuinely kind to me was the doctor, who I inevitably needed to see. And this would make sense, because doctors spend their entire careers trying to heal people, while the police on the other hand, are better trained to hurt.

I remember, when I was finally let out, after 11 hours of solitary confinement, at roughly 1 in the morning, I remember being immediately approached by a pair of Extinction Rebellion arrestee support team, who had been waiting for me with a thermos full of hot tea and a packet of biscuits, who gave me a big hug, sat me down and asked me to talk about what I’d been through.

At that moment it was clear to me, as clear as it would be to anyone here, precisely who was on my side and who wasn’t, who was really “keeping London safe for everyone”. The police are supposed to be a force for good, acting in the best interests of everyone, without political bias, but they have shown themselves to be violent, insincere, disrespectful and callous. The only people in this entire scenario that I believe to have been genuinely acting in good faith is Extinction Rebellion.

So I plead guilty because I accept that, according to the rule of law, I have broken that rule of law, and I’m sorry to have done so. But me acknowledging my own guilt does not suggest that the Crown Prosecution Service or the Metropolitan Police Force are in any way innocent. I have witnessed corruption, physical violence, illegal use of force. But above all, the sheer cynicism of this overly harsh and inhumane response to entirely peaceful, nonviolent direct action, has been shocking.