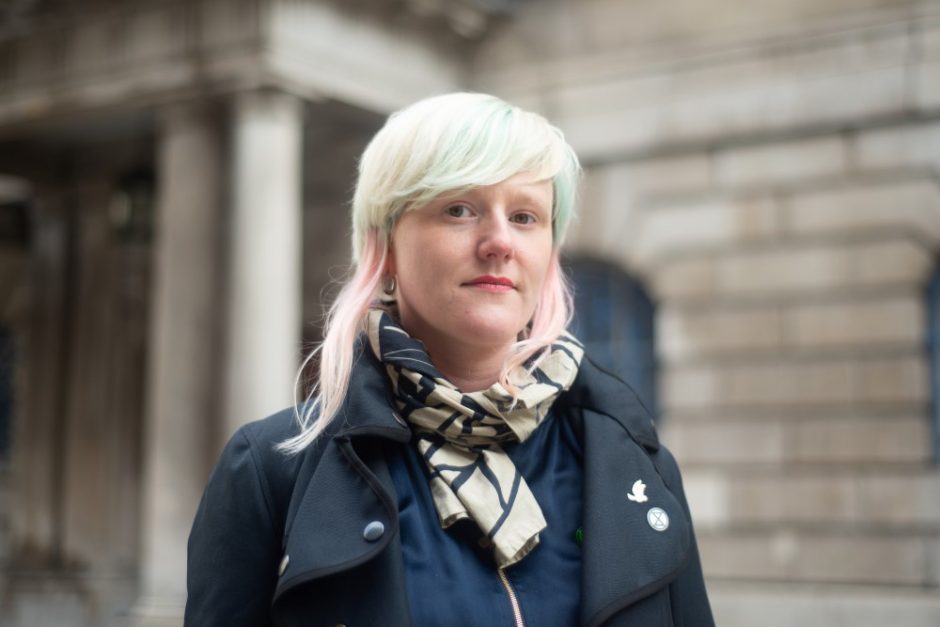 Clare was first arrested for civil disobedience in 2017, as part of a campaign against air pollution in London, a project that helped to inform the ideas behind Extinction Rebellion. She was arrested again on 10th October 2019 while blocking the private jet passengers’ entrance at the London City Airport action during the 2019 October Rebellion. She was charged with Obstruction of the Highway and tried at City of London Magistrates’ Court on 16th January 2021. She was found guilty and given a six month conditional discharge and £231 court costs.

“Realising that there is nobody coming to save us, and the horrendous mess that we are in, the only meaningful purpose for my life seems to be in creatively resisting this corporate-state planned mass murder. We cannot deny we have responsibilities as ancestors and I am exploring my own power to be in a different relationship with these tragic times, our society, culture and politics. Rising feminine power is seeking to redress the man-made mess, and I am honored to be part of that collective expression of love.”

“Nature sets the ultimate rules and we are guilty of breaking them.”

“I took this action thinking of my nephews and my godchildren, who are very young and set to inherit a planet that does not look like the one I was born into, which was bounteous and beautiful. The UN has confirmed that this pandemic has been made more likely by our damage to the living world. If this court believes the wheels of justice must continue through the pandemic, despite the risk, so too must the wheels of real democracy continue. This includes protesting dangerous, unjust and in some cases, illegal policies.

We anticipate even more serious disruption to food systems due to extreme weather and unpredictable growing seasons as our weather patterns are disrupted. This will mean food price spikes and the possible breakdown of our food supplies which would result in untold suffering for those who are least responsible for the crisis, the global poor. On our present course we face civilisational collapse and suffering beyond our imagination. Billions of deaths, billions displaced, billions starving to death. Many parts of the world will become uninhabitable. Coastal cities will be damaged or lost. Conflict over scarce natural resources.

The super rich should not endanger my nephews, or our global human family through climate destruction. We must be more conservative with use of resources, so everyone has their needs met, we have equity-based responsibilities which all international agreements were founded upon.

The suggestion from the prosecution that we should basically give up because this goes against the grain of big business is an argument that I cannot comprehend. We have several pilots in Extinction Rebellion who have quit their very well-paid careers because they realise that protecting life on earth is a far more important purpose for their life.

At this stage a legal representative would probably ask me, “why didn’t you do something else?”. Well this is a short list of some of the things I have tried:

I do not believe the UK public have been made sufficiently aware of the levels of disruption we can expect to see both locally and globally in the rest of this century and beyond. I do not believe that the majority of the British public are aware that our Ministry of Defence (MOD), along with other government departments are preparing for 3-4 degrees of average global warming and anticipate social breakdown and systemic collapse.

We cannot allow the crisis of inequality and the superrich to abuse us by destroying nature, we must support a non-violent transformation. With bold mitigation and deep adaptation.

Even if you are a judge, a police officer, a lawyer or a magistrate, you can choose not to support the ultrarich destroying the future. You can choose to accept that peaceful people like us have an important point to make and wish to protect our friends, families and loved ones, including our families around the world.

Nature sets the ultimate rules and we are guilty of breaking them. As a woman I know every month that I am part of nature and that there are rules and cycles. If peacefully breaking man-made rules is necessary to love and obey nature then I believe that is what we must do.”