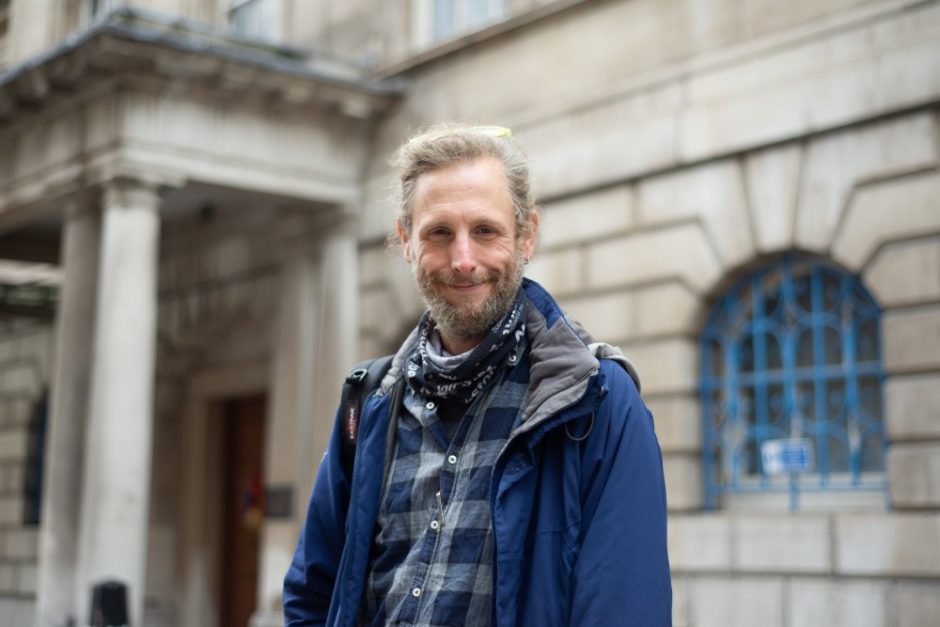 Árainn has been arrested seven times since 2019 for XR actions having never been arrested before. In February he became the third XR defendant to disobey in the dock with a contempt of court action for which he served 5 days in Wandsworth Prison.

His first arrest was for aggravated trespass in January 2019 during a lockon at a Barclays branch in Yeovil to highlight Barclays’ massive, continued investment in fossil fuel extraction. He was not charged. He was arrested for the second time, on 1st April 2019 for the semi-naked action in Parliament, “Elephant in the Room”, designed to highlight the utter foolishness of the government’s position on the climate and ecological emergency. He was arrested on suspicion of outraging public decency but not charged.

He was arrested again on 3rd October 2019, before the start of the 2019 October Rebellion, for the fire engine action on the Treasury, in protest at the British government being the biggest subsidiser of fossil fuel extraction in the EU. He was charged for criminal damage and has a plea hearing on 29th April 2021, with the expectation it will be moved to the Crown Court for a jury trial.

His fourth arrest was for Obstruction of the Highway near Lambeth Bridge during the 2020 October Rebellion. He was tried in January 2020, found guilty and given a nine month conditional discharge and £120 court costs. On 10th October 2019, he was arrested again at London City Airport during an action against airport expansion and the unequal effects of airline emissions on the poorer sections of society. He was charged with not leaving an airport when asked to by an officer of the law, tried in March 2021, found guilty and given a 12 month conditional discharge and £700 court costs.

Árainn’s sixth arrest was on 18th October 2019 for Obstruction of the Highway at Oxford Circus during the 2019 October Rebellion, for which he was tried and convicted on 4th February 2021 at City of London Magistrates’ Court and received a 12 month conditional discharge and £600 court costs. During this trial, he glued on and livestreamed from the court-room. The judge sentenced him to seven days in Wandsworth Prison for contempt of court, of which he served five days.

On 3rd September 2020, he was arrested for a seventh time, outside the Peers’ Gate of the Houses of Parliament during the 2020 September Rebellion. He was tried in February 2021. The judge found there was no case to answer due to errors in the arresting procedure.

“I have been an environmental education specialist for 20 years, trying to connect children with their local wildlife sanctuaries so they would learn to love and protect them. When I heard Gail Bradbrook talking for the first time about the CEE, the full realization hit me that we no longer had the luxury to leave it to the next generations and, in order to have any chance of seeing the type of systemic change needed, those that can, have no real option other than to peaceably put our liberty and livelihoods on the line.”

“If you are reading this then it is because I have been sent to one of Her Majesty’s prisons here in London for contempt of court because I have, as an XR defendant, extended the campaign of peaceful civil disobedience into the courtroom.

I have chosen to take this action because, while spending the past two years as an active member of Extinction Rebellion, I’ve seen what I believe to be a wholesale and top to bottom failure of the judicial system to adequately respond to the climate and ecological emergency we face: From the Metropolitan Police’s decisions to put illegal barriers in the way of peaceful protest, to the CPS’s political decision to prosecute so many of us (especially in times of Covid) to the discounting and blocking of the defense of necessity and the higher courts decisions to facilitate the psychopathic Heathrow third runway and HS2 projects.

As a Forest School leader of 20 years experience, I am seeing the climate and ecological emergency affecting our environment with more and more extreme weather-related events and plant and tree diseases. But more than anything, I believe I owe it to the people suffering on the frontline, mostly in the southern hemisphere, to say that this system cannot stand anymore. I believe the change we need can only be brought about in time, if the people who can choose to, throw ourselves on the wheels of the machine as many times as we are able.

I am inspired by the ones who have gone before me and I hope to, in my own small way, inspire more people to join and extend the campaign.