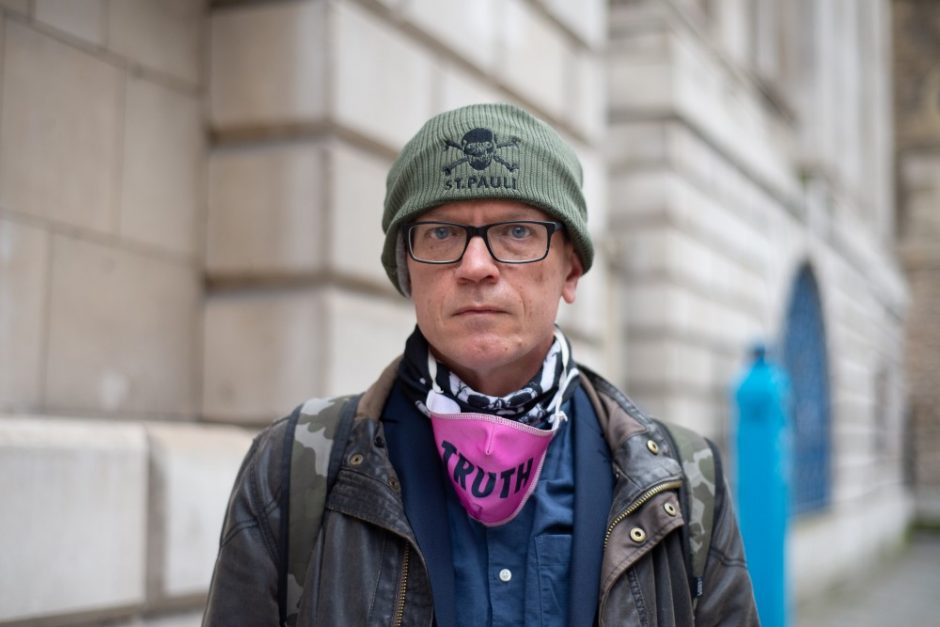 Steve, aka Woody, is also an artist and lives on a wooden boat on the Thames. He was arrested on Whitehall during the 2019 October Rebellion and charged with Obstruction of the Highway. He was tried on the 4th March 2021 at City of London Magistrates’ Court. His case was dismissed due to lack of evidence.

He was arrested again in October 2019 at the UKOG site in Horse Hill in Surrey for Obstruction of the Highway. The charge was dropped as not in the public interest. His third arrest was on 4th September 2020 at the Bank of England. He was charged with criminal damage and is due to be tried in June 2021.

“I was arrested locked in a steel pipe in front of the gates at the UK Oil & Gas (UKOG) oil well in Surrey, near Gatwick, in December 2019. The site is subject to a High Court injunction preventing disruptive protest.

After 14 months of preparation for trial, my case was thrown out as it “was not in the public interest”. It’s clear to me that any business requiring their own private laws against protest, in the form of injunctions, is an admission that they’re operating against the public interest.

Globally we already have more fossil fuel reserves than we can possibly burn to keep within the legally binding Paris 2015 COP21 agreement. Yet in March 2021, the UK Government granted new permissions for oil and gas exploration in the North Sea. And Surrey County Council, who themselves declared a Climate Emergency in July 2019, have granted UKOG permission for 25 years of drilling for oil at Horse Hill.

I’m looking out of the window as I write this. At snow. In Surrey. In mid April. The only surprising thing about this is that anyone should find it surprising. Extreme weather events are now a regular occurrence here in the UK. We had flooding here three months ago, but it’s no longer a news story. The true horror of the developing climate and ecological emergency is happening far away in the Global South, out of sight of most people. But do we wait for the sea levels to envelope our coastal towns and the inevitable societal collapse to reach our shores before we take action? By that point, it will be too late. It is already too late.

Why do I feel it is necessary to break the law in my protest actions? Our government is acting illegally. It is breaking its legally binding commitment to the Paris Agreement. It is failing to protect its citizens, all global citizens and all global species. Writing to my MP elicits the usual boilerplate greenwashing responses; the latest of which manages to contradict itself in just one sentence. Unlike millions of others, my life is comfortable. This gives me privilege. It is my moral duty, by any non-violent means necessary, to use this to shine the light on our government’s culpability in the deaths of human beings and species, both here in the UK and globally.

So for me, it’s not why I decide to take such actions, but instead why would I not? It’s a human instinct; self preservation. My actions are acts of self defence. For myself, my family, humankind and all species on this planet. I have twin boys. I’m not going to be the man on his death bed apologising to his sons for the state of the planet they live on by saying I signed a petition to ban plastic straws.”