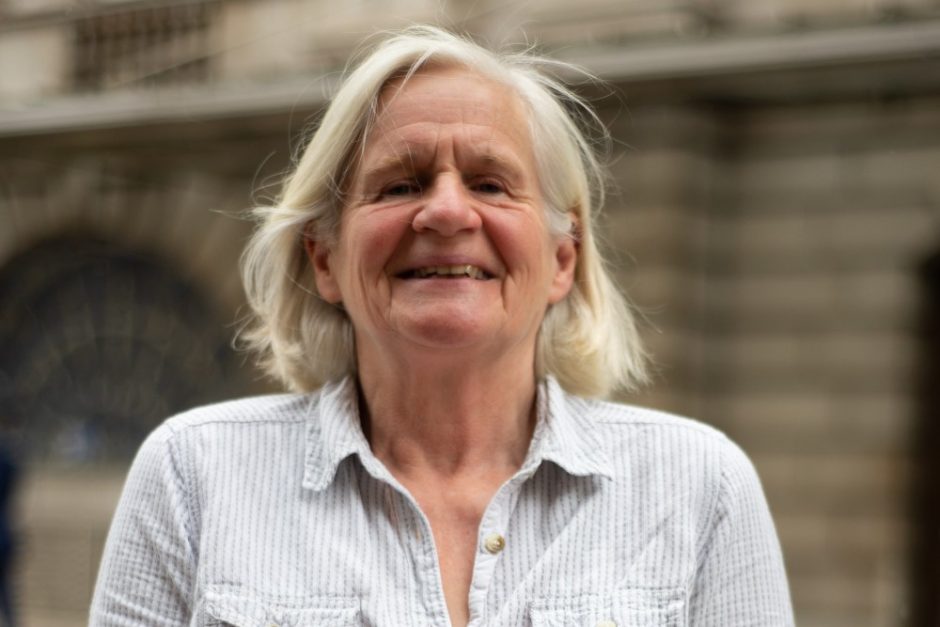 Philippa Tomlinson, 63, consultant ecologist from the Isle of Man

Philippa was arrested on 15th April 2019 when lying in the road on Parliament Square during the 2019 April Rebellion. She was charged under Section 14 of the Public Order Act, pleaded guilty on 4th October 2019 at City of London Magistrates’ Court and received a six month conditional discharge and £105 court costs.

“I used to think that science would sort out the ecological emergency… someone else would ‘put things right’. I also thought that the work of the Wildlife Trusts, RSPB, Greenpeace, Friends of the Earth and all the other organisations who work so hard at wildlife conservation were making a difference. Of course they do at the local level, a huge difference. But the catastrophe that we face is a global one and that is why my personal focus had to be the international rebellion in London.

I am a quiet and shy person with an academic background and a PhD. I did a degree in Ecology in the 70s and embarked on a career in environmental archaeology. I learnt, and then later taught, about the evolution of the natural landscape and the impact of human activity over the past 10,000 years. I am also a botanist and enjoy studying plants in wild, unspoilt places.

I had a career change about 15 years ago because I wanted to do more in the area of conservation and ecology and I am now a biological records manager. I look after a huge database of wild plant and animal records in the Isle of Man. I felt this work was important. I was using my skills to understand populations of species and provide data for planning, and conservation work on the island.

But I became increasingly depressed. I gradually became disillusioned. How could the job I’m doing help to stop biodiversity loss and species extinctions? What was the point when whatever I did could not possibly stop the loss of natural habitats and the extinction of species? I kept thinking we should somehow change the system, everywhere I looked I was seeing destruction, but I felt powerless to actually do anything about it. In counselling for my depression I admitted that it was my worry about the environment that was affecting me.

At about the same time I started reading about Extinction Rebellion. It made sense to me. It was asking me to act, to get out there and do something. I realised it provided a route to maybe make a difference.

Joining the XR movement was in fact very therapeutic because once you confront the facts about the climate and ecological emergency there is a lot of emotion and working through that emotion and finding the strength and courage to get out there and do something is very powerful. Taking part in the rebellion in London in April 2019 was a life-changing experience for me.

What is this emotion? To be honest it is mainly grief but also guilt. We are all responsible for what is happening to the planet. We in the global north are the consumers who are the drivers of this catastrophe. At the same time we are entrenched an economic system which is causing destruction around the world. We can only see this if we take the trouble not only to read about what is happening around the world but to piece all these scientific and news reports together and face the conclusions of rapid global temperature rises, ocean warming and acidification, species extinctions and crashes in numbers of key species, drought and sea level rise. These are happening now and will affect all of us dramatically in the next decades. Put all these things together along with the unknown effects of environmental tipping points and we have reason to be terrified.

Recently I have been thinking a lot about how we can explain to people how wild plants and animals are disappearing from our countryside. Even those of us who spend time in wild places and can see the destruction happening around us cannot easily come up with concrete examples of species going extinct or the reduction in numbers of key species.

We may see a well-loved plant growing in a hedgerow decimated by a verge cutting machine or notice a field that was a hay meadow ploughed and re-seeded. But how can we document these changes in the landscape statistically? Sceptics or people with other agendas will argue that these are just a one-off, or they will grow back next year or this needs doing to feed us. The other issue is that these types of losses are small, very gradual and incremental but mostly we do not notice them happening and from one generation to the next the memory of a particular rich meadow or a special plant in a hedgerow gets lost. But the cumulative effect of course, especially on the global scale is enormous.”

“The photo you have of me I am holding some of the acorns that I took to court on 4th October. The day before the hearing, I had collected a bagful of fresh acorns from a roadside in Norfolk. I handed them out to everyone who was in court, their supporters, the court officials and the solicitor. After the proceedings I also gave a handful to the judge, explaining they were symbolic and he could grow them or give them to his children to grow. They were left on the desk in front but later I was given a verbal ‘thank you’ message via the court usher.”