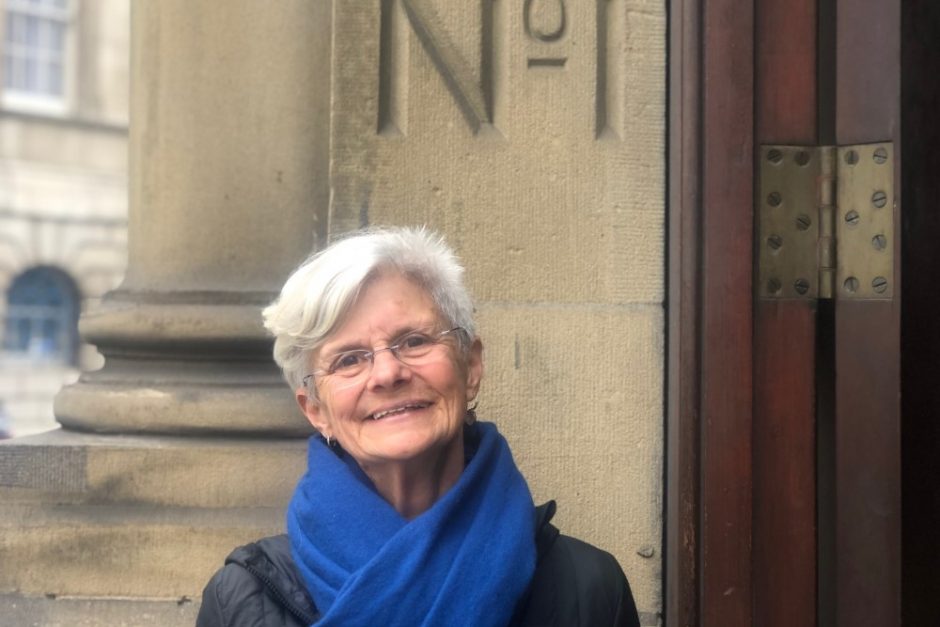 Anne, who has three daughters and three grandchildren and is also a Red Rebel, was arrested under Section 14 of the Public Order Act during the 2019 April Rebellion. She pleaded guilty at City of London Magistrates’ Court in October 2019 and received a six month conditional discharge and £105 court costs. She was charged again after being arrested in Downing Street during the 2019 October Rebellion. The charges were dropped.

She was arrested again on 3rd September 2020 while glued on outside Parliament during the 2020 September Rebellion and charged under Section 14 of the Public Order Act. She pleaded guilty on 5th March 2021 at City of London Magistrates’ Court and received a nine month conditional discharge and £107 court costs. She was also arrested on 9th October 2020 while locked onto an XR beacon at the entrance to the work site for HS2 at Denham. She was charged under Section 241 of the Trade Union and Labour Relations Act 1992 and pleaded not guilty on 4th December 2020 at St Alban’s Magistrates Court. Her trial is due to take place on 1st September 2021 at St Alban’s Magistrates’ Court.

“How I came to join XR: My sister, who has always been quite an activist, sent me an email in the autumn 2018, she thought I might be interested. I had a look. It seemed perhaps a little extreme, but I read on and then I watched the video of Gail Bradbrook’s talk (Heading for Extinction and what to do about it, September 2018) which was at the end of the email. I was stunned. I hadn’t realised the climate situation was as dire as that. But clearly it was an emergency. So I joined straight away. How could I not? Once I knew how desperate the situation was, I couldn’t just sit back and do nothing. I had to act.

The government chooses not to act, despite the scientific evidence of a climate and ecological emergency. In fact, the British Government is breaking the European Convention on Human Rights, Article 2: the Right to Life. Given this irresponsible attitude, I chose to exercise my right to Freedom of Conscience (ECHR Article 9) and act. I acted to save life. But I was arrested for this.

I have never done anything like this before. I’ve certainly never been arrested. But then I listened to one of Gail Bradbrook’s speeches in October last year (Heading for Extinction and What to Do About It, September 2018). I hadn’t realised that the climate situation was as dire as it is. I hadn’t realised it was such an emergency. But once I knew, I couldn’t just sit back and do nothing. I had to act. In the face of all the really terrible and frightening facts about the future of humanity and the future of our planet – how could I not act? So I had to join Extinction Rebellion.

David Attenborough agreed that “the facts are incontrovertible”, that “the UK must take radical action”, even “that we cannot be radical enough”. He added that “the government must inform and educate” (New Scientist 9 July 2019).

We face a climate emergency of unimaginable proportion. But most people don’t know the facts. Our April rebellion brought many of these facts to a much larger audience. Yes, we disrupted people’s lives. But in the face of climate catastrophe that is exactly the message – it can no longer be business as usual. We are facing a climate emergency. And our lives will eventually be disrupted much, much more so than they were in April,

Rupert Read of Extinction Rebellion says in his pamphlet “Truth and its Consequences” (July 2019): “We are in rebellion against a government that cannot be conceived as legitimate because how can a Government possibly be legitimate that is committing its citizens to an unprecedented mass murder-suicide?” The government has failed in its duty. So the only way forwards is to rebel non-violently, to do all we can to get those in power to tell the truth and act on it.

When I and over a thousand others sat peacefully on the London streets in April, we were doing the only thing we could do to effect change. We were rebelling, by disrupting business as usual and drawing attention to the climate emergency. So we were arrested. But we were committing no crime. We were doing our duty. We were telling the truth. We were telling the appalling, uncomfortable, difficult truth that the government will not address. We will all have no future if we don’t act now. The threat is existential. It is that serious. It is that huge.

I know that pleading “necessity” does not normally win a trial in court. But these are not normal times. I acted out of extreme necessity. I had no option.

I should not have to be pleading guilty for trying to protect life.”

“Up until a couple of years ago people like me didn’t generally get arrested. Since the XR Rebellion in April 2019 I have been arrested four times. Why on earth would a 72 year old grandmother choose to do this ?

Sir David Attenborough recently said, “Climate change is the biggest threat to security that modern humans have ever faced.”. I had two grandchildren when I was arrested for the first time in 2019. I now have three. And I am terrified for their future.

Parliament declared a climate and ecological emergency in May 2019, soon after the XR April Rebellion. But since then, they have done nothing about it. I, along with so many others was utterly fed up, frustrated and discouraged with the government’s failure to act.

But in September 2020 there was one small glimmer of hope, two actually, but linked – the CEE Bill and the XR Rebellion.

The Climate and Ecological Emergency Bill (CEE Bill) is calling on the government to take real action to protect and restore the UK’s biodiversity and slash carbon emissions, with an emergency Citizens’ Assembly set up to guide government action. This bill, tabled by Caroline Lucas on 2nd September 2020, is the only concrete plan available to address the crisis. On 1st September, Extinction Rebellion launched their rebellion to demand that our elected officials Act Now and embrace this legislation.

I was part of that rebellion. I was arrested on 3rd September for glueing my hand to the pavement outside Parliament gates. A peaceful, non-violent action to draw the attention of Parliament to the urgency of the situation. An attempt to get the Government to take seriously the climate and ecological emergency that they declared in May 2019 but which they still have not acted on.

I don’t enjoy being arrested – it’s exhausting and emotionally draining. But we’ve tried everything else. And it’s an emergency – we simply have to act now. Non violent direct action is the only way to draw attention to the appalling, uncomfortable, difficult truth that the government will not address. We will all have no future if we don’t act now. The threat is existential. It is that serious. It is that huge.

As the scientists, and most recently Sir David Attenborough tell us, climate collapse could destroy entire cities and societies, even altering the stability of the entire world.

Christian Aid’s climate policy lead, Dr Kat Kramer, said recently, (24th February 2021): “Millions of the world’s poorest people are already living with the impacts of climate change, which is forcing displacement, devastating livelihoods and putting pressure on communities who are competing over resources such as land and water.”.

Sir David goes on, “If we continue on our current path we will face the collapse of everything that gives us our security.”.

We should have known just how desperate the situation was 30 or 40 years ago. The government knew. But we were not told. And no action was taken. And even now, when the situation is dire and time is running out, the gulf between what the government says and what it actually does is gapingly and distressingly huge.

There should have been a second reading of the CEE Bill on 26 March 2021, but, although all parties are represented by the slowly growing number of MPs supporting it, there are very few Conservative MPs. And the reading has been put off.

It’s an emergency, for goodness sake! Shame on our leaders for not standing up for our young people, for their future, for our planet.

Barak Obama said, “We are the first generation to feel the effects of climate change, and we are the last generation that can do something about it.”.

We simply have to act now. We’re seeing the effects of climate change every day. The freezing temperatures causing chaos in Texas, the terrible Australian and American fires, the melting ice caps and glaciers tumbling into the sea, the enormous new iceberg that has broken off Antarctica, the storms and hurricanes and typhoons causing devastation with increasing regularity all around the world. And it will only get worse. Much, much worse.

The climate and ecological emergency moves relentlessly forwards, while the government dawdles, diverted by the coronavirus, refusing to admit that the pandemic we are living through now is nothing compared to what will come as the climate crisis further develops and intensifies. As Bill Gates has said (16th February 2021), ending the global Covid pandemic will be “very, very easy” compared to the task of addressing the climate crisis. Managing to do this, he said, would be “the most amazing thing humanity has ever done”. But our government does nothing.

So yes, I acted. And so I am, apparently, an “uncooperative crusty” (Boris Johnson, September 2020). But why on earth would I cooperate with a Government that is failing to do its job and protect its citizens?

As a concerned and pretty desperate citizen I chose to rebel for my grandchildren, my children, and all the young people whose futures are so very bleak.

The Huffington Post stated on 22 February that Sir David Attenborough is to warn world leaders that this year’s COP 26 climate change talks in Glasgow are the last chance to prevent “runaway” global warming. We don’t have long. The time for denial is over.

As Rupert Read says in his book Parents for a Future – “Think long term and act now”. As a parent and grandparent and in the light of the scientific facts and evidence, I acted. It was my right. Indeed my duty. I glued my hand to the pavement. And I was arrested.

But how can what I did, in my desperation, be considered a crime? What an extraordinary system that deems the protection of life to be a crime?”