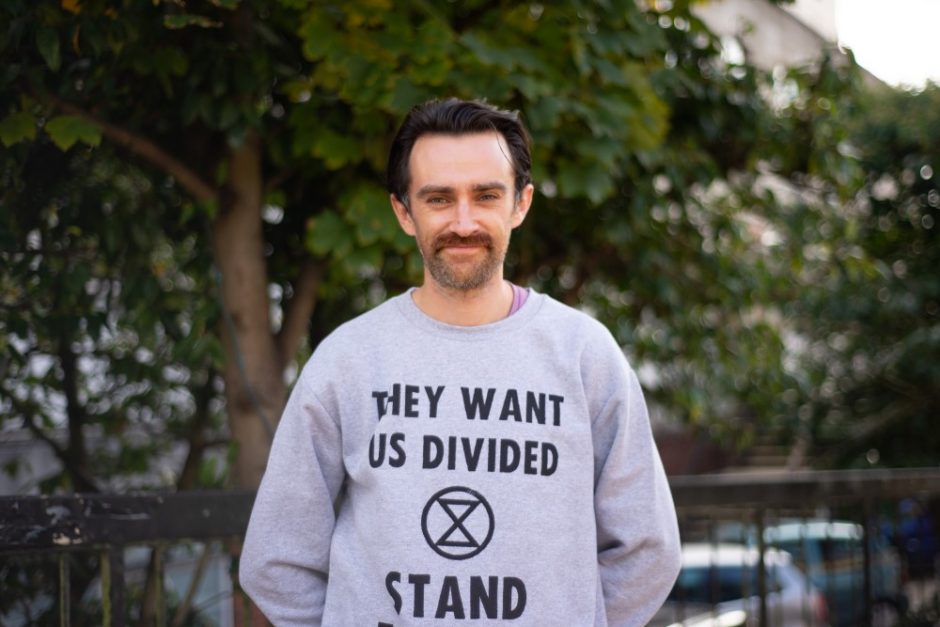 Tim, who is originally from Cornwall, was arrested for the first time was on Waterloo Bridge on 15th April 2019, the first evening of the 2019 April Rebellion. He was arrested again two days later at Parliament Square. He was charged with two counts of Obstruction of the Highway and breaching Section 14 of the Public Order Act. He pleaded not guilty on the grounds of necessity, was tried at Westminster Magistrates’ Court, found guilty and fined £420.

Tim was arrested again on 5th September 2020 for the Murdoch-owned printworks blockade during the 2020 September Rebellion. He pleaded not guilty on 5th October 2020 at St Albans Magistates’ Court. His trial is due to take place in September 2021.

“The science is crystal clear, if certain countries don’t make huge scale changes to their living habts, then all life on Earth is in danger. The planet will simply become too hot to sustain the majority of life that is currently left on it. After attending an NVDA workshop held by the late and incredibly inspirational Iggy Fox, in early 2019, civil disobedience, as an act of protest, was presented to me for the first time.

Up until then, I thought the fastest way to make any changes was to shift the mindset of the general public and their consumer habits (if people stop giving those that are causing the most damage money, these problems will go away), whereas now my energy is focused on those making and enforcing the law. I refuse sit back while greed and ignorance takes life to extinction.”