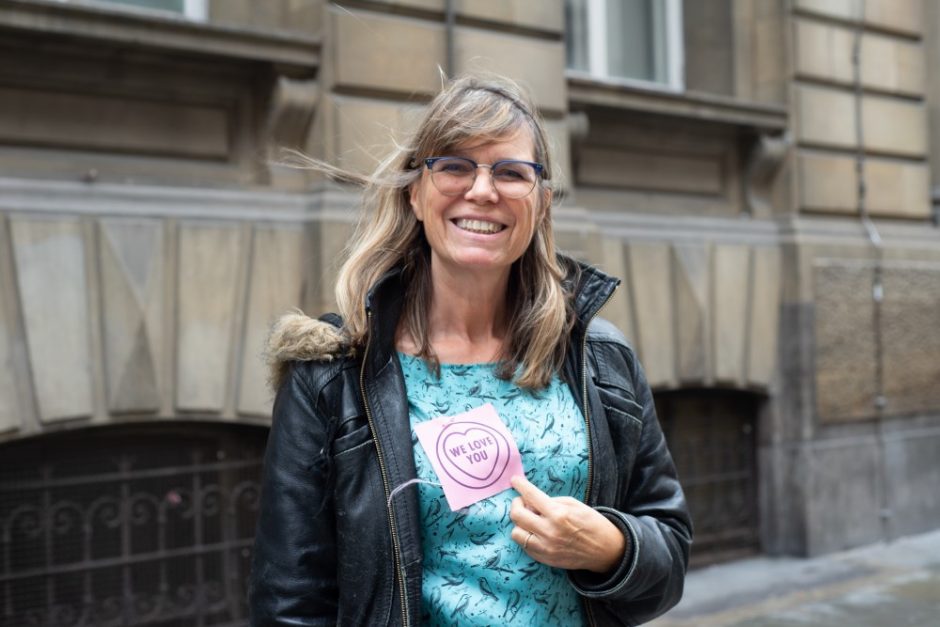 Sue was arrested on 17th April 2019 at Parliament Square while sitting in the street during the 2019 April Rebellion. She was charged under Section 14 of the Public Order Act and pleaded guilty on 11th October 2019 at City of London Magistrates’ Court. She received a six month conditional discharge and £105 court costs.

“I had just been to a religious ceremony at the end of the day with my family that was peacefully being held sitting on the grass in Parliament square. About 30 police marched purposefully by us like an army then came up to us and told us to move. We moved and then they told us to move again. They were very intimidating. My husband and daughter left as they were scared and I stayed. My husband is Black and I wouldn’t want him to stay because of racism in the police force. I could see XR rebels were sitting in the road at Westminster outside the Houses of Parliament, and because of a combination of wanting to take a personal stand about my fear of the climate crisis and being so upset by what I’d seen of the police behaviour with us at the ceremony, I decided this was my moment to go and join the Rebels and be arrested if necessary.

I saw some friends of my daughter’s and told them, as it was getting late and the police were obviously increasing the arrests, they should go home now as their parents wouldn’t want them in this situation. Within a few minutes of sitting on the floor in Parliament Square with a small crowd of others (many of whom were elderly and had come from around the UK), I was arrested. It was as if they spotted me from afar despite me being dressed normally and doing nothing except sitting down and they just made a beeline for me. It was strange. I walked with them to the van and was treated well at the police station, although I do remember that the young policeman when he gave his summary of my arrest to the woman on the desk said something like: “This woman was stopping emergency vehicles from passing through and was a danger to people’s lives,” which of course was not true as I know XR had been very careful to say that ambulances would never be prevented access.”

“Since 1992 and the Rio Earth Summit, I have understood the nature and urgency of the climate emergency and dedicated my professional and personal life to campaigning on it, writing about it, making changes in my own life to minimise my carbon footprint and sharing those learnings. For 27 years I’ve asked those in power to implement the changes necessary before it is too late through every means possible.

I failed. It is not until I found out about Extinction Rebellion a mere six months ago that I felt my involvement in climate campaigning could perhaps help us prompt the actual action by those in power that will save humanity (including my beautiful children and yours) and all other living things on this earth we love so much.

During the April Rebellion, I used my media skills to help provide the truth to journalists about the reasons for the Rebellion and people’s involvement in it. I was arrested after joining friends in a Jewish Passover celebration on Parliament Green. They felt greatly intimidated by the police presence and the questioning of them during the ceremony which included the arrest of one of their group. At the end of the ceremony I felt I had no choice but to support the protestors at the road blockade, and just sit quietly on the road. At that point I joined the XR Buddhists, as I am part of the XR Buddhist group and some young 15-year old XR youth from where I live. I was arrested a few minutes after sitting down.

During this Autumn Rebellion this week, I’ve been volunteering as a radio journalist for Rebel Radio. I meet and interview amazing, brave, imaginative and incredible people every day. In the last five days I have met so many people from all walks of life, all with the same passion – to prompt action on the climate and ecological emergency through being involved in non-violent civil disobedience.

I want to tell the court, Your Honour, about the lawyers I met on Wednesday. Their perspective is very relevant to what’s happening here now, today. It moved me, and I hope it will move you. On Wed 9 Oct, they launched their Lawyers’ Declaration of Rebellion outside the Royal Courts of Justice. The media, the public and many other lawyers were there to hear them.

Richard Lord, QC, opened the proceedings. He talked about how lawyers were seeking out the legal tools to use in these new unchartered waters of climate change, using old, new and international law to “fashion legal remedies appropriate to the time.” He cited a Latin legal quote which means: ‘One who keeps silent, appears to consent.’

Two lawyers including barrister Paul Powseland read out the Lawyers’ Declaration of Rebellion.

The statement starts: ‘We acknowledge the ongoing catastrophe of climate breakdown and ecological crisis. ….as lawyers, we declare a climate and ecological emergency and we name the failing of our profession and the legal system as a key contributor to this crisis.”