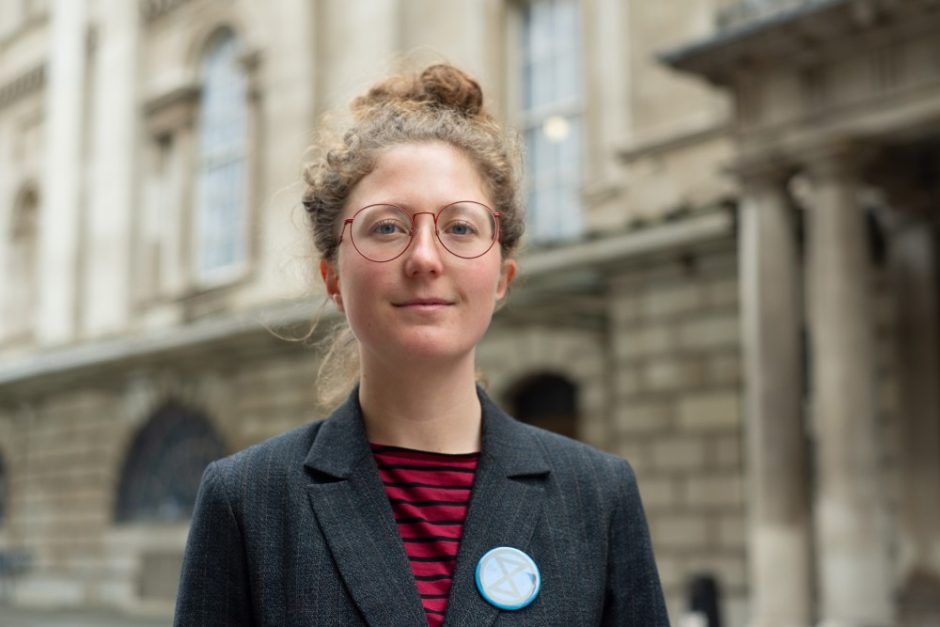 Indigo was first arrested for ‘breach of the peace’ at Cannes Lions Advertising Festival in 2019 for gate-crashing a Facebook conference. She was arrested again on 10th October 2019 at the London City Airport action while blocking the Private Members’ Entrance during the 2019 October Rebellion. She was charged with Obstruction of the Highway and tried on 13th January 2021 at City of London Magistrates’ Court, found guilty and received a £230 fine.

She was arrested again on 13th February 2020 after digging up the lawn in front of the Ministry for Housing Communities and Local Government calling on the Communities Secretary to call-in all proposed and expanding coal extraction planning decisions in the UK. She was charged with criminal damage over £5,000 and is due to be tried at Southwark Crown Court, in front of a jury, from 6th September 2021. She was arrested again at Parliament Square in September 2020 fduring the 2020 September Rebellion and charged with Obstruction of the Highway. She is due to appear in court in July 2021.

Most recently, she was arrested outside the Supreme Court on 16th December 2020 during a protest against the court’s decision to allow the building of a third runway and Heathrow. She intends to continue committing civil disobedience until the Government acts proportionately to the scale of the crisis.

“The only thing to do in a system that is driving itself to extinction is to rebel. If we look at the history books, we can see that the only way of creating the nonlinear change we need is for people to commit civil disobedience and force that change.

Currently too few people are taking the necessary action. I urge anyone reading this article to realise that they too can rebel. In order to prevent ecosystem and societal collapse, at this pivotal moment in history, ordinary people need to take extra-ordinary action.”