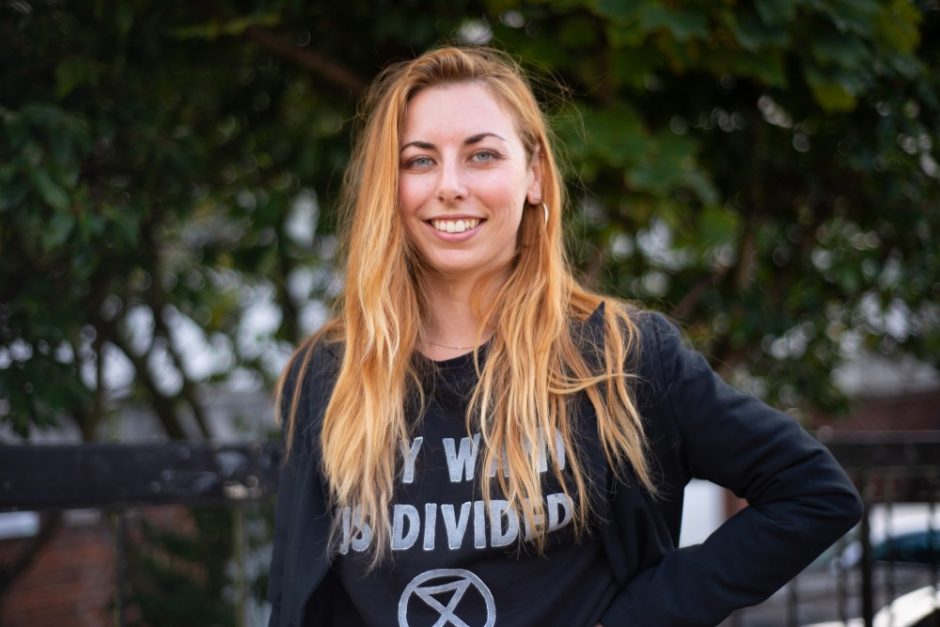 Gully was first arrested by the pink boat in Oxford Circus during the 2019 April Rebellion and charged with Obstruction of the Highway. She pleaded guilty at her trial on 26th November 2019 at City of London Magistrates’ Court and received a six month conditional discharge and £105 court costs. She was arrested again during the air pollution protest “The Air we Grieve” at Leicester Square in December 2019 during the General Election Rebellion and charged with criminal damage. Her trial is scheduled for June 2021 at City of London Magistrates’ Court.

She was arrested again on 5th September 2020 outside the Murdoch-owned printworks in Broxbourne during the “Free the Press” action during the 2020 September Rebellion and charged with Obstruction of the Highway. She pleaded not guilty on 5th October 2020 at St Albans Magistrates’ Court. Her trial is due to begin on 10th May 2021. In December 2020 she threw paint on the Supreme Court in a protest at the court’s ruling on the third runway at Heathrow and was arrested for criminal damage and released under investigation.

“Civil disobedience is a revolutionary tool with a rich history. It works, and it’s beyond necessary. I take no pleasure in being arrested, being put on trial, or being trashed by the billionaire press, but I am not ashamed. Because I know that nothing will ever change unless ordinary people are prepared to make sacrifices, and I know that our sacrifice here and now pales in comparison to that of activists in the global south, or that of the generations that will come after me.

I’m proud to stand up and be counted alongside so many other incredible people, and I’m proud to walk in the footsteps of our radical ancestors. We’re talking about the fate of all life on earth; what else is there to do? In the words of Frederick Douglass, “Those who profess to favour freedom, and yet depreciate agitation, are men who want crops without plowing up the ground. They want rain without thunder and lightning. They want the ocean without the awful roar of its many waters.””

“I never imagined the choices I made in my life would bring me here. But they have, and although I am scared, I am not ashamed.

I am 26 years old. My life so far has followed a fairly standard trajectory – I never intended to be a ‘criminal’, as I’m sure neither did the other 1,000 or so people that the MET arrested in April of this year, or the nearly 2,000 who were arrested last month. I can’t speak for them, but the knowledge that our world is dying has been with me my entire adult life, and over the years it has been increasingly impossible to ignore this reality and simply continue with the day to day, as so many others seem able and willing to do.

I started to make peace with several of my conclusions:

That I may well live to see this civilisation crumble, and the social fabric that holds us together, tear.

That in my lifetime there could be mass starvation, displacement and untold suffering.

That I will not bring children into this world.

I did not draw these conclusions lightly nor come to them quickly.

The world’s best scientists have been united in a chorus of dire warnings for the past three decades, and we have done nothing.

The IPCC report last year gave us a deadline of 12 years – a slim window of opportunity, which many believe to have been a conservative estimate. And still, we do nothing.

In the few weeks of late June and early July this year, Alaska and France saw record breaking heatwaves, Mexico suffered freak snowstorms, Washington DC was flooded and Chennai in India experienced a historic drought, leaving millions of people without water. And still, we do nothing.

In April I chose take my place alongside hundreds of other protesters and sit down in Oxford Circus. I chose an act of peaceful, civil disobedience, against a government that has been shown to be dangerously reckless in their abject failure to respond to the single biggest issue to have ever faced humanity. I chose to believe there was a better way, and that another future was possible.

I chose life. And I will continue to do so.

Because, if not now – when?