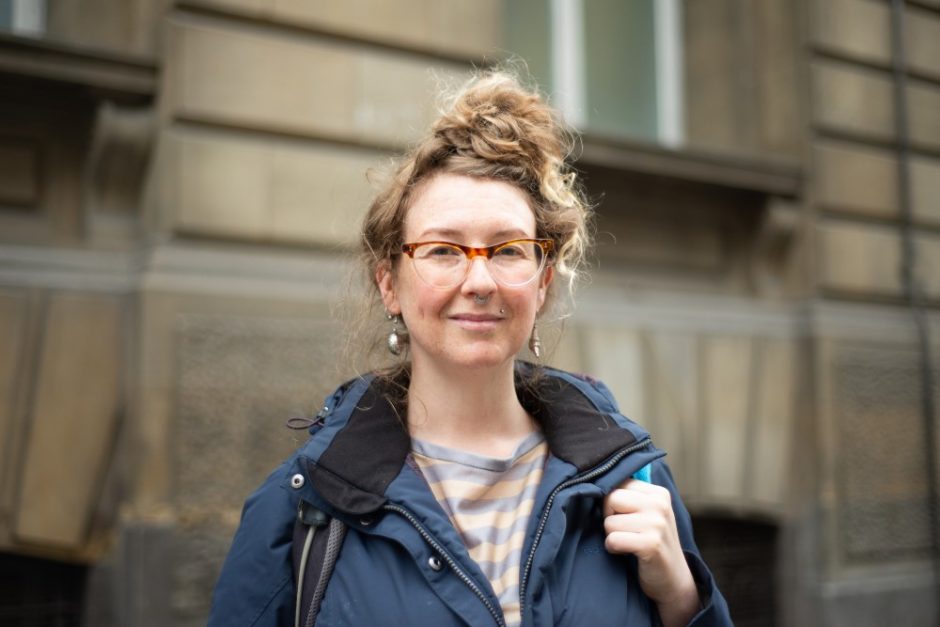 Scarlett was arrested on 20th April 2019 at Oxford Circus during the 2019 April Rebellion under Section 14 of the Public Order Act. She pleaded guilty on 11th October 2019 at City of London Magistrates’ Court and received a six month conditional discharge and £105 court costs.

Scarlett writing about XR in Doncopolitan

“When I was a kid and got a consciousness, it was there. We had The Body Shop save the whale socks with our bath pearls and Fern Gully and the World Wildlife Fund with the panda. When I was a bit older I watched Captain Planet with my little sister. At the same time, fake Legos, school dinners and one brilliant day, getting a dog. It was the early 1990s and sometimes my family went on package holidays on an aeroplane because we were lucky and sometimes my mum would agree to getting Sunny Delight from the new Asda. On a birthday there might be a party at McDonalds in Doncaster and a bit later at the diner where they danced on the tables at just built Meadowhall. Life was getting bigger and better.

Yet all the time it was there in the background. Things are dying far away. The animals are dying. The Earth is dying. But also pot noodles, falling outs, C&A dress for the school disco. And we were getting on with our life stuff because we were kids and the government etc were supposed to sort the other stuff out but we could see it wasn’t being sorted so there was the odd Save the Something fundraiser. You could take the dog out in the fields after school and there were insects and birds and you thought there always would be.

Well here we are now: 2019. The shadow was there my whole life and ages before. I’m nearly 35 and nothing got sorted. It is unthinkably more terrible. Most of us are switched off at least most of the time. I urge you to brace yourself and truly, deeply delve into the science beyond the headlines. It will shit you up. It will make you split your brain in two because now you know and you can’t un-know but you also can’t really comprehend what it means, those things you just read.

I think sometimes about all the turmoil/displacement/misery of Europe in the first half of the 20th century and what those people would have said if you had gone back in time before it started and said “it will be like this. It will be very bad”. And here we are now, our Earth war but it is way worse. What can we do? I always wanted to do something but what? Recycle, yes. Don’t fly. Vegan food. Local economies? YES! Great work, we need them! But the powerful Theys need to do differently. We need new structures and systems to get through this. Now we’ve had this IPCC report saying 12 years left to save ourselves – and all the scientists seem to reckon it is super optimistic anyway. And they aren’t saying 12 years carry on as you are, like there is still a bit of time for a cup of tea and a chocolate biscuit. They are saying totally change the way we do things now to even hope life will look anything like it has before. And still fracking and runway building is going off with political backing. Our saint Attenborough has got on telly a bit to tell us it is dire, but he’s even said he has reined it in, his message, scared to turn us off with the darkness. And it’s on the news but not the most important item. Connect the dots. The refugees are being displaced over resource and land rights due to climate collapse. That war there is because of this. That flood is because of this too. It won’t matter about Brexit so much when we have no water to drink. Young people are striking from school on Fridays because to paraphrase teen activist Greta Thunberg: what’s the point in going to school if you won’t have a world to grow up in?

In this mess Extinction Rebellion got started. We call it XR. It’s easier to say. XR is just a piece of the resistance but it feels significant and it is spreading around the world. Going on marches is not enough, we don’t have time. I joined my local one which is Nottingham. The strength of XR is in our networks and organisation and to be honest, our desperation. All of us are new to it. Many have “never done anything like this before”. Not political or activists. We are working things out as we go along and we all have to step up. Some of us are willing to get arrested. Some are not or cannot and that’s ok. There are three demands. 1)Tell the truth. Because it has never been on the news, not once how bad it really is. The government don’t tell us this is worse than anything we have known. Ask anyone with a science background. Ask google. That’s why we barricaded the BBC and targeted government departments. 2) Legally binding policies to achieve zero carbon emissions by 2025. THIS IS AN EMERGENCY. It is radical, it will be hard but what alternative have we got now? Think about it, what can be as bad as this is going to get. 3) Form a citizens’ assembly to mobilise this war effort because the government is not equipped. Our systems are not equipped.

In Nottingham our council has just pledged to go carbon neutral by 2028. It’s not perfect, it’s the same as zero carbon and it is not legally binding. It does though mean the council is aiming to be the first in the UK. It’s not enough but I can’t sleepwalk any more. Join us.”