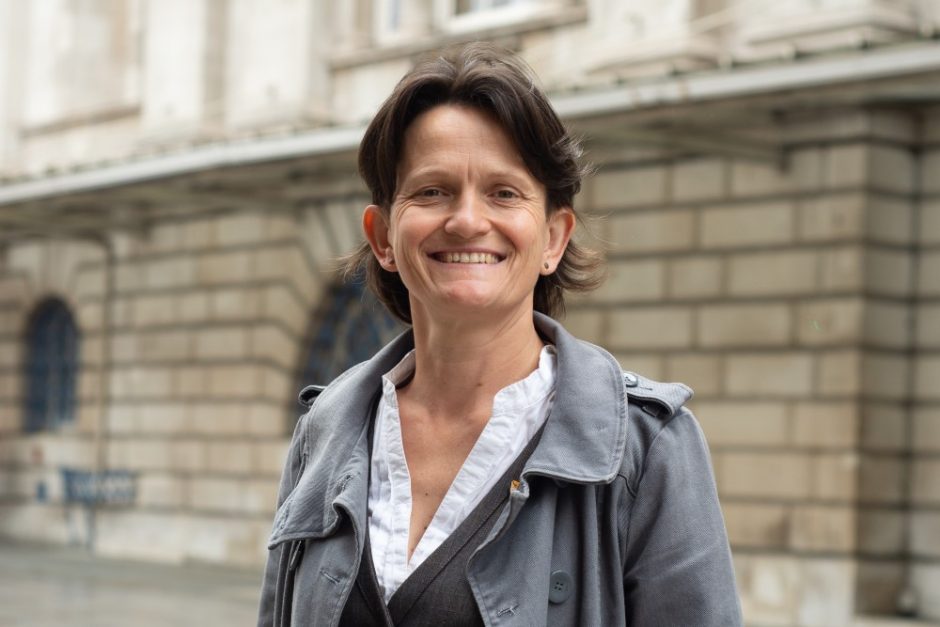 Debbie, who is also a shiatsu practitioner, was arrested on 17th April 2019 helping to hold Parliament Square during the 2019 April Rebellion. She was charged under Section 14 of the Public Act and Obstruction of the Highway. She pleaded guilty on 27th September 2019 at City of London Magistrates’ Court and was given a six month conditional discharge and £105 court costs.

“I became involved because once I was aware of the current situation that we are in I wanted to be able to do something about it. I heard that XR made the declaration Oct/Nov 2018 and I was impressed. I have two great nieces whom I fear for, and as an Auntie I want to be able to do everything within my power to make sure that they don’t have to face all that the Climate Emergency will bring. If I can make just one part of that better then that’s what I shall do.

A few years ago I read a book about how indigenous tribes would consider how life would be for the children seven generations ahead of them. They behaved in a way that ensured that the life ahead of them would be full and bountiful. They respected the Earth and understood that as humans, they had no desire to, and had no right to abuse nature, to burn out the Earth’s resources as we do now. They understood that to destroy nature would be to destroy themselves and their children as they knew that they were just a part of nature themselves. I cannot comprehend seven generations from now, will there even be seven generations? We are failing ourselves and our current generation.

Three years ago my nephew told me that he and his partner were going to have a child. I cried tears of joy because a new life is beautiful and magical. This was before I became aware of the current crisis. A few month ago my nephew told me that they were going to have another child, and this time I cried, I sobbed tears of despair. Tears of fear for that child’s existence. What world will that child face in 20 years time? 40 years time?

There are already children dying around the globe due to extreme weather patterns and Climate Chaos. Our kids will see society breakdown, food and water shortages, possible starvation. We will not be able to keep this generation safe and that scares the life out of me more than anything. In light of all of this, I feel that inaction is no longer an option and although I found my arrest terrifying, if by doing that it changes one small thing for them then I would do that over and over again and I stand by my decisions. I broke the law, though morally and ethically it was exactly the right thing to do. I can look those kids in the eye and say that I tried, over and over again and maybe I’ll be able to sleep at night.

My judge said to me and the others in the court that day: ‘I have listened and I have heard you, all of you. I understand, but I have to deal with you so I shall give you the minimum that I can – six months conditional discharge and £105 court fee.'”

Debbie’s story was featured in her local paper in September 2020. She was interviewed by Sky News 27th November 2018 following the action on the five London bridges.