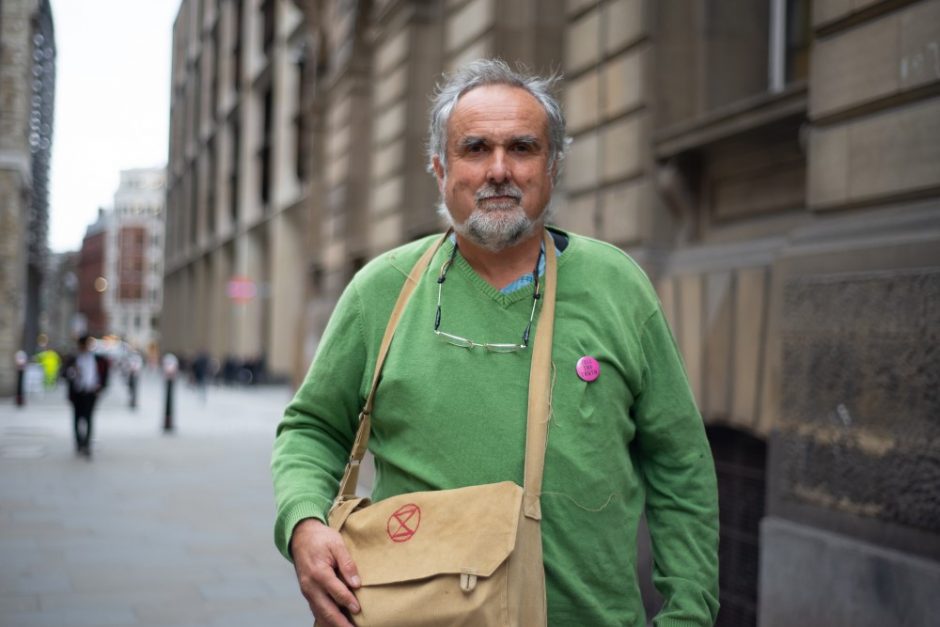 Richard was first arrested on 27th January 2019 for locking on to Barclays Bank during a Rebellion Day in Yeovil but was released under investigation and no charges were brought. He was arrested again on 19th April on Waterloo Bridge during the 2019 April Rebellion under Section 14 of the Public Order Act. He pleaded guilty on 11th October 2019 at City of London Magistrates’ Court and received a six month conditional discharge and £105 court costs.

“I acknowledge that I understood what the police officers required of me under Section 14 of the Public Order Act and that I refused to comply. I would also like to thank them for their courtesy, consideration and good humour throughout the process of removing this rather bulky object from Waterloo Bridge. However, I wish to make a statement of mitigation.

As an archaeologist who specialises in prehistory I am very aware of how different cultures and civilisations have developed, sustained themselves, then collapsed in crisis, sometimes due to external pressures, sometimes to mismanagement of resources. In Britain, the wildernesses such as Dartmoor are products of excessive tree clearance, cultivation and erosion well over 3000 years ago, during the Bronze Age. In the past migration and natural processes provided some mitigation. Now, the ever-worsening catastrophic impact of human actions is affecting the whole planet. It has already led to a rise in sea levels and to extreme weather events which have caused the loss of shelter and livelihoods, as well as death, to many thousands of people, chiefly in areas of the globe which have caused least harm. We, along with all major industrial nations, are profoundly implicated in this slaughter and we remain a major factor in ever-increasing migration and political and economic instability.

There are still some people who acknowledge the problem but talk of ‘technological’ solutions. However, they depend on a stable economy and society. Imagine the Roman empire sourcing its energy from nuclear power and then collapsing. There would have been no means to enable the extraction of natural resources nor to maintain the power stations, let alone the safe and secure disposal of highly toxic waste. The result would have been widespread contamination with the consequent loss of flora and fauna, including humans. All social systems have broken down and will break down. The difference during this sixth mass extinction is that ultimately there will be nowhere to run to. There will be ever more terrible conflicts as people struggle to survive. Living on a large island, with ample potentially productive land in what at present is a temperate zone, will not keep us safe, let alone our children and their descendants.

This is not a call to give up in despair but rather to make the changes which will enable us to mitigate the very worst impacts and to allow nature to recover as soon as possible. Following our action in April an opposition motion to declare a climate emergency was passed unopposed. It is the duty of a government to protect its people against harm and to enact laws appropriate to this objective but there has been a signal failure to translate the declaration into meaningful actions. The scientific evidence for the environmental crisis is overwhelming yet our government prefers to protect the short and medium-term interests of corporations and other big businesses at the expense of explaining to the people of our country the truth of the dire situation. At a time when we should be reducing our carbon footprint the government aims to increase remote trade while adding runways to airports and resuming road building which will increase the volume of traffic.

I have been a vegan for 45 years because of my desire to avoid harming other animals. Over the past 25 years I have become increasingly aware that human impact on the environment is causing far more devastation to both fauna and flora than the consumption of meat and dairy products in themselves so I have campaigned for the Green Party and stood unsuccessfully at local elections. I have also written to successive MPs about the environmental crisis. None of this has brought about the necessary changes. It is only since the instigation of the Youth Strikes and the non-violent direct action of Extinction Rebellion that Parliament and the population at large have started to take the issues seriously. In participating, I act in good faith towards my children; the officers who arrested me acted in good faith in response to an instruction. However, I ask the people at the highest levels in government, who caused that instruction to be issued and continue to avoid telling the truth about the crisis and acting on it, towards whom is your good faith directed?”

Somerset live reported on Yeovil Rebellion Day: Richard is being bundled into the van in the first photo although wholly obscured by police.