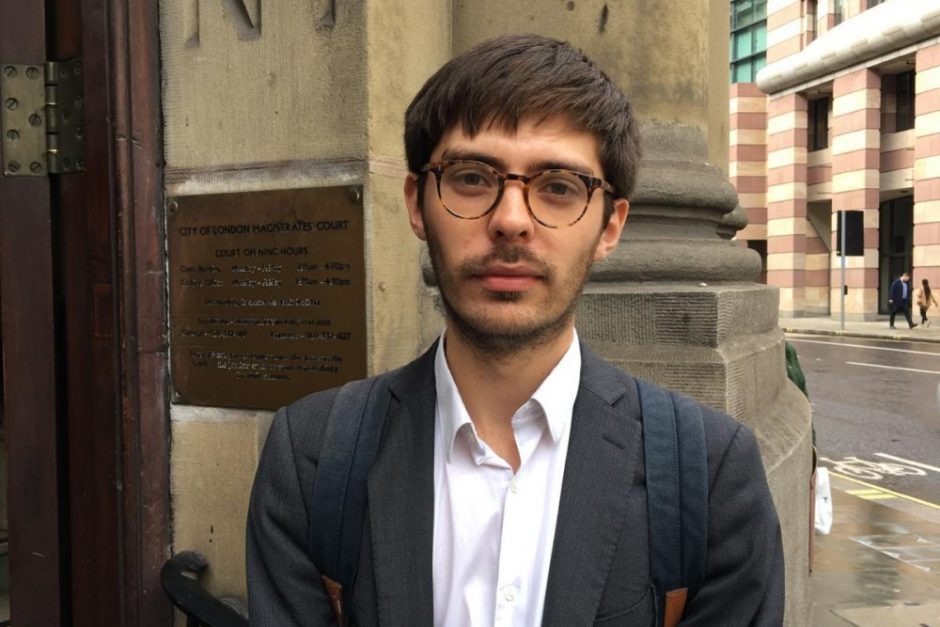 Jackson was arrested on the first Tuesday of the April Rebellion near the boat in Oxford Circus under Section 14 of the Public Order Act. At his trial on 21st January 2020 at City of London Magistrates’ Court he was found guilty, given a nine month conditional discharge and ordered to pay £330 in court costs.

I was present at the Extinction Rebellion protest at Oxford Circus on Tuesday 16 April 2019. I had taken time off work specifically to join the planned week of disruption in central London commencing Monday 15 April.

I contend, however, that I was obliged to disregard the public assembly conditions by the necessity to protect life from the threat of climate breakdown.

I am not a legal expert, but it is my understanding that according to common law, an action is not criminal if:

I believe the actions committed by myself and other Extinction Rebellion protesters in April 2019 demonstrably meet these conditions.

The climate crisis is already causing and will continue to cause irreparable evil in the form of forced migration, death and extinction. Since the cause of the climate crisis is our current political, economic and social system, it is necessary to urgently transform this system and to take those actions which will help bring about such a transformation.

For this purpose to be achieved, an unprecedented collective human effort will be required. Non-violent forms of disruption, designed to pressure the Government into taking action, are an entirely reasonable contribution to this effort.

The evil inflicted, in this case the temporary, non-violent disruption of the ordinary functioning of the city, is vastly outweighed by the evil this disruption was attempting to avoid.

The threat we face

I would like to briefly outline to the court the scale of the threat posed by human-made climate change. The scientific context is vital in showing why the disruptive actions in April 2019 were necessary and proportionate. The scientific research informing these points is in the public domain and easily accessible.

It is no longer an exaggeration to say that humanity faces the prospect of extinction as a result of human-made climate change.

Scientists predict that if we fail to radically reduce our carbon emissions in the next ten years, we will surpass 4C of warming by the year 2100. It’s hard to imagine what our planet would like in this scenario, but, as author David Wallace-Wells has explained, it would probably mean that whole regions of Africa, Australia and the United States, parts of South America, and Asia south of Siberia would be rendered uninhabitable by direct heat, desertification, and flooding.

Even if we limit the increase in warming to 2C, we can expect flooded cities, crippling droughts, heat waves, hurricanes and monsoons to become normal weather. For island nations, this would amount to genocide.

In the past decade, the developed world has failed miserably to respond to a refugee crisis. But this crisis pails in comparison to what we can expect in the near future. The UN predicts that by 2050, just thirty years from now, there may be a billion or more climate refugees, ‘vulnerable poor people with little choice but to fight or flee.’ To get an idea of the scale of such a crisis, a billion was the entire global population as recently as 1820.

This is the scale of the threat we face.

It’s worth noting that of the five previous mass extinctions that have taken place in the history of this planet, all but one involved climate change produced by greenhouse gas. The sixth mass extinction is already under way. Scientists tell us that we still have a small window – around ten years – to determine whether humans will join the Bramble Cay melomys, which in 2019 was recognised as the first mammal to go extinct due to human-made climate change, or to pull back from the brink.

The UK is relatively lucky in that it will feel the most catastrophic effects of the climate crisis later than many other countries. However, I must emphasise to the court that the danger presented by climate change is by no means remote or abstract. On the contrary, the threat is present and tangible.

In the summer following the Extinction Rebellion protests in April 2019, this country experienced a deadly heatwave which can be directly linked to climate change. In July, the average number of deaths per day rose from around 1,100 to nearly 1,500. The temperature in Cambridge reached a record-breaking 38.7C.

The climate crisis has, therefore, already arrived in this country and we are already paying the human cost. Unfortunately, due to the way carbon dioxide is stored in the Earth’s atmosphere for centuries, a certain amount of global warming is already locked in and unavoidable. Nothing we could have done in April 2019 would have prevented those deaths in the summer, nonetheless I maintain that it is reasonable to view our actions as prompting a political response which may result in lives saved in the future.

Disruption is the only reasonable option

The argument that protestors have no need to engage in disruptive actions because they have other methods at their disposal, in particular the ballot box, does not hold water. Fighting the climate crisis exclusively through traditional non-disruptive methods is, unfortunately, not a proportionate response to a threat of this scale. These methods have been completely unsuccessful in prompting successive governments to take meaningful action on climate change.

In July 2019, the Committee on Climate Change (CCC) published a report declaring that the UK government is ‘failing to act on climate change and will struggle to meet its new 2050 net zero carbon target unless urgent action is taken.’ A separate CCC report found the UK seriously underprepared for protecting citizens from the impacts of climate change – even under an optimistic scenario of a 2C rise in global temperature. Our government, then, is failing in its most basic duty to protect its citizens.

The scientists have been clear that the window for meaningful action to tackle the climate crisis is vanishingly small. We simply don’t, therefore, have the luxury of waiting out a five-year parliamentary term and hoping for a better result next time. Since we can’t change the government between elections, the only option we have is to compel the present government (which at the time of the April protests was Theresa May’s government) to take the sort of actions necessary to avoid the breakdown of civilization within our lifetimes.

Of course, if the Extinction Rebellion protests had had no reasonable chance of effecting change with regards to government policy on climate change, then the argument that the protests were necessary would be less compelling.

However, the very effectiveness of the protests in April demonstrate that it is entirely reasonable to view disruptive protests such as these as an effective method in fighting the climate crisis and thereby saving lives.

The Extinction Rebellion protests had remarkable success in changing public opinion on the subject of climate change. In the summer following the April protests, an Ipsos MORI survey showed that 85% of adults were concerned about global warming, the highest figure since they started asking this question in 2005.

In May 2019 Parliament declared a climate emergency, a direct response to the actions we are being tried for today.

In local government, many leaders have expressed their solidarity with the aims of Extinction Rebellion. In July 2019, Camden became the first local authority to hold a climate assembly, directly inspired by Extinction Rebellion’s demand for a similar national Citizens’ Assembly to forge a consensus on our response to the crisis.

And in the recent election campaign, Channel 4 broadcast the first ever party leaders’ debate dedicated to the climate crisis.

The rapid rise in public concern about the climate crisis and the change in rhetoric from our politicians has completely vindicated Extinction Rebellion’s strategy of non-violent civil disobedience. It has, crucially, provided evidence of a causal relationship between April’s disruptive actions and the beginnings of what will hopefully become a meaningful political response to the climate crisis – a response which avoids the worst-case scenarios set out by scientists and saves millions of lives.

If my argument is not successful today, I hope I will nonetheless have achieved something by putting my case to the court and perhaps influencing the people in this room on a human level.

Regardless of the result, I urge everyone to recognise the moral strength of the case for disruptive protest against inaction on the climate crisis.

The science couldn’t be clearer: we face an unenviable choice between extinction and rebellion. To insist that people simply keep calm and carry on is to condemn them to the former. Convicting peaceful protestors for necessary, proportionate actions sends a message that our present legal system is incompatible with that most innate human instinct — the survival instinct. If that is indeed the case, then any reasonable person would agree that this legal system is no longer fit for purpose.”

Jackson’s story was covered by the Islington Tribune.