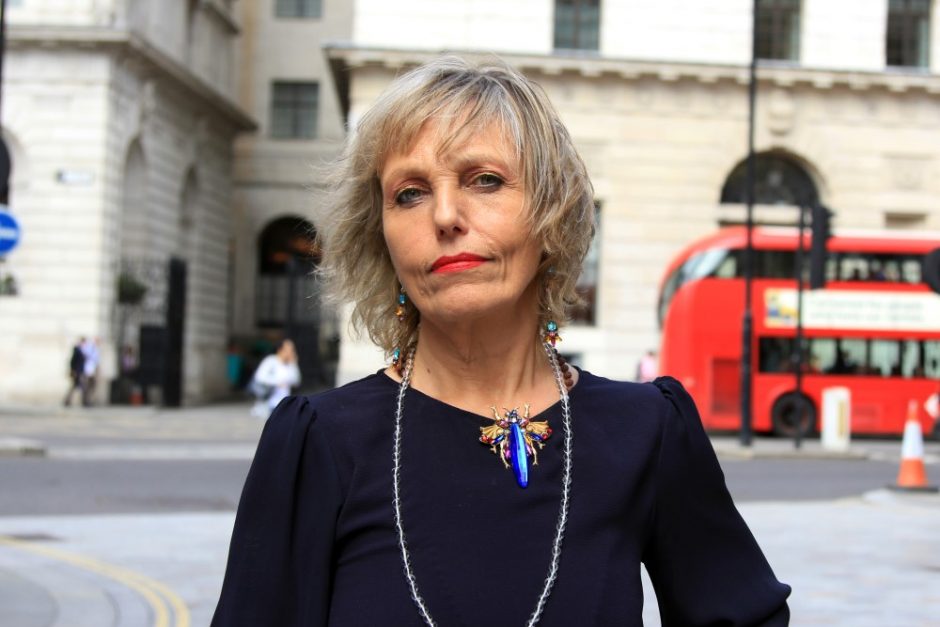 Annie was arrested on 18th April 2019 at Oxford Circus during the 2019 April Rebellion. She pleaded guilty at City of London Magistrates’ Court on 9th August 2019 and was given a six month conditional discharge and £105 court costs.

“I am afraid for us all, for all life. Government represents us, and has no choice but to take the advise of those who are sacrificing their positions in society to not only call for change, but to see that there is no other choice for us all than to change. I was a member of the public who became an accidental rebel because the police arrested me for following my heart. None of us have another choice we must all rebel against our own extinction.

I have been making textiles and jewellery since the age of 14, and from 1990, began to develop an ecological practise, winning international awards and recognition for which I was awarded a departmental scholarship to do a PhD in eco design. My work was studied on the national curriculum for many years. My thesis has been published in short form twice and is in all design college libraries. I wanted to find a way within the system to enable beneficial change.

Human beings are brilliant and full of love and creativity, but we have our system that we exist within. Money is subject to power, power is subject to abuse. In a country like this we need the people who have the ideas – the young people – to be heard, and then for that to be acted upon. In the time I’ve been making my eco work, which has been influential, I’ve seen terrible degradation of the planet and no serious concerted effort on the part of governments to a point where the situation is desperate for all life on earth. I’m terrified for myself, for my kids, for all people , for all life on this beautiful home planet. The government has to utilise its resources on behalf of us all, recognise the essential unity of human beings, and take the radical action that needs to be done.

I was a carer for my late husband who died of a brain tumour. Subsequently I became a yoga teacher and eventually wanted to help military with PTSD after a short relationship with a serving major in the British army, who had PTSD and put me in touch with an organisation in the USA where I took my training.

I am one of only 2 UK citizens who have this the full, degree level certification for teaching yoga in military environments, I went to the USA for this where I was mentored and worked, helping with serving officers in the VA there.

A week before the XR protests, I was hosting an ex Vietnam veteran and a female colonel who wanted me to take them to the changing of the guard. While there we were swamped by thousands of young people marching towards Buckingham palace in innocence and courage on the school strikes. My eyes poured with tears. I had tried so hard for my whole life to understand religious difference, to provide alternatives to consumerism and here were these beautiful young people who were asking to be heard and are still not being looked after by the government.

It was Greta Thunberg who asked me to be an adult. I then saw the children’s march in London. It walked towards me and I just cried my eyes out. The next week I found myself at Oxford Circus.

I was listening to young people speaking knowledgable and passionate near the pink boat. The day before I had seen police officers dancing around the boat with protestors. I felt optimistic that this was a movement that would have the right impact on government. I was an ordinary member of the public, I was not aware of any of the strategies of XR.

The police came along and asked me to move, I had been sitting there for only 1/2 and hour. and my heart just said no. I was shocked to be arrested.

My court statement was a letter written by a well known BBC correspondent who spoke of my dedication to children, to art, to sustainable design, to PTSD in the military and holistic health for all.

The magistrate listened earnestly, and then to my incredible surprise, spent 5 minutes congratulating me on my integrity and for all my good work, and for my courage at making a stand for this very important cause.

I have always been law abiding and the 18 hours I spent in the back of a van without water, standing on the ramp waiting to be processed and then hours in a police cell were extremely traumatic. Then waiting for months for the trial and being told that the police were trying to bring charges of potential manslaughter against me was horrific. Their tactic was to escalate and terrify, when in fact we were exercising our human rights, to gather, protest and have free speech. My barrister was a human rights lawyer who had worked in international situations of genocide. He was so concerned about these issues of protecting free speech, that he was working to protect us, ordinary citizens who at that point were the first to say we MUST address this issue NOW, otherwise there will be no planet or life to defend.

I had been arrested on Maunday Thursday along with a 75 year old female priest. As we stood with our respective arresting officers, she said what a great spiritual privilege it was for us to be imprisoned for trying to protect the planet that is beloved of God and on the very day when our Lord was taken to be crucified. I am a yogi, a practising christian and have studied all world religions with great compassion for my whole life. The experience was terrifying for me and I have been profoundly changed by my own actions.

I trusted implicitly the good of the government until that moment. ONLY GOVERNMENT has the authority and they must have the vision to take the action. That is why XR continues to have people throwing themselves, like moths to the flame in the path of the law, and unfortunately alienating so many people who have been betrayed by successive governments who have not enabled the necessary changes.”