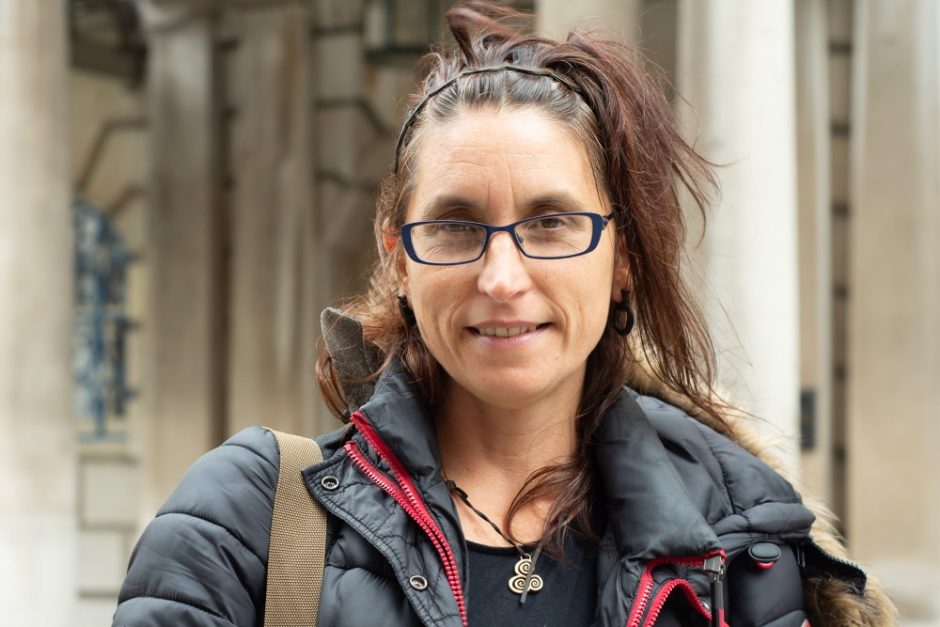 Vikki, who is also a children’s yoga teacher and previously worked for independent media, was arrested on Tuesday 16th April at Oxford Circus during the 2019 April Rebellion under Section 14 of the Public Order Act. She pleaded guilty on 27th September 2019 at City of London Magistrates’ Court and was given a six-month conditional discharge and ordered to pay £70 court costs.

“I was sat beneath the pink boat, but not locked on. So many people had worked so hard to set up that protest space in Oxford Circus. I knew that if enough of us didn’t sit down right then, at that point, then we would lose the site. My Affinity Group had decided in advance who could be arrested, and who would be support crew. In the end, three of us were arrested that week in Oxford Circus. The others stewarded, did welfare checks, did kitchen shifts providing free food, and did media and messaging.

The judge in my court-room was respectful and sympathetic to everyone’s personal circumstances. She told me that in her opinion I was paid very little for doing an important job, so she only gave me minimum costs.”

From Vikki’s Facebook page on the first anniversary of the April Rebellion:

“Love to all the XR organisers, who kept the fire inside and were so heart-led and brave, and just went out and SHOUTED and supported, and gathered, and welcomed, and protected, and enabled us to get out on the streets, one year ago.

From a small disruptive campaign of civil disobedience, XR suddenly became a global movement, answerable to everyone, for everything that had ever happened, both in activism and in wider society. And yet, it is fitting that it did, we all should be answerable: constantly evolving, constantly questioning, constantly changing, constantly learning. Nothing is perfect but that does not make it unimportant. We were not offering “the answers” – simply making sure that the world started asking the right questions.

I just want to honour everyone who left behind comfort and security, and for some people who sabotaged respectable careers, and their health, and all kinds of other things, that week in London, in order to change the international conversation about a planet that is still on fire.

And to everyone who supported us from a distance and afterwards: that will not be forgotten.”