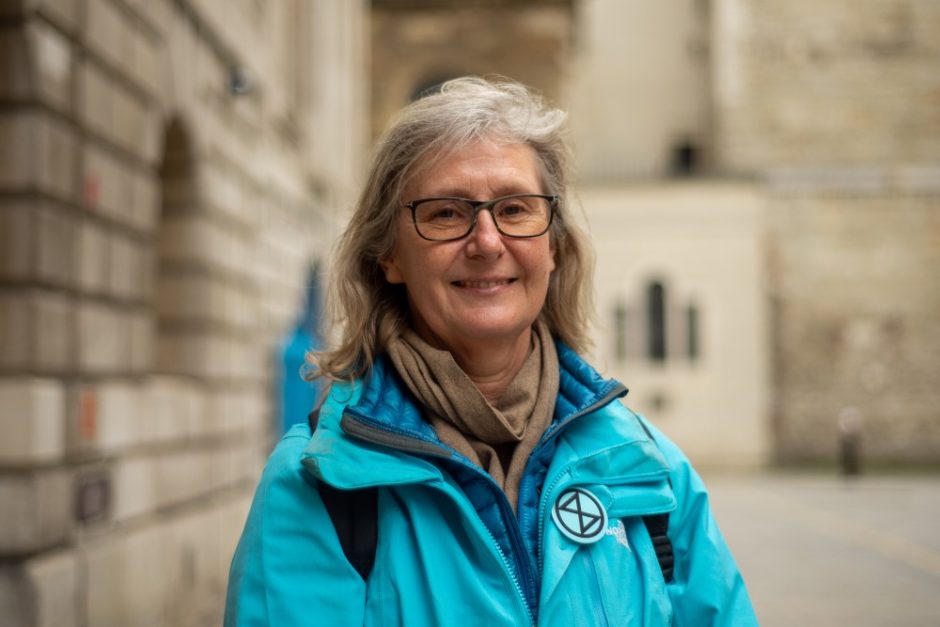 Kate was arrested on the first day of the 2020 September Rebellion at Parliament Square and charged under Section 14 of the Public Order Act. She pleaded guilty at City of London Magistrates’ Court on 19th February 2021 and was given a six month conditional discharge and £107 court costs.

“I did not intend to get arrested. My husband has been arrested three times (we originally got involved with Extinction Rebellion on the five bridges blockade in November 2018) but if I’m honest, up until that day, I was always too scared.

However something shifted inside me as I sat on the road and watched so many ordinary people, younger and older, get arrested. I turned to my husband and said “I’m not moving, I’m staying right here. This cannot continue. I have to make a stand. If these people are brave enough to risk arrest, I can be too.” So I stayed, terrified and for once, grateful for having to wear a face mask, as no one could see my trembling bottom lip.”

“I am pleading guilty today because, as I understand it, I violated Section 14 of the UK’s Public Order Act 1986. However I do not feel guilty and, as a member of Extinction Rebellion, I stand by my actions.

The reason I do not feel guilty is because, having read the scientific evidence and seen what is happening around the world, I felt there was no alternative but for me to do my part in what I feel is a failure of the government in its duty of care towards me and all citizens.

I am a former City employee but more recently retrained as a psychotherapist and have been a law-abiding citizen my entire life.

I have the upmost respect for the law, lawmakers and law-enforcers and would never in a million years have ever expected to find myself sitting in a road and risking arrest. However I had to do something.

It would be easy to say that I got swept up with everyone else on that day, and certainly I was influenced by seeing so many ordinary people (many younger and lots older than me) risking being arrested, but it was more than that. I suddenly knew I could not just sit on the fence and wait for what’s already happening to carry on happening without doing something, ANYTHING to raise the gravity of the situation.

How could I stand by and do nothing? We are custodians of this planet; we do NOT own it and we have a duty of care to look after it. This is what we are failing to do and that should be punishable by law.

So many amazing organisations and people have tried for many years to raise this issue to no avail. It saddens – no, more than that – it makes me ANGRY that it seems the only solution left is peaceful civil disobedience, non-violent direct action, so I stayed sitting, prepared (albeit scared) to take the consequences.

I’m a step-mum, auntie and god-mum and I WANT to leave a safe and sustainable planet for the next generation and the generation after that.

I want them to know that I tried. Like so many others before me and hopefully many after me, to do something, ANYTHING to get the world to wake up before it’s too late.

Thanks to Extinction Rebellion, Parliament declared a climate emergency in 2019 and these issues are now much higher up on the agenda and in people’s consciousness, however the government still fails to act and each day that passes we are getting closer and closer to the point of no return.
If my actions, in their small part, help to change this so that we can find a way for a better future and stop using up a year’s planet’s resources in seven months then this will be worth it.

I will take my punishment for what I did on Tuesday 1st September 2020. I didn’t want to break the law but it seems I did, and I will continue to do so because I love this world and it seems that peaceful rebellion is the only way to get anyone to listen and hopefully act.

So, I humbly ask, as you make your decision today, to please take into consideration that all I, we, are trying to do is to help leave our children, your children and their children with a habitable planet.

Thank you for listening to this, my mitigating circumstances.”