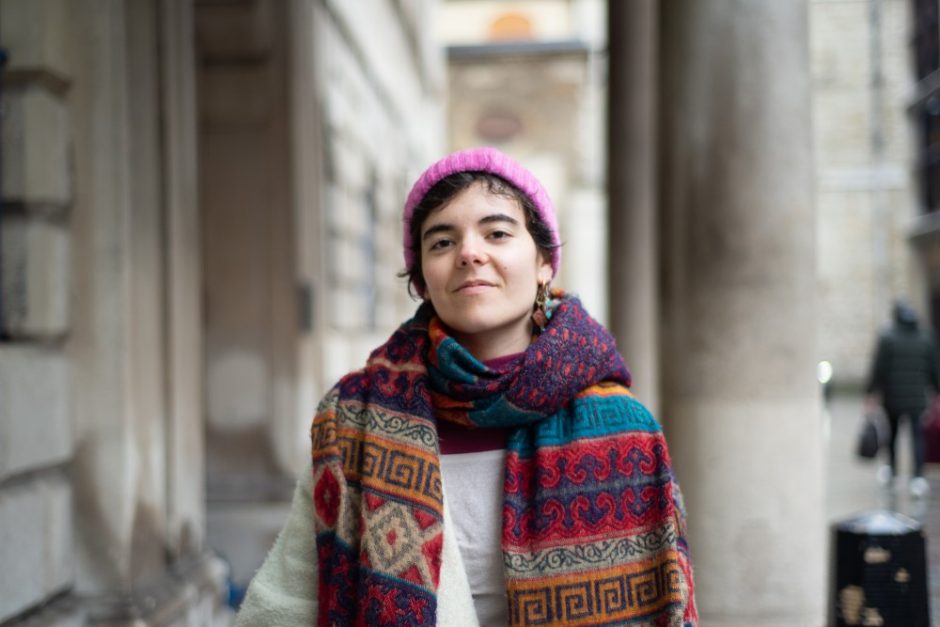 Isabel, who is studying psychology and sociology at Brighton University, was arrested on 9th October 2019 during the 2019 October Rebellion and charged with Obstruction of the Highway. She accepted a caution at her plea hearing at City of London Magistrates’ Court on 30th October. She was arrested again on 12th October 2019 and was again charged with Obstruction of the Highway. She was tried on 4th February 2021 when her case was dismissed because the arresting officer was not present.

“I was arrested twice during the 2019 October Rebellion “Autumn Uprising”. In the afternoon of the 8th of October 2019, in Whitehall, I locked on to another rebel on the road. The police started arresting people that evening but eventually stopped, and so a few of us stayed locked on until the following day. I was eventually arrested at 11:43 on the 9th, and I believe shortly after that Whitehall was completely taken by the police.

I was arrested again on the 12th October. Again, I had been locked on since the previous afternoon, this time on top of a wooden tower that was standing on the road in Trafalgar Square. There were some other towers and locked on rebels that the police had arrested the previous evening but, again, they eventually stoppped, leaving I think only two towers left. There were four of us up on the tower where I was locked on, and dozens of police officers blocking the road and surrounding the tower and the roundabout the whole night. Some rebels who were on the square managed to literally throw some food, blankets and other bits to us up the tower (as the police didn’t help in facilitating this at all), which really helped given all the hours we ended up spending there. After a rainy night and having counted somewhere betwee 18 and 20 hours up on the tower, we were finally brought down and arrested (it was arround 12:30 in the afternoon then).

I was charged with willfull obstruction of the highway for both arrests. I went to City of London Magistrates’ Court on the 30th October 2020, where I accepted a simple caution for the Whitehall arrest, and pled not guilty to the Trafalgar Square one. I then had my trial for this charge on the 4th of February, 2021, where my case was dismissed. My co-defendent’s trial however did go ahead, and as our case was virtually identical we believe mine was only dropped because my arresting police officer (the one witness for the prosecution) was not present.

I got involved with XR and decided to allow myself to be arrested because I see the critical state that both the planet and humanity are in due to climate change. I see not only how it affects the future of every single living being but, importantly, how it exacerbates social injustice and inequality as we speak. Knowing this, and acknowledging the priviledged position I was in (namely in regards to immediate safety and financial security, as well as minimal level of personal danger associated with being arrested due to being a white, cis, able-bodied person) – seeing all of this, I thought I would use this priviledge in this act of sacrifice that, in the grand scheme of things, is actually so small – but could hopefully contribute towards making a difference.”