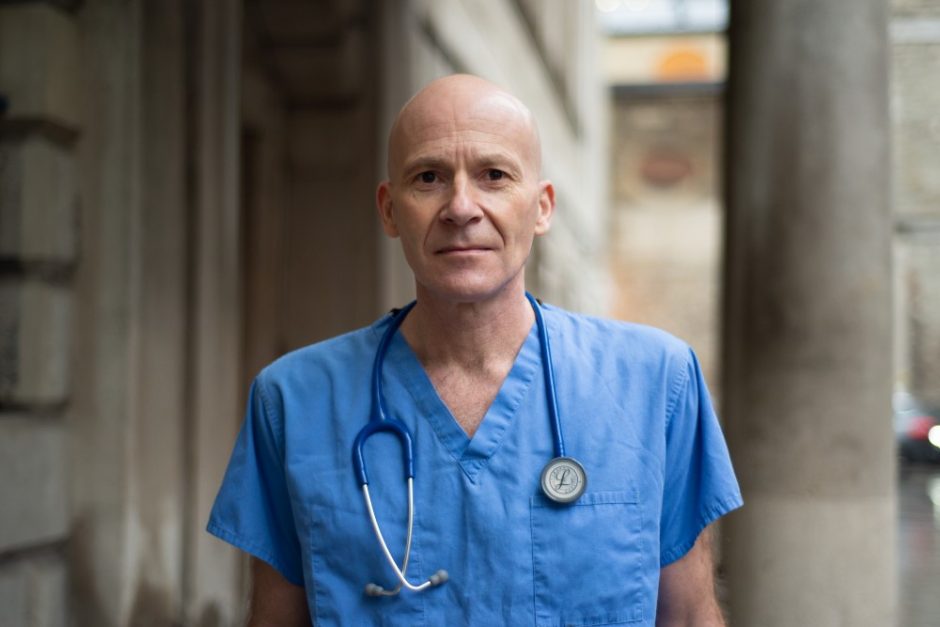 Steve was arrested at London City airport on October 10 2019 during the 2019 October Rebellion and charged with obstruction of the public highway. He was tried at City of London Magistrates’ Court on 4th February 2021 and found guilty. He received a six month conditional discharge and £400 court costs.

UPDATE: Steve appealed following the Supreme Court’s Ziegler ruling on the right to protest and his conviction was quashed in February 2022.

“As a health professional I believe I have a moral responsibility do all I can to preserve life and act to prevent risk of unnecessary harm. I became involved with Extinction Rebellion because as a father, as an uncle and as a human being I have a responsibility to act, to raise awareness to alert those in power to the imminent danger to the planet and all of us who share it. To ask those in power to act upon this imminent threat to health and life.”

My professional code of conduct identifies an overarching remit to protect the public.

Air pollution is a leading cause of global mortality, with the World Health Organization estimating over four million deaths annually caused by outdoor air pollution.

Public Health England’s own figures from 2019 attribute 36,000 deaths a year in England to long-term exposure and identify air pollution as the biggest environmental threat to health in the UK.They go on to identify strong evidence that air pollution causes the development of coronary heart disease, stroke, respiratory disease and lung cancer, and exacerbates asthma.

He adds “We are raising a generation of children reaching adulthood with stunted lung capacity”.

Children in London are growing up with lung volumes up to 15% lower than the UK average.

Professor Jon Bennett, consultant respiratory physician and chair of the British Thoracic Society’s Board, described the particles as “a real and present health danger to society”.

He adds: “It is really concerning that babies and children are particularly susceptible as air pollution can impair immune system development in the womb and adversely affect children’s cognitive development.”

Air pollution does not stop with immediate risk to children and the aforementioned diseases.The Lancet Commission identifies air pollution as a key modifiable risk factor in the development of Dementia.

Rather than acting to reduce pollution levels, London City Airport is seeking to expand its take off and landings increasing air pollution and the risks to those who are most vulnerable.

As recently as December 2020, London City Airport celebrated the completion of the construction of a full-length parallel taxi-way, expanding flight capacity even further.

The health costs of air pollution are higher in London than any other city in Europe (European Public Health Alliance, 2018). The costs measure the overall erosion of public welfare, defined as living a long and healthy life in a clean environment. The research quantifies the monetary value of premature death, hospital treatment, lost working days and other health costs caused by particulate matter, ozone and nitrogen dioxide.

The recent court ruling in December 2020, regarding the death of Ella Kissi-Debrah in February 2013, found that her death was caused by acute respiratory failure, severe asthma and air pollution exposure.

The Inner South London Coroner, Philip Barlow, found that air pollution was a cause of the death of the nine year old Ella. She was exposed to nitrogen dioxide and particulate matter pollution in excess of World Health Organization guidelines.

In evidence during the two-week inquest, Professor Stephen Holgate, an immunopharmacologist and consultant respiratory physician of the University of Southampton and Southampton General Hospital, said Ella was like a canary in a coalmine, signalling the risk to other Londoners from the toxic mix of pollutants such as nitrogen oxides in the air.

In the words of London Mayor Sadiq Khan: “I would do everything in my power to tackle London’s toxic air crisis”. He goes on to add there is an urgent need to take action.

For Ella time has run out, we need to take action to save other nine year olds in London. It is too late for words, action is required now.

When you see further pollution, further deaths, when you see a train coming down a track with impending disaster it is immoral not to act to stop that disaster. Air pollution is a medical emergency. This is not something that is happening in the future, it is happening now.

When I arrived at London City airport I stood outside with my placard identifying the risks of air pollution. I was moved by the Police from outside the airport. I followed this request and moved to the pavement where I was again asked to move. Finding no alternative space to protest I stood in the road.

I was again asked to move. I acted under the premiss of Article 11 of the European Convention of Human Rights providing the freedom of assembly, the right to protest, march or demonstrate in a public space.

As I travelled to you here today I contemplated my patients who have died or are seriously ill this week from COVID 19.

For all of my patients I have a moral responsibility to do all I can to preserve life and act to prevent risk of unnecessary harm.

As I stood in the road I acted as a health professional with the same moral obligation to raise awareness of the necessity to act urgently to prevent unnecessary harm.

I have never previously had any involvement with the police or breaking a law.”