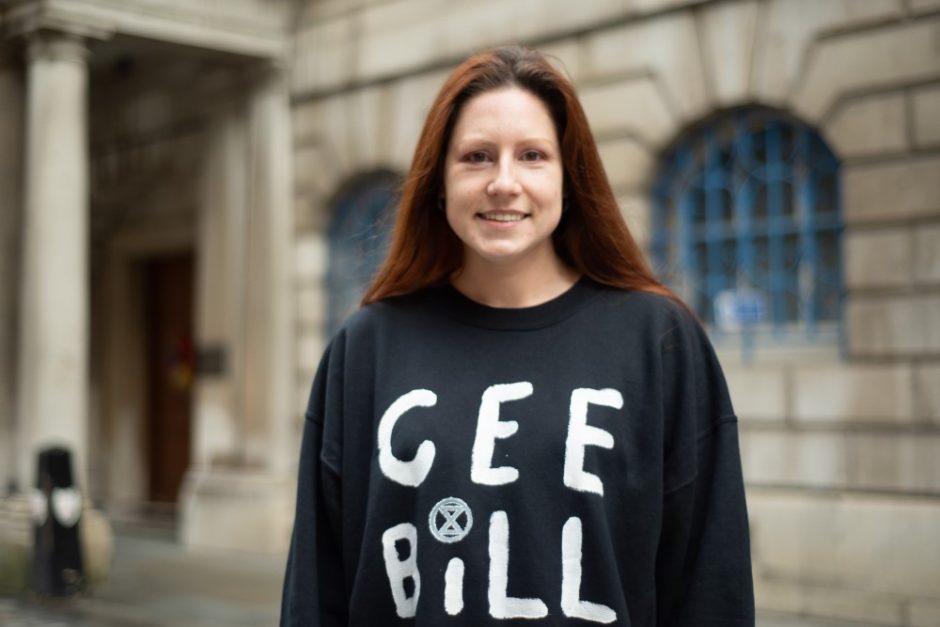 Shel, who is in XR Educators, XR Scientists, XR Art Blockers and XR Talks and Trainings, was arrested on 3rd September 2020 outside the Houses of Parliament after she climbed the fence with ten others then glued on to the Peers’ Entrance. She was tried on 12th January 2021 at City of London Magistrates’ Court. Her case was dismissed with no case to answer because her arresting officer had failed to correctly communicate the Section 14 conditions. She was arrested again during the 2020 September Rebellion for the Murdoch printworks action at Broxbourne and charged with Obstruction of the Highway. Her trial is scheduled for summer 2021.

“For 5 years I taught Maths at inner city secondary schools and pupil referral units. I don’t have my own children, I couldn’t actively choose to bring one into the world with what’s going on, but my students were my life. I was making a change to my students’ lives just as they were to mine too. My classroom was a sanctuary where they learnt about my passion, the art of mathematics. I adhered to the safeguarding guidelines and took these seriously to ensure my students were as safe and well as they could be.

What worries the kids the most is their futures. They are already brought up in a systemically racist and classist society that works against most of them, and then they see the world burning. They hear from family and friends in other countries of the extreme weather conditions directly affecting them. How are they supposed to have any hope when the adults around them are just watching on or maybe just giving them an extracurricular lesson about ‘climate change’ as this all happens?

When a 15-year old girl sat outside of the Swedish parliament with a sign, striking every Friday, she sparked a global movement. I watched many of my more socially affluent students thrive as they saw that their voices mattered, sparking changes to how school communities operated, questioning the carbon footprint of education, and more knowledge sharing of nature and sustainability; albeit more so in the independent sector.

In the meantime, many of my black students were still being stop-and-searched disproportionately, and others’ stomachs rumbled through the lessons with excitement of food at lunch since there’s not much at home for them despite their single mother working two jobs.

I wasn’t doing enough as a teacher. I was confined to a curriculum that was set up to fail the very students I taught in the hope I’d give them more opportunities in their future.

As a teacher, I was failing to safeguard the future of my past students and the children of the future by not taking greater action.

I used my privilege of an excellent grammar school education, thanks to my parents, to share that knowledge and inspire others as a comprehensive school teacher. I now use my privilege to take part in non-violent direct action with Extinction Rebellion and other social movements and organisations, as being in the classroom, being politically active, signing petitions and going on marches has not worked.

We are in a Climate and Ecological Emergency declared in May 2019 by Parliament, while in my hometown, London, a school girl Ella Adoo-Kissi-Debrah died in 2013 and this year the cause of her death concluded that air pollution made a material contribution to her death. This is affecting children in our country already, Ella died 7 years ago and many more will have done so since her death too as air pollution levels rise to toxic levels in parts of Central London. Our children are dying, here in this very city. This is urgent.

The Climate and Ecological Emergency Bill was put to parliament on 2nd September 2020 and was put aside for a second reading in 6 months time. 6 months? We have less than 10 years to stay within 1.5 degrees warming, our government is missing almost all of its Paris Agreement targets, and we’re delaying acts of parliament that are beyond urgent, there to safeguard our futures and the next generation??

It was my duty to act immediately.

Our politicians are failing to safeguard our futures. We the people must do what we can to enact the change we so greatly need, and changes, that if had been made sooner, could have saved Ella and the hundreds of thousands of children who have lost their lives or whose health has been directly impacted by what the fossil fuels industry, corrupt governments and media lies have subjected us to.

And so I had to take part in non violent direct action on September 3rd as part of an autonomous group to safeguard future generations as our government is failing to.”