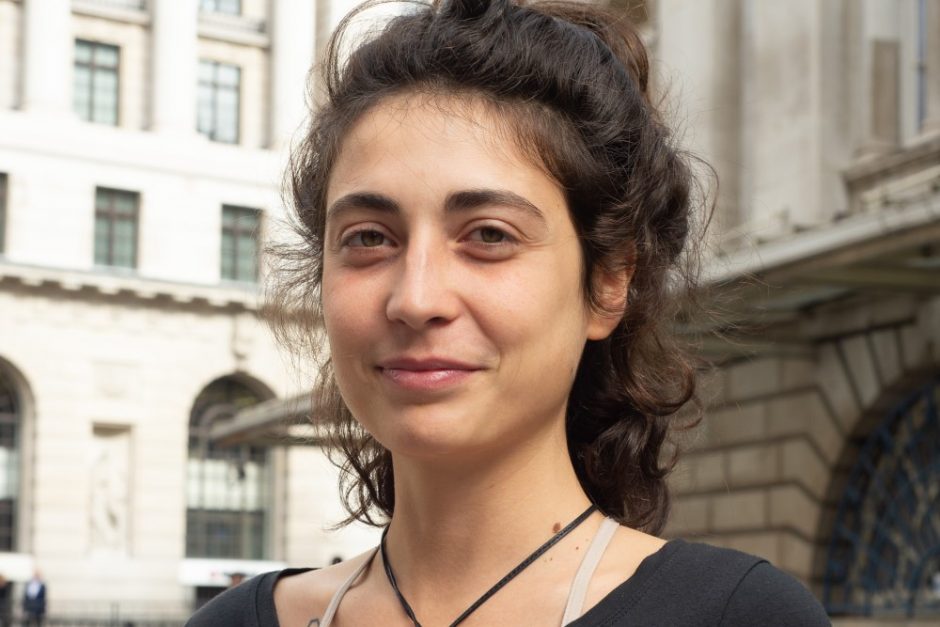 Bissera, a research assistant in brain and language sciences at Leeds University at the time of her arrest and originally from Bulgaria, was arrested on 16th April 2019 in Oxford Circus during the 2019 April Rebellion. She was charged under Section 14 of the Public Order Act and received a six month conditional discharge and court costs.

“I was arrested nearby to the pink boat at the first rebellion, on April 16th. I guess you could say I was arrested for dancing. I came to the protest alone, since none of my friends were up to it. I knew some people from XR from the October Declaration of Rebellion, but they were busy, so I was just on my own.

I wasn’t planning on getting arrested, it just kind of happened. I was dancing, I knew I shouldn’t engage with the officer and then I heard her say she’ll arrest me if I don’t move away and I thought, I’m at a point where I can’t move, so I didn’t and she arrested me.

I was a perfect arrestee, I was super compliant. On the way someone gave me a bust card (they put it in my shirt) and when I took it out to read it the police officer started pulling it and then applied some kind of strong hold on me until I dropped it. I was so angry and upset, I smelled of fear.

I didn’t really know what to do at the police station, so I just did what they asked me to. They released me after a few hours. I had come straight from work and had my backpack, but didn’t want to take it to the police station with me, so I left it in the middle of Oxford Circus, with my keys, money, phone, everything inside. When I came back, the speaker on the boat asked the crowd if they can see a blue backpack and it was swiftly sailed over to me. So it was a bit stressful, but I felt so good afterwards and so happy that the community I was part of was actually trustworthy and caring.

Why I joined XR: it’s very simple really. If a huge group of scientists from all around the world have been going on about something for years, then it’s probably a good idea to listen to what they have to say. XR tries to get people to listen and appreciate the truth from all the untruth we’re constantly showered with by (social) media.

The way we organise our society is clearly out of date, since we are unable to address vital issues in any meaningful way. XR tries to get politicians to finally do something about it and switch to an economy built around sustainability.

“Thank you to everyone who is here today: your honour, the prosecution, the defendants and observers, thank you all with all my heart and I hope you are able to hear me.

I am being prosecuted under Section 14 of the Public Order Act whilst peacefully protesting against the British government’s lack of appropriate response to the climate emergency. Here are some facts about this emergency:

We all know the list of shocking facts and figures goes on. But facts don’t speak to me anymore – I have become desensitised and despite my scientific background I don’t think that numbers are the language of the soul. I realise my reasons for being at Oxford Circus on April 16th can’t be summarised in counts, percentages, or predictions, they are better expressed through the images of suffering, as a result of climate change, that I kept being confronted with in recent times.

Here are some of those images:

To me, all life that is already afflicted by the effects of pollution and man-made climate change is furthermore suffering a huge injustice, the greatest of them all – being betrayed by us, by their brothers and sisters, who just happened to be lucky and be born in a different family, who prioritised education, or in another community, that is richer, or on another continent, that isn’t as hard hit by climate change just yet.

Moreover, the injustice of our betrayal is aggravated and becomes almost sinful because our reasons for that are trivial, hollow, and wicked:

It makes me ashamed to be one of the lucky ones.

I don’t need a god or the media or any institution to tell me what should be obvious: we are all in this together and this means respecting and looking after each other. I believe that those of us who have been lucky enough to know better, to see the root cause of the suffering of the other, and to have the freedom to make a choice how to act on this knowledge, are responsible to do so and I feel responsible not in front of god or some other higher power that governs me, but in front of my own conscience and for the better of my entire global family, of all living life on earth, with the same love for all plants and animals and humans.

So, what was I doing in Oxford Circus on the 16th of April? I think I was trying to show that I respect and care for the people and animals suffering the injustice of climate change and that I am ready and eager to change my ways, regardless of the inconvenience it may cause me. I was also there to ask for everyone else to take a moment and think about the huge problem pollution and climate change poses to our global family and to invite them to listen to their own conscience and make the choices they are lucky enough to know are fair and if this means being guilty of protesting in an area I wasn’t supposed to then yes I am guilty of it.

And if it means being guilty of causing inconvenience to businesses to run as usual then yes I am guilty of it, and gladly so.

And if it means being guilty of asking the whole of london to halt and change their ways, then yes, I am guilty of it.

And above all I remain wholly innocent in my own conscience and hope one day you will join me too.”