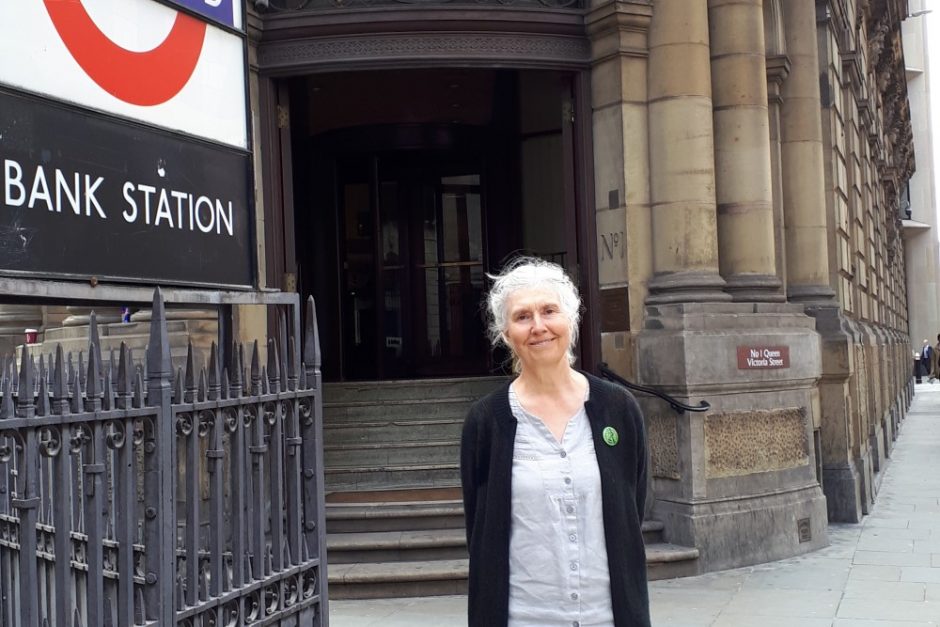 Maggie was arrested on Waterloo Bridge on 17th April 2019, during the 2019 April Rebellion. She was tried at City of London Magistrates’ Court on 7th October 2019 and found guilty. She was given a nine month conditional discharge and £105 court costs.

“I took part in the protest on Waterloo Bridge and was arrested on April 17th. I was subsequently charged with failing to comply with a police instruction to move from the bridge. I felt it was important to continue my protest on the bridge because I was convinced it might persuade the government to act. I want them to act to prevent loss of life and serious injury caused by climate and ecological breakdown.

My working life was spent as a family doctor, a GP. As a doctor, I was duty bound to preserve life. I retired seven years ago, but I still feel duty bound to preserve life. Globally, many people are dying because of increased severe weather events: storms, floods, fire, drought, hunger and human conflict. The consequences of climate change are already happening and will only get worse.

Since retiring from my medical work I have become involved in efforts to restore Nature. I am also a beekeeper. I am all too aware that Climate Change is damaging Nature, which is already severely depleted by human activity. In some very moving documentaries, including “Climate Change: the Facts”, David Attenborough has drawn attention to the heart-breaking plight of various animals facing extreme weather events. It has been hard to watch. Fruit bats, dying in their thousands, unable to withstand temperatures of over 50 degrees centigrade, polar bears and walruses failing to find sea ice and swimming until exhausted, and orangutans falling from the burning branches of forest trees.

We have all witnessed the decline of insects and other invertebrates. Germany has recorded a reduction of 70% of their flying insects and our loss in Britain is thought to be similar. Nature is struggling virtually everywhere in the world, but here in the UK our state of wildlife is shameful. In the State of Nature Report 2016, a comprehensive assessment of biodiversity, out of 218 countries the UK ranked 189, only a few from the bottom.

As a doctor, I was used to assessing what conditions needed to be treated as an emergency and then acting accordingly. I assess we have two emergencies now which are inextricably linked: climate breakdown and ecological breakdown. Last year the Secretary General of the United Nations, Antonio Guterres, said we have until 2020 to “change course”.

Otherwise we “risk missing the point when we can avoid the disastrous consequences for people and the natural systems which sustain us”. He was basing that calculation on the observed rise in carbon dioxide in the atmosphere. If you add to that calculation the knowledge scientists now have of feedback loops whereby one catastrophe precipitates another, well, we are facing, no doubt about it, an emergency. I challenge anyone to argue with that assessment.

The government must respond to the emergency. 2020 is in three months’ time. We have enough evidence. We know what must be done. Now we need action. Leave fossil fuels in the ground. Consume much less of the earth’s resources. Protect and Restore Nature. Fund the changes necessary to achieve these things. Consider the impact on the planet of all human activity, both current and planned, and act accordingly. This is a choice. Whether we choose to act or not, life in the future will be very different from what most of us experience now. But if we act, we can hope to preserve what matters most to us – life itself, in all its richness and diversity. If we don’t act, the consequences are unthinkable. ”