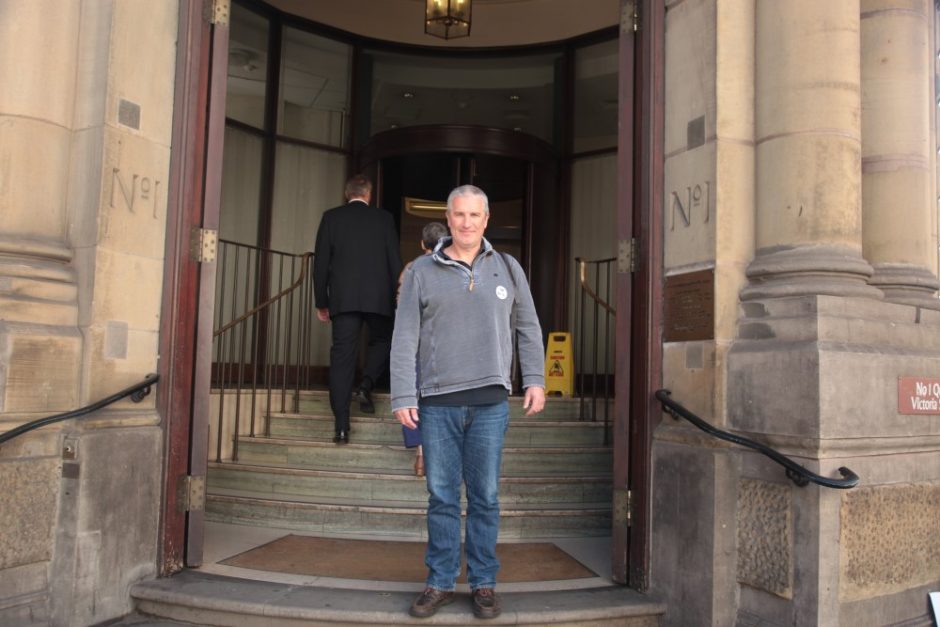 “I’ve seen butterflies in December. I was working in February when it was 21 degrees, doing winter work. I have been so frustrated for years, knowing what I know about the climate emergency, I couldn’t understand why I wasn’t doing anything. And I didn’t know why we were all not doing anything as a collective. But then last year I read about Extinction Rebellion – and I thought, that’s it, I’ve got something I can do. I went to the bridge action on the 31st October 2018 and I remember thinking, please don’t let this just be ten people, because it means so much to me.

A year ago the climate emergency was not in the media, it’s in the media all the time now. What Extinction Rebellion, Greta and all others have collectively managed to achieve within the year, with how we have pushed it into the mainstream agenda, has been amazing and I am very proud of all of us.”

I have a degree in Environmental conservation, work in the field of environment and ecology and am a father of two children.

I have been reading reports about climate change and biodiversity loss for years and have felt despair for what is happening. I have, like many others, signed petitions, gone on marches, emailed MPs, written letters and joined environmental organisations. These have either been ignored or replied to with polite indifference. This is the reason I sat on the road on the 20th April. I did not know what else to do.

Our climate has already warmed by 1°C of which we are already starting to see the impacts, such as the bushfires in Australia. With the current and pledged policies, we are on track for 3°C warming by 2100. This will have major consequences for humanity and all the other species that share this planet with ourselves. Kristalina Georgieva, the world bank chief executive said “The climate crisis is here and now. Massive wildfires ravage fragile habitats, city taps run dry, droughts scorch the land and massive floods destroy people’s homes and livelihoods. So far the response has been gravely insufficient”.

Extinction Rebellion has also tried to raise awareness of the ecological collapse, with some scientists believing that we are at the beginning of the sixth mass extinction, but the first caused by a single species.

Due to my degree and work knowledge, I am very much aware of the ever-increasing loss of our biodiversity. It is estimated that we have lost approximately 50% of our insects in the UK. The journal of Biological Conservation reports “If insect loss cannot be halted, this will have catastrophic consequences for both the planet’s ecosystems and for the survival of mankind”.

The Living Planet report states that we have lost 60% of wildlife populations in less than 50 years.

The UN biodiversity chief, Christiana Pasca-Palmer has stated “Loss of biodiversity is a silent killer”, “The numbers are staggering. I hope we are not the first species to witness our own extinction”.

Professor Johan Rockstrom also states “Only by addressing both ecosystems and climate, do we stand a chance of safeguarding a stable planet for humanity’s future on earth”.

There are many more frightening reports on biodiversity loss that point to an urgent need for action. I believe we have a small window of opportunity to make the changes necessary and a moral imperative to do so. I have, like many, mulled over how we can bring about this change. Civil disobedience has brought about some of the most important social changes in society’s history by highlighting wrongs and injustices within their systems. We are at that same juncture now. Our society, with how we treat the living world and the disregard for future generations is wrong and unjust. Unless we manage to change our society, the future for humanity and all the species that share this beautiful planet looks very bleak.

I would like to add one other point as to why I felt it necessary to protest on the 20th April and that is my role as a parent. I am very scared for what the future holds for them. My children are also aware of climate change and are scared too. A conversation with my son last summer resulted in him crying and saying “It’s not fair, I haven’t got the same future to look forward to as you did”. Sitting on Waterloo Bridge after hearing that was very easy.”