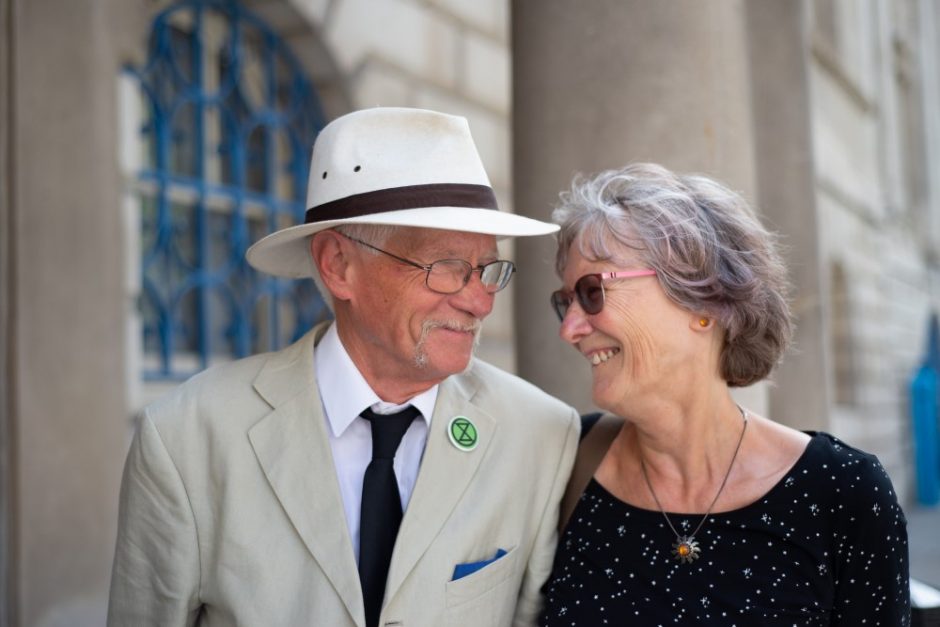 Tim, a former NHS orthotist and Sue, a former civil servant, were arrested together on Waterloo Bridge on 15th April 2019 during the 2019 April Rebellion. They both pleaded guilty to obstruction of the highway on 9th August 2019 at City of London Magistrates’ Court, with each receiving a six month conditional discharge and £105 court costs.

The couple, who have just celebrated their 40th wedding anniversary, are in the Ground Elders, an affinity group of over 65s. They were arrested again, along with other members of the Ground Elders, outside the private jet centre at London City Airport at an action during the 2019 October Rebellion. They were originally charged with obstruction of the highway and conspiracy to cause a public nuisance but were later notified that no further action would be taken due to insufficient evidence.

“Firstly, I am happy to live in a country where I can express my views in a peaceful way and my human rights are respected. I was driven to join XR after 30 or so years of writing to and petitioning politicians and getting nowhere. It was thus that I put myself on Waterloo Bridge in April 2019.

As one of the people from the post-war generation who is responsible for what is now occurring, I am really concerned for my children, my family and friends’ children, grandchildren and all children and young people around the world, as temperatures and sea levels rise.

I feel sad that politicians appear to listen more to lobbyists rather than scientists.

We must Tell the Truth about climate change and Act Now to reduce harm, save what we can, find a way to live differently and find out what is really important to us.

The Greenland ice sheet is the largest in the world and this season’s ice melt has already contributed to global sea level rise.

I feel angry that universally it appears to be business as usual when there is clearly a climate and biodiversity emergency. People in the global south are already being affected.

“Humankind has not woven the web of life
We are but one thread within it
Whatever we do to the web, we do to ourselves
All things are bound together
All things connect”

We are all in this together!”

“Thank you: I plead guilty to an act of civil disobedience. My mitigating circumstances are that:

I feel desperate because for 45 years I have known that climate change was a serious threat and yet here we are with virtually nothing being done and moving towards an irreversible catastrophe.

I feel outraged that successive governments have failed to protect me and my family from impending economic and social breakdown and potential human extinction.

I feel deeply saddened that each and every day over 200 species become extinct, losing our vital ecological balance and many potential solutions to human problems for ever.

I feel incredulity that intelligent people in high public and corporate office continue to deny the reality of scientific fact and conduct business as usual.

I feel proud and privileged to live in a country where I am able to express these feelings.

The UK Government HAS declared a Climate Emergency. If this is the truth then we must all – ACT AS IF THE TRUTH IS REAL”