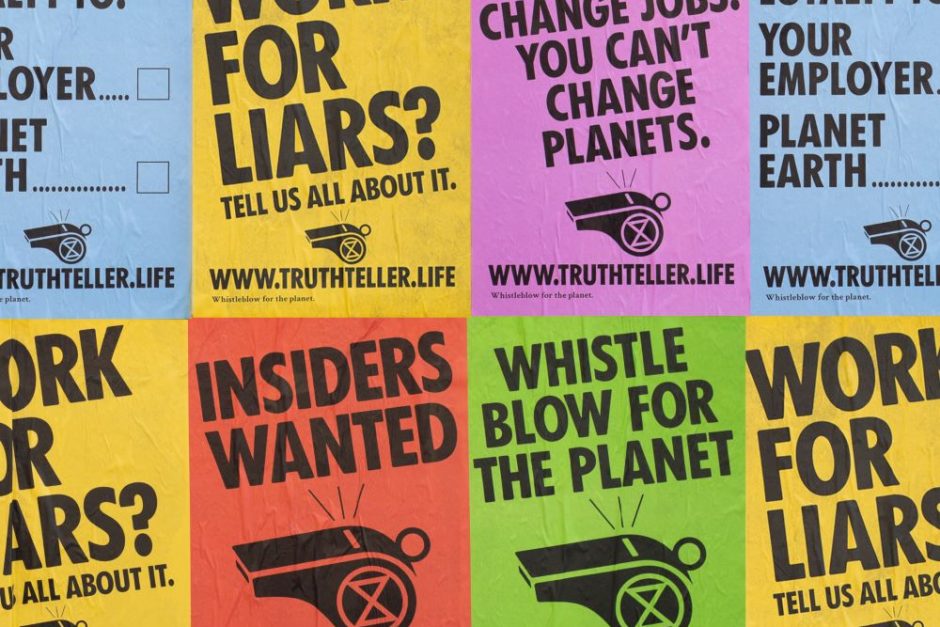 Extinction Rebellion has launched its secure, anonymous whistleblowing platform, TruthTeller.Life, with a campaign of innovative actions aimed at employees of climate-damaging companies.

Extinction Rebellion is asking those with insider information to safely and anonymously reveal what they know through TruthTeller.Life. Information received will be published in collaboration with trusted media outlets.

TruthTeller is testing a new type of precision activism, by proactively seeking out potential whistleblowers in particular companies within target industries, including fossil fuel companies, banks and other businesses.

By directly approaching employees, TruthTeller is putting company bosses on notice that climate-damaging activities are at imminent risk of exposure. TruthTeller is particularly keen to expose greenwashing and spin by companies saying the right things in public while harming the planet in private.

Launch actions, adapted to the lockdown conditions, where most people are working from home, have included:

Unauthorised inserts in the Financial Times titled How to Save It, spoofing the paper’s glossy consumer magazine How to Spend It and inviting FT readers to whistleblow. Inserts were placed by XR volunteers into copies of the Weekend FT (6th/7th February) on supermarket and newsagent stands.

1000s of calling cards being posted through letterboxes in affluent neighbourhoods inviting senior company employees to Whistleblow for the Planet while they work from home. Target neighbourhoods have so far included Kensington, Mayfair, Hampstead, Chiswick and other executive-rich areas, with more to follow.

The initial success of TruthTeller’s launch has caught the public imagination: A fundraising drive on crowdfunder Chuffed has now reached nearly £17,000, with £13,000 raised within 24 hours.

All money received will be spent on the next stage of actions. As well as continued digital disruption, TruthTeller will also be using targeted, creative street actions, once it is safe again to do so.

In addition to calling for any insider information that informs our understanding about the climate and ecological crisis, TruthTeller will also aim to fill the information gap left by company secrecy and inadequate oversight, by seeking answers to specific questions the public has a right to know.

Ultimately, the TruthTeller team hopes to bring about a radical change in attitudes to whistleblowing. By encouraging people to reveal what they know, and empowering others to do the same, TruthTeller hopes Whistleblowing for the Planet will come to be seen as any responsible citizen’s duty and right.

“We want to recruit insiders within the corporate world to be our eyes and ears and let us know what’s going on. Companies that are damaging the planet or greenwashing need to know they are being watched, and not just by us on the outside but also by their employees on the inside.

“After all, we’re all humans first, and employees second.”

Updates will be posted on our Twitter account @TruthTellerXR and on the TruthTeller campaigns page, which also contains information about how to get involved.

Contributions to the TruthTeller crowdfunder can be made via www.chuffed.org/project/truthteller.

Anyone with information they would like to share should visit www.TruthTeller.Life for details of how to get in touch. Potential whistleblowers should not visit the site on a work device.

To contact the team about anything else, email zoe@truthteller.life