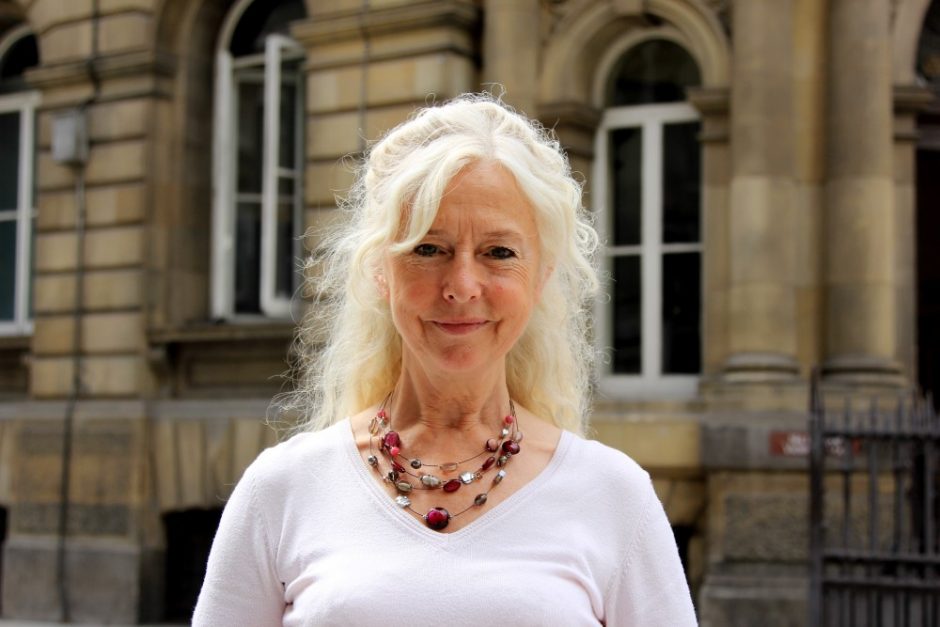 Maddy, who set up XR Swansea, was arrested at Oxford Circus during the 2019 April Rebellion and charged under Section 14 of the Public Order Act. She was tried at City of London Magistrates’ Court on 6th December 2019. She was found guilty and given a conditional discharge and ordered to pay £220 court costs.

“I discovered XR online in October 2018. The fact that Extinction Rebellion was non-violent and coming from a place of love and community really resonated with me. When I was on Westminster Bridge a month later, during the November 2018 Five Bridges action, there were five witnesses from around the world who told us their stories – about how they were being affected by climate change and how it was affecting their families and communities right there, right now. People around me were sobbing as they listened. It was an extraordinarily moving experience. I returned to Swansea and started up our local XR group.

Then, in the first week of the April Rebellion I was glued onto the pink boat as a ‘barnacle’, but actually wasn’t arrested then. I was in fact arrested the next day just walking through Oxford Circus, skirting around the boat, when I was stopped by a policeman because I was carrying an XR flag. He told me to leave under section 14. I thought, this is my moment and refused to go, so he arrested me. I dropped to the ground and they carried me to the Police van and I consequently spent the next 12 hours in a police cell. My case was heard on December 6th later that year.

I pleaded Not Guilty to the Section 14 charge. I was found guilty and had to pay £220 court costs and £1000 solicitor costs, which was covered by XR. Being arrested and going to court didn’t sit easily with me, but I knew I was on the side of right and this was more important to me.

I gave the following to my solicitor. When I took the stand to give evidence, he used it to question me about my reason for acting the way I did during the April Rebellion.”

“I’ve been concerned about environmental issues since the late 1970’s when I was in college, becoming a member of Greenpeace and FOE over the years, and more recently as an activist with GP and XR.

As someone concerned about the environment, I have written letters and sent emails to my MP and met her on several occasions. I have emailed my local councillor. I have signed petitions. I’ve also organised petitions and taken part in campaigns for Greenpeace, even dressing up as a penguin in a Greenpeace campaign to protect the Antarctic. I have attended the protest marches. Last week I was invited, with two other XR members from Swansea, to Westminster by Swansea MP Gareth Davies to attend the Government Plan for Net Zero Emissions debate. It was so depressing. Business as usual; the Tories patting themselves on their backs for what they achieved so far.

The reality is that our worries and concerns are falling on the deaf ears of Government. We are steaming full ahead on the path to Extinction. We are on the brink, looking into the abyss. My barrister has a bundle including the IPCC report; the World Scientist Warning to Humanity; the UN report; the World Bank; the Guardian Science Correspondent report. Instead of taking this irrefutable scientific consensus on board, the government is actually going in the opposite direction and giving the go ahead to the gas and oil industries to drill for new oil, continue to allow fracking for gas, and last week giving the go ahead for Drax to install four new gas turbines in North Yorkshire, overruling its planning inspectorate. Also giving the go ahead for a new gas-fired power station in Swansea, breaching the Paris Agreement and climate targets. This Government has also given the thumbs up to the third runway at Heathrow.

But I think the most important influence on me becoming involved with environmental issues was in my mid twenties, when I played the part of a survivor of the Aberfan disaster in South Wales in 1966 in a play called ‘Lies In Your Hands’. The disaster had had a deep and profound effect on me as a 10 year old and everyone in my South Wales community. But the true extent of the gross negligence and total failure of the powers that be in preventing this man made disaster was made obvious to me through the play.

For three years before the event, the worries and concerns of the villagers of Aberfan, the local waterworks engineer and some councillors regarding the safety of the slagheap perched on the hillside above the village were totally ignored by the local council and the National Coal Board Corporation. Letters were written, complaints were made, and in 1965 a petition was drawn up by the headmistress of the Pantglas Primary school along with the mothers from the school. To no avail. These concerns fell on deaf years and were totally ignored.

And so at 9.15 on 21st October 1966 the slagheap positioned above the village collapsed, slid down the mountainside and engulfed the school and some houses, killing 116 children and 28 adults, burying them alive.

The National Coal Board Corporation which had a firm grip on central government and wielded a god-like power at the time, denied any responsibility. Since the disaster, no one has been called to account, no one lost their jobs or faced punishment of any kind. I feel very strongly that parallels can be drawn here between the preventable man made disaster at Aberfan and the present man made Climate Crisis situation now.

We are in the midst of the sixth mass extinction. We can see the devastating effects of Climate Change happening right now, every day. It’s immediate. People are losing their lives in floods, mudslides and forest fires. Doctors are saying that people are dying of asthma related issues caused by air pollution in this country; last weekend the typhoon in Japan with deaths in the 60’s; the hurricane in the Bahamas with 64 deaths and 1500 missing last month. Chennai in India, the 5th largest Indian city, without a water supply. Cape Town in South Africa the same.

The senior Met Police officer MacMillan, who placed a section 14 on Oxford Circus in April, believed the assembly to be giving rise to serious disruption to the life of the community. Reports say one woman had complained to the police that she couldn’t get to Top Shop. I wonder how she’ll feel when she is sitting on top of the roof of her house due to flooding and can’t get to anywhere at all!

In April at Oxford Circus, I truly believe that I was acting to protect myself and others from a greater evil – I was protesting peacefully, exercising my rights to freedom of expression and assembly. It was reasonable, necessary and proportionate in light of the severity of the immediate threat of climate change. Like those mothers from Pantglas school I feel very strongly that it is my job and my duty, as a mother and grandmother, to protect my children and grandchildren. And as a Conscientious Protector of the Earth, your children and your grandchildren and all life on earth.

If a tiger were to charge towards my family, I would step out in front of it to protect them. Wouldn’t you? Well the Climate and Ecological crisis is that tiger.