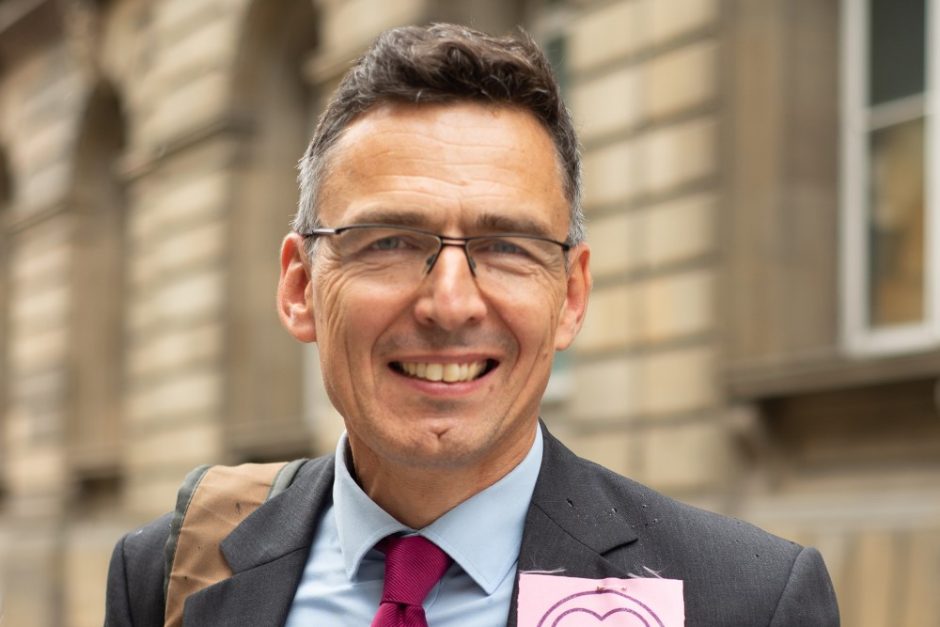 James was arrested at Oxford Circus in the second week of the 2019 April Rebellion under Section 14 of the Public Order Act. He pleaded guilty at City of London Magistrates’ Court on 27th September 2019 and was given a six month conditional discharge and £105 costs.

“I’m pleading guilty today because I broke the law. This is not a situation I expected or ever wished to be in. I am a 53-year old father of two with a clean record, a full-time job, a mortgage and a busy family life.

As an eight-year old I was sent to boarding school on the edge of Dartmoor, where I quickly learned that staying on the right side of authority was the smart way to get by. And in the current highly charged political environment, I feel strongly that it’s more important than ever to uphold and support the rule of law. So what happened to bring me before the court today? What compelled me to risk arrest and eventual prosecution, along with hundreds of others, for sitting in the road at Oxford Circus as part of the Extinction Rebellion protest in April?

The answer is quite simply that I had no other choice.

I’d like to explain that I have worked on environmental issues for nearly 25 years. First as a conservation volunteer, then a wildlife campaigner before a postgraduate degree gave me the opportunity to work as an environmental consultant, providing advice on sustainability strategy and policy to large corporations, governments and the United Nations. More recently, I’ve worked for two environmental charities and a renewable energy company, in all cases helping to develop new approaches for engaging communities in the transition to a zero-carbon economy.

Meanwhile, I’ve also supported numerous campaigns, signed petitions, voted for greener politicians and worked on practical environmental improvements in my own community. Over time though, I’ve become increasingly despairing at the lack of meaningful government action to address climate change. The truth is, nothing has changed and so things have just got worse.

Through its continued support for fossil fuel extraction, airport expansion and other carbon-intensive developments, our government has seemed wilfully ignorant of the problem, if not complicit in its causes. This despite mounting evidence over the past 20-30 years of the threat to human and all natural life caused by man-made global warming. Evidence which is no longer limited to scientific forecasts of future temperature rises and their potential impacts.

Instead, we’re now witness, on a nearly weekly basis, to news reports of extreme weather events, all made more severe by the heating of the atmosphere and oceans that has already taken place. And quite terrifying stories of the accelerating destruction of our natural world, caused by industrial pollution and massive habitat loss, as well as by the heating of the planet: Man-made catastrophes happening now which, in their own right, cause untold human misery and loss, but which also sound a warning – if we choose to listen – of much, much worse to come.

And so in April I came to London with Extinction Rebellion, intent on trying a different approach to bringing about the change that 25 years of my own and others well-meaning efforts had failed to achieve. Though I fully support its use as a last resort for tackling injustice, for the reasons I gave earlier, I have no great personal appetite for civil disobedience, and so was not intending to get myself arrested.

I came to London in the week before Easter, after the initial street blockades had taken place, mainly to help with outreach to members of the public in the area around Oxford Circus. But on Good Friday afternoon – sitting in front of the pink boat listening to moving testimonies from climate refugees, mothers, nurses and young people living in fear for their futures – something different happened.

As the police moved in to clear the area, I felt suddenly and deeply the exquisite vulnerability connecting me with the millions around the world already suffering as a result of climate breakdown; with all the people suffering the impacts of floods, wildfires, hurricanes and drought; and with the thousands of species being driven to extinction.

The same vulnerability I felt that day connecting me with the other protesters, police and passers-by at Oxford Circus, with people right across London and the rest of the country; as it does today with everyone in this courtroom and as it always will with my two young sons whose futures I hold more dearly than anything else.

In that moment of clarity, I realised I had no other choice but to break the law. It felt like my moral duty and my last chance to draw attention to the growing climate emergency, to call government to account for its failure to act and so to help prevent greater harm to people and further destruction of the natural world. This is why I spent the next 13 hours in custody and why I’m here before the court today.

I would like to stress that I took no pleasure from the disruption caused by the protest to the people of London, or from extra strain placed on the police and other public authorities as a result. I am very sorry for the inconvenience and any financial or other loss this might have caused. But I respectfully submit to the court that I acted as is my right in accordance with my conscience, to help protect humanity and all life on Earth from much greater harm in years to come.