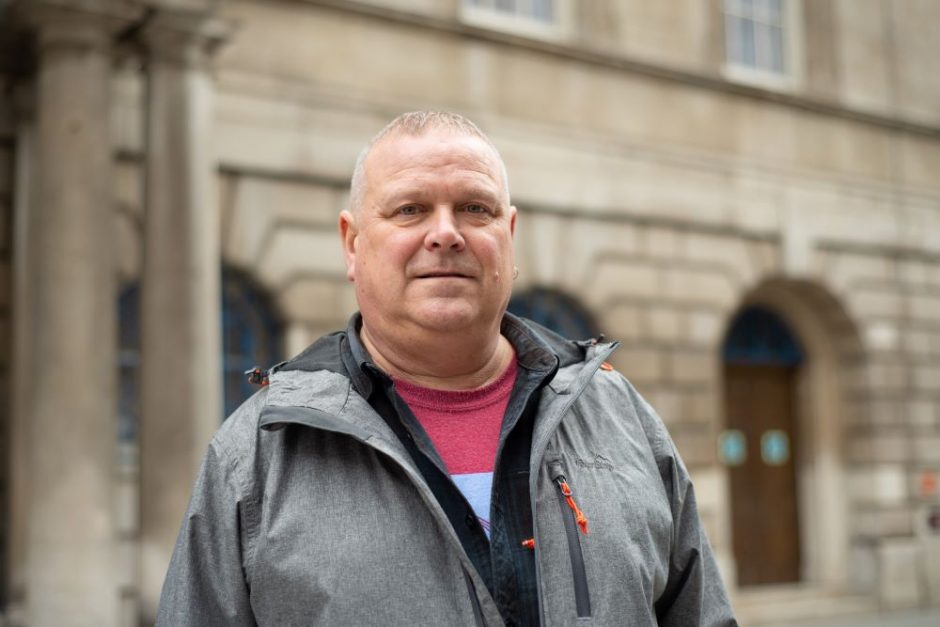 Mark, who helps disabled people to adapt their homes, was arrested during the 2019 April Rebellion under Section 14 of the Public Order Act. He was tried on 13th January 2020 at City of London Magistrates’ Court. He was found guilty and given a nine month conditional discharge and £250 court costs.

“Like many people, I’ve realised for years that we should be doing something. I heard about the first protests and thought I had to get involved. We’ve had words – Cornwall County Council has declared a climate emergency, it’s in the vocabulary now and it’s raised awareness. But we still have a long way to go. I came in April. I came in October. I’ll come to the next one.”

“The decision to participate in the April Rebellion was not taken lightly. I asked myself if not me, then who? Should I leave it to others to highlight the inaction and some would say criminal negligence of governments and big business? I decided I couldn’t do that and that I must join others and act.

Like many who joined the action in April it was not without risk or sacrifice. I need an enhanced DBS check for my job working with people with a disability. Convictions can affect my employment with the local authority or a future employer.

The time taken off work and spent on Waterloo Bridge would have otherwise been spent at home in Cornwall with grandchildren, family and involved more run of the mill activities.

These mundane considerations were balanced with the belief that I could not ignore the global climate crisis, that I must act. I had to take part, to make the government listen, to tell the truth about the reality we are facing with climate change. I had to act in April to highlight what climate scientists and the Intergovernmental Panel on Climate Change have been saying for far too long. There is an existential threat and to do nothing is to accelerate towards tipping points beyond which we will be powerless to avoid a less inhabitable world.

I believe there is an overwhelming urgency for action and my actions on 16th April last year were of necessity. On that day, the same as every day since there were people around the world at genuine risk of immediate harm or danger, people suffering from air pollution, being made homeless, becoming refugees, experiencing famine, war and starvation as a direct result of climate change. We can change this and it is by raising the issue with government through the actions like those on Waterloo Bridge that are pushing for change.

Our only hope is to act now, but it is not individual actions that will count however laudable these are. It is action at the very top that is needed and this is what the April Rebellion was about, a shout to the top to listen to the science, listen to the people and not just those on Waterloo Bridge but people across London and the world. We may be able to slow the impacts we are already witnessing; the rising temperatures and sea levels, melting ice sheets, mass migration caused by famine, flooding, wild fires and other extraordinary weather events. We can all make efforts to reduce our carbon emissions, but it is at the highest level we need to see action and leadership on the issue.

For me this is what the action on Waterloo Bridge was about and I would say we were successful in a limited way. Shortly afterwards questions were asked in Parliament by opposition MPs, Labour Party policy changed and Parliament declared a climate emergency, although it is actions not empty declarations that are needed. For the sake of my grandchildren and others of their generation around the world I hope they are listening and are up to the task.”

Mark was interviewed by Cornwall Live.