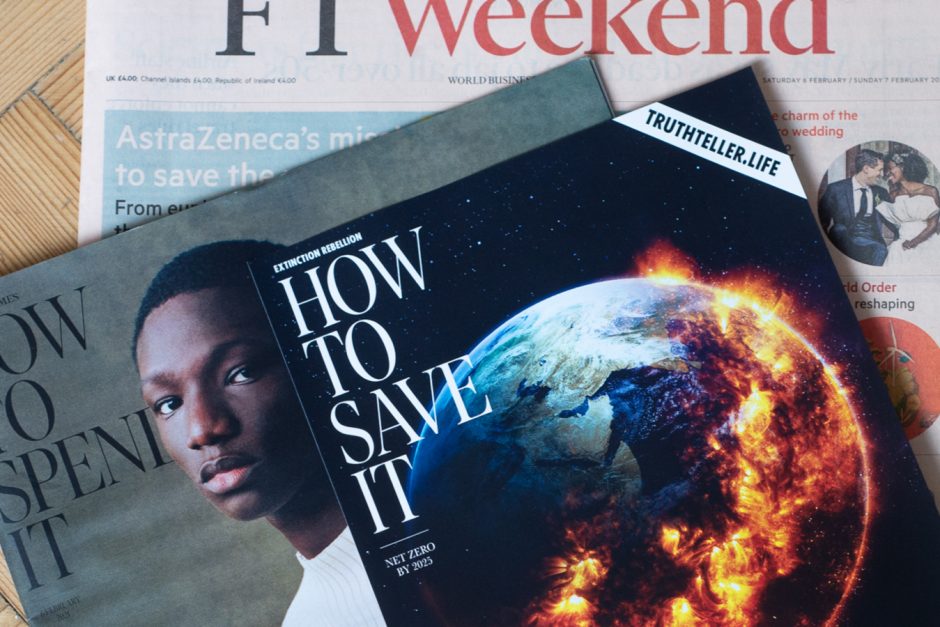 Extinction Rebellion is asking those with insider information to safely and anonymously reveal what they know through TruthTeller.Life. Information received will be published in collaboration with trusted media outlets.

TruthTeller is testing a new type of precision activism, by proactively seeking out potential whistleblowers in particular companies within target industries. These could include: fossil fuel companies, banks and asset managers, auditors and management consultants [6], insurers and risk consultants, multinational manufacturers and supermarket chains, among others.

This week’s actions are adapted to the lockdown conditions, where most people are working from home. They include:

Unauthorised inserts in the Financial Times  titled How to Save It, spoofing the paper’s glossy consumer magazine How to Spend It and inviting FT readers to whistleblow. Inserts were placed by XR volunteers into copies of the Weekend FT (6th/7th February) on supermarket and newsagent stands.

1000s of calling cards being posted through letterboxes in affluent neighbourhoods inviting senior company employees to Whistleblow for the Planet while they work from home.[7] Target neighbourhoods have so far included Kensington, Mayfair, Hampstead, Chiswick and other executive-rich areas, with more to follow.

All actions are being carried out in line with Covid regulations. Health concerns as well as government restrictions have made protest more difficult. But climate change is at a critical point. We cannot delay until Covid is fully under control.

As well as issuing an open call for any insider information that informs our understanding about the climate and ecological crisis, TruthTeller also aims to fill the information gap, left by company secrecy and inadequate oversight, by seeking answers to specific questions the public has a right to know.

By directly approaching employees, TruthTeller is also putting company bosses on notice that climate-damaging activities are at imminent risk of exposure. TruthTeller is particularly keen to expose greenwashing and spin by companies saying the right things in public while harming the planet in private. (Other revelations could reveal ecocide, cover-ups or lobbying.)

As well as digital disruption, and other Covid-safe activities during the launch phase, TruthTeller will also be: campaigning for company policies that support and protect whistleblowers; driving a public conversation about the vital role of whistleblowing; and using targeted, creative street actions, once it is safe again to do so.

Ultimately, the TruthTeller team hopes to bring about a radical change in attitudes to whistleblowing. By encouraging people to reveal what they know, and empowering others to do the same, TruthTeller hopes whistleblowing will come to be seen as any responsible citizen’s duty and right.

Zoë Blackler, coordinator of the TruthTeller project, said: “We have an information crisis, with private company HS2 Ltd silencing 1000s of people through gagging orders, public bodies refusing more freedom of information requests than ever before [8], and corporations everywhere attempting to mislead us with greenwash and spin.

“The public has a right to know about decisions being made behind closed doors that will affect all our futures. So TruthTeller is asking people to put their loyalty to their fellow humans and the future of the planet before their loyalty to their bosses. After all, we’re all humans first, and employees second.”

1. Documents that only surfaced recently reveal that oil giant Shell knew about the risks of global heating caused by fossil fuels as far back as the 1980s. If a whistleblower had come forward 30 years ago we might not be in the dire situation we are in today. Today, Shell’s renewable initiatives are dwarfed by its continuing oil and gas investments.

2. Last June, Minnesota’s Attorney General sued oil major ExxonMobil over its 30-year campaign to deceive the public about climate change. ExxonMobile is also under investigation by the US Securities and Exchange Commission, following a whistleblower complaint by former employee, Franklin Bennett, who alleges it has overvalued its assets for years, a practice he describes as “fraudulent and defiant behavior”.

3. According to research by the Rainforest Action Network, HSBC is the world’s 12th largest funder of fossil fuels, and the second largest in Europe. In the four years to 2019, HSBC’s investments ran to $86.53 billion. HSBC has recently been accused of greenwashing for continuing to fund coal projects while pledging to go carbon neutral.

4. The list of 253 organisations subject to non-disclosure agreements (NDAs) with HS2 Ltd was released to New Civil Engineer following an 18-month Freedom of Information battle. It includes: the Health & Safety Executive, the regulator responsible for overseeing the safety of the eviction of the tunnel protesters currently taking place at Euston; private contractors and consultants including Atkins, Balfour Beatty, Ove Arup, Deloitte, Mace, Morgan Sindall and Savills; dozens of councils along the HS2 route; and five universities. A further 38 unknown individuals are also subject to gagging orders. This use of NDAs was criticised by former construction minister Nick Raynsford in a major review into England’s planning system.

6. One particular industry in TruthTeller’s sights is auditing. The new business secretary Kwesi Kwarteng has vowed to reform the British audit market, which is dominated by the ‘Big Four’ – Deloitte, EY, KMPG and PWC. Auditors are responsible for ensuring companies provide honest assessments about the risk to their business, investors and shareholders from global heating and climate shocks.

7. Whistleblowing activity is on the rise, according to auditor and risk consultant Deloitte, “in ways that should have the focused attention of compliance executives across industries”. It identifies working from home as one of the primary causes, and advises firms among other things, to improve their whistleblower support programmes.

8. Peter Geoghegan, investigations editor at Open Democracy, documents “the current culture of opacity” in the latest issue of the London Review of Books, noting that “the number of complaints about FOI requests being stonewalled has risen by 70 per cent in five years, but the information commissioner has never demanded that a public body stop ignoring requests”. Today, national newspaper editors have joined forces to demand urgent action to protect FOI.

9. The TruthTeller project is coordinated by investigative journalist and member of the XR media team, Zoë Blackler.

12. Those who would like to give financial support can donate via our crowdfunder.