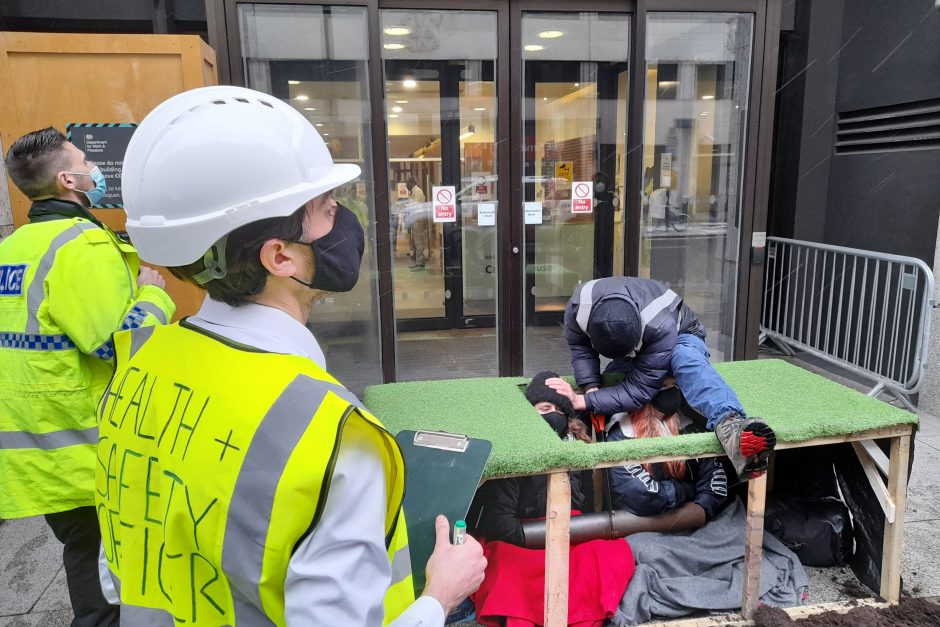 ‘Won’t somebody please think of the children?’ – Extinction Rebellion dumps soil outside HSE in London demanding a safe eviction for the Euston tunnellers

BREAKING: A small group from Extinction Rebellion have dumped soil outside the Health and Safety Executive (HSE) offices in London this morning, the UK government agency responsible for issuing the health and safety guidelines for the eviction at Euston Square Gardens.

A makeshift tunnel is blocking part of the entrance way with two people inside locked together using a metal tube. Two others have climbed on top of the entrance canopy and are holding a banner that read ‘Stop HS2 / Save Lives’. They are repeating calls for the HSE to release their report showing full transparency that all safety concerns have been considered for the eviction.

The protestors are there to draw attention to the total disregard for human safety from the National Eviction Team (NET), and the parallels with the government’s lack of concern for human and planetary health in regards to the climate and ecological emergency.

Dr Vishal Chauhan, former A+E doctor, taking part in the protest, said: “These people in the tunnel, most of them young people below the age of 23, are risking their lives to highlight the government’s failure to act to address the climate emergency. Yet the Health and Safety Executive is failing to act to protect their safe eviction.

“It is clear that we live and work in a system which upholds the interests of big business and political power over the Health and Safety of the public. The extraction and eviction methods have ignored HSE guidelines and expert opinions on safe practice, in the same way we see the government doing so with the climate crisis.” [1]

While health and safety regulations fail the Euston tunnellers, – the majority of whom are under the age of 23 – by carrying on the destruction caused by HS2, the UK government shows the very same disregard for the health and safety of the UK public. The climate and ecological emergency is, after all, the greatest health crisis of all time and the continuation of major infrastructure projects that will never be carbon neutral, and which devastate precious ancient woodland that we need to sustain life, shows the prioritisation of corporate profit over the health and security of people and planet.[2][3]

The Euston saga is taking place at a time when criticism of the government and its lack of action on the climate emergency is mounting. Just last week the ‘Godfather of climate science’ James Hansen wrote a letter to the Prime Minister saying he was showing “contemptuous disregard” for young people in the year the UK hosts COP26, by giving the green light to the Cumbria coal mine.[4]

The tunnelers actions also coincide with the publication of the Dasgupta Review on the Economics of Biodiversity last week, which said that prosperity has come at a “devastating” cost to the natural world, to which the Prime Minister responded by saying, “We are going to make sure the natural world stays right at the top of the global agenda.”[5]

Since Rollie and Lazer – aged 17 and 20 – became the first to leave the tunnel on Friday and Saturday nights, a focus on the role of young people within this climate and ecological emergency has again come into stark contrast.

Sally Davidson of Extinction Rebellion, said: “That young people are taking it upon themselves to take desperate action like this while the government fumbles and diverts responsibility to future generations, should shock us all.

“Boris Johnson said last week that the UK is going to make sure the natural world stays right at the top of the global agenda, and yet this project on his own doorstep is destroying internationally protected wildlife sites we desperately need, including trees, plants and animals, all of which are part of ecosystems that have been there for hundreds of years.[6] These brave young people are taking more responsibility than those in power elected to keep us safe and we should be thanking them for their dedication to raising the alarm in this way.”

Before leaving the tunnel on Saturday night, in a video recording, Lazer called on MPs to back the Climate and Ecological Emergency Bill, which is due to have a short debate in Parliament tomorrow.[7]

Just two weeks ago, the government also delayed the long awaited Climate Bill for the third time since work began on it in July 2018. – The bill is designed to replace EU rules following Brexit but it continues to be put off despite warnings from environmental groups that the delay would leave the UK without vital laws to restore nature and tackle climate change and damage the UK government’s  credibility in upcoming climate negotiations.[8]

[3] Why keeping one mature street tree is far better for humans and nature than new ones: https://theconversation.com/why-keeping-one-mature-street-tree-is-far-better-for-humans-and-nature-than-planting-lots-of-new-ones-154114?fbclid=IwAR3XgdgaRZkb8aHndgQCEal_NepOxhADLK0TrAuPpQbl_nIeHz7hF1PaqtY

[4] James Hasen and other experts pile pressure on Boris Johnson over Cumbria coal mine: https://www.theguardian.com/environment/2021/feb/05/experts-pile-pressure-on-boris-johnson-over-shocking-new-coalmine

HS2 Rebellion is an alliance of groups and individuals campaigning against HS2, including but not exclusively: StopHS2, Save Cubbington Woods, Crackley Woods Protection Camp, Denham Ford Protection Camp, Poors Piece Conservation Project and XR. It is entirely distinct from Extinction Rebellion, but does form part of the Movement of Movements, alongside other sister groups like Wildlife Rebellion, Animal Rebellion and Global Justice Rebellion.