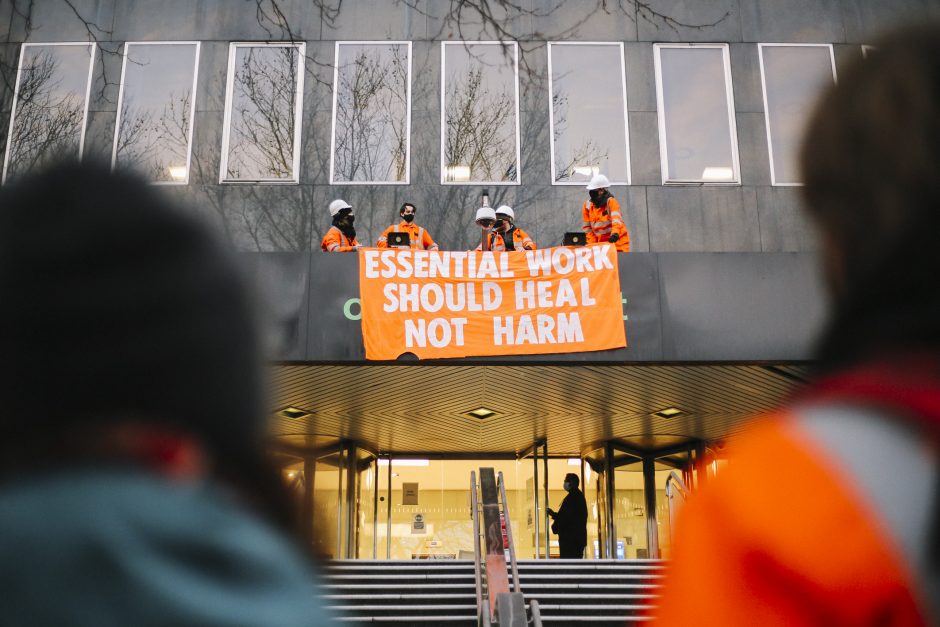 BREAKING: 4 people from Extinction Rebellion have used ladders to climb onto the canopy of the HS2 Ltd offices on Eversholt Street in London to display a banner that reads ‘Essential work should heal not harm’. On publishing this, all 4 people remain on the canopy.

The climbers are wearing orange jumpsuits, mimicking workers of the HS2 rail line, and have targeted the company offices which stand around the corner from Euston Square Gardens where 6 courageous earth defenders still remain in tunnels around 12 feet below the ground. The climbers are calling for the work at Euston Square Gardens to stop until a full safety assessment has been carried out to ensure the wellbeing of the people in the tunnels, in line with the High Court order from Mr Justice Robin Knowles last night.[1]

Sally Davidson, one of the Extinction Rebellion activists who climbed the building today, said: “We are being told to stay at home to save lives, that only essential work that preserves life should continue in this time of national and global crisis. However, HS2 continues their path of destruction, evicting people from their homes, cutting down trees that clean the air of our cities, and sub-contracting unqualified, ex-military NET bailiffs to inflict harm, fear and remove basic human rights from human beings using their bodies as a last hope to save one of London’s precious parks.

“This screams corruption and shows how our government routinely puts profit before people. The UK construction industry has not been protected at all from the virus, our government is risking construction workers’ lives rather than pausing their work to protect them, as well as the NHS.”

This show of solidarity comes almost a week after what is now known by many as the “Battle for Euston” began.[2] Tree defenders had been camped at Euston Square Gardens since August and living in tree houses, some of which were around 80 feet high, protecting some of London’s most historic trees. Over the course of 6 days the encampment has been removed, the trees all cut down, and only those in the tunnel remain.[3]

Lavender Robinson from Extinction Rebellion Hackney who occupied one of the trees in Euston Square Gardens last week, said: “In the midst of an economic recession, global pandemic, and climate and ecological emergency, public resources should be put towards essential work that benefits public health and well-being. Instead, over a hundred billion pounds of taxpayers’ money is being funnelled into HS2, who are currently carrying out an illegal and dangerous eviction at Euston Square Gardens, denying activists of their basic human rights. We are here to say that HS2 is not essential work – it is a wasteful and environmentally destructive white elephant that must be stopped.”

As the public remains glued to the story of the brave activists, the UK government snubs the occupation and insists on carrying on with the infrastructure project which is entirely inconsistent with promises to “build back greener” from the pandemic. The new train line will never be carbon neutral – by HS2 Ltd’s own calculations the project won’t be carbon neutral for 120 years – that’s its entire predicted lifespan.[4][5] Not to mention, it won’t help to “level-up” the country. In fact a study by the New Economics Foundation found that HS2 will serve wealthier passengers and deliver more benefits to London than the North.[6]

A number of the tunnelers are under 20 years old, one of whom, Blue Sandford (18), said in a video this week: “I’m angry that the government is still effectively ignoring this crisis despite declaring a Climate and Ecological Emergency two years ago. I’m in this tunnel because they are irresponsibly putting my life at risk from the Climate and Ecological Emergency. I shouldn’t have to do this – I should be in school – the trouble is, they are stealing that future and I have to stop them.”[7]

They join many young people rising up to defend their futures around the world. Only two weeks ago two young people began a hunger strike in protest against the government giving the green light to a new coal mine in Durham, another decision which exposes the UK government’s disregard for its Paris Climate Agreement pledges.[8]

You can now listen to the latest Extinction Rebellion podcast, where Dr Larch Maxey from Extinction Rebellion and HS2 Rebellion, at present risking his life in a tunnel below Euston Square, talks about what motivates his work; well-beloved writer Robert Macfarlane reads Heartwood his powerful poem against tree felling;  there are recordings of interviews with Indigenous protectors of the Amazon Forest and we end with a brilliant XR scheme to save over 700K oak trees.[9]

In the High Court tonight, Mr Justice Robin Knowles ordered that HS2 carefully considers the safety concerns of expert witness Peter Faulding and facilitates access between the tree protectors in the tunnels under Euston and their lawyers.

With Mr Faulding recommending in the strongest possible terms that the eviction should be paused and rethought, this order effectively requires HS2 to reconsider their entire approach. And with the tunnelers’ legal team now granted access to the site in order to take instructions and gather evidence, it fully intends to ensure that HS2 does just that.

It is extremely rare for an in interim order to be made in High Court proceedings so, while the eviction has not as yet been fully halted, this nevertheless represents a significant victory as part of the the larger ongoing legal battle.

HS2 Rebellion is an alliance of groups and individuals campaigning against HS2, including but not exclusively: StopHS2, Save Cubbington Woods, Crackley Woods Protection Camp, Denham Ford Protection Camp, Poors Piece Conservation Project and XR. It is entirely distinct from Extinction Rebellion, but does form part of the Movement of Movements, alongside other sister groups like Wildlife Rebellion, Animal Rebellion and Global Justice Rebellion.