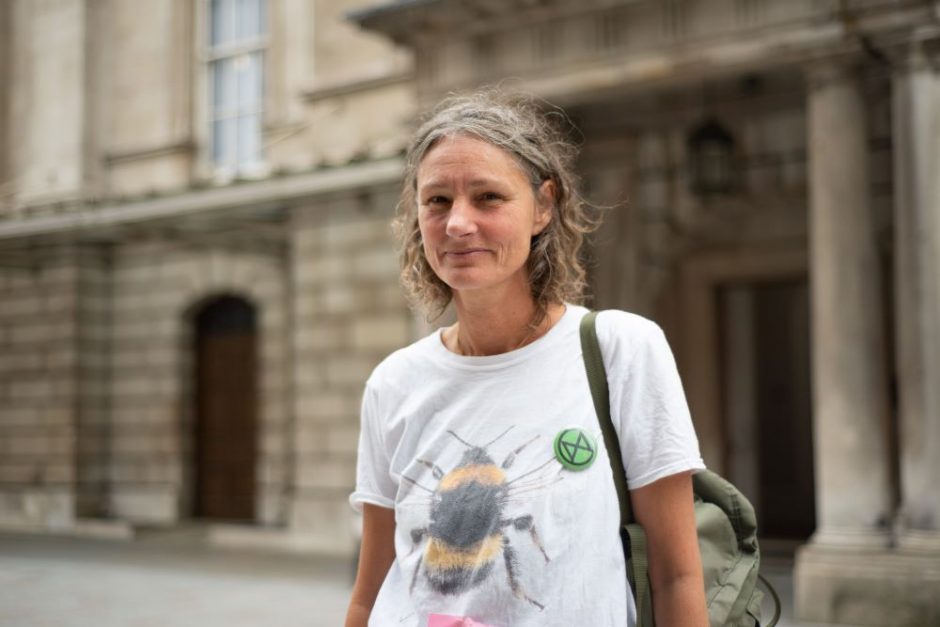 Naomi, who also runs a nature reserve, was arrested under Section 14 of the Public Order Act while on Waterloo Bridge during the 2019 April Rebellion. She pleaded guilty on 4th October 2019 at City of London Magistrates’ Court and received a six month conditional discharge and £105 court cost.

“I hold my hands up and I plead guilty as charged but for once I don’t feel guilty. For over 40 years of my law-abiding days I was guilty of inaction in the face of ecological collapse and biodiverse suffering and death. I was guilty of feeling powerless against the powerful and greedy. I was guilty of silently giving my consent.

So today I am only guilty of one tiny section 14 thing. This guilt free, legally guilty charge feels a lot like hope. Hope in the face of this judicial process that as we all know, has nothing to do with a public order act and everything to do with the establishment resisting change.

But change is coming.

I did not take non-violent direct action lightly. I am a gentle woman. I run a nature reserve. I am angry and shocked that this is what I, we, Extinction Rebellion has to resort to in order to defend life itself. To make science heard, when you should have listened to it decades ago.

An article published in Nature (a periodical written by scientists for scientists) is titled “Scientists must act on our own warnings to humanity“. I quote: “…we can no longer carry on as normal. ‘Acceptable’ forms of influence are not working, and we are running out of time — people in countries such as India and Mozambique are already suffering from climate breakdown. The scientists who alerted the world to the climate and ecological crises have a moral duty to join the popular movements demanding political action.”

There are similar calls to action within the communities of actors, doctors, teachers, health workers, students, academics, children, social workers and designers to name a few. People are deciding that the only way to tackle the ecological and human rights emergency is to rebel against the establishment and business as usual.

I’m Rebelling because I love this world. I’m Rebelling for my children, for the environmental defenders – my brothers and sisters in the fight for life. I don’t want to break the law, but I will. Because although it shouldn’t be, this rebellion is 100 per cent necessary.

Change has already started; it just hasn’t been legalised yet. When the world turns and you have to face the truth, hear the science and act as if it were real, we will not call you guilty. We won’t have to.”