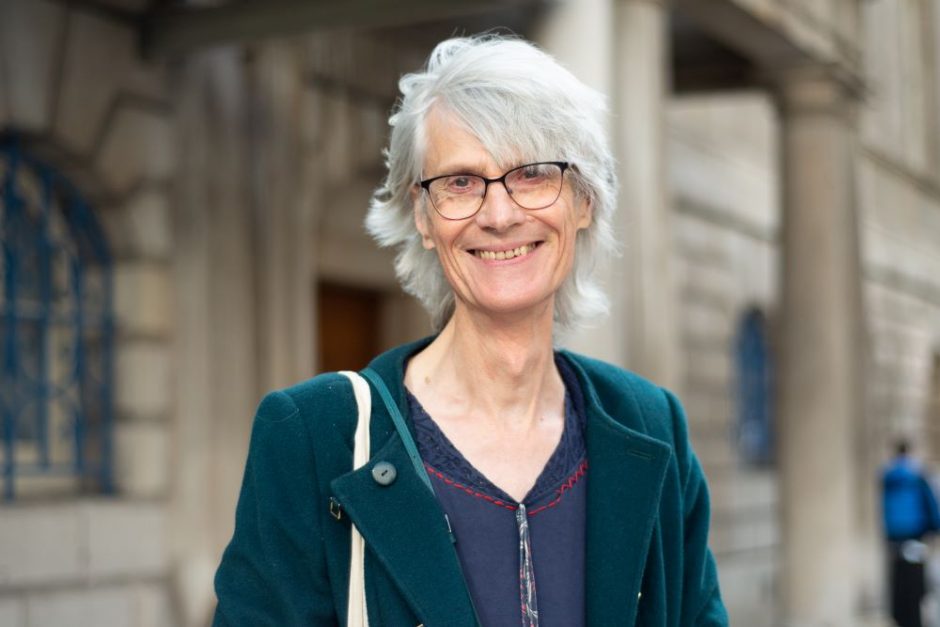 Leslie was charged under Section 14 of the Public Order Act during the 2019 April Rebellion and tried on 20th November 2019 at City of London Magistrates’ Court. Leslie was found guilty and given a six month conditional discharge and £250 court costs.

I am seventy, an ex-manager in Further Education and a non-binary person, an author qualified up to MA level, and a Quaker. As a Quaker I affirm rather than swear on the Bible because we are required to tell the truth, the whole truth and nothing but the truth all the time, rather than just in court. So I will acknowledge truthfully that I understood the consequences of not moving to Marble Arch when directed to do so by my arresting officer.

I was prepared to be arrested – not wanting to be arrested but willing to accept arrest – because my conscience required me to resist the immediate dangers of climate and ecological breakdown, and my wide-ranging reading of climate science obliged me to take the only actions left to me, after many other failed attempts to sound the alarm. My action was taken to prevent a crime – one that far outstrips all previous war, massacres or genocidal acts. Nothing less than the extinction of all human and complex life on earth.

My evidence for this threat is the research over fifty years by thousands of scientists using multiple evidence repeatedly peer-reviewed and rerun through computers, tested against observable changes in the climate and ecology of the earth. Speaking to the UN 2018 Climate Change conference, David Attenborough described the threat as “the collapse of our civilizations and the extinction of much of the natural world”. It is unprecedented, worldwide and not a fantasy, cult, journalistic speculation or film storyboard but hard scientific fact.

As a Quaker, I am part of a peaceful, non-violent group, known for their conscientious objections to war, involving acts of civil disobedience. In the same way, I contend that my small act, driven by conscience and necessity, of blocking a bridge, was a proportionate and rational response to the scale of the emergency, and to the British government’s failure to protect its citizens, and its pursuit of policies that acerbate the climate crisis.

In my documents for the court I have offered evidence that there is an imminent threat to UK citizens from a number of factors, including Flooding/extreme weather.

This includes flood damage occurring now to health and livelihoods in the North of England, described in The Guardian Nov 14th 2019 as ‘…at least 1,758 properties have been flooded across Yorkshire, Derbyshire, Nottinghamshire and Lincolnshire…including 1,200 people evacuated in Doncaster alone.’

To show this threat is increasing, climate-driven, immediate and dangerous, I’ve presented evidence in four parts:

Firstly, last year’s Met Office research which found that for England and Wales there is a 1 in 3 chance of a new monthly rainfall record in at least one region each winter.

Thirdly, the Environment Agency’s 2018 description of changing weather patterns in the UK:

Fourthly, a 2019 study by The Universities of Bath and Liverpool reporting that Northern England and southern Scotland have seen an increase in flooding of more than 11% over five decades.

Not only is flooding and extreme weather an immediate threat to the UK, but loss of biodiversity directly threatens the UK food supply.

“Insects are integral to the functioning of terrestrial and freshwater ecosystems, performing vital roles such as pollination, seed dispersal and nutrient cycling. They are also food for numerous larger animals, including birds, bats, fish, amphibians and lizards. If insect declines are not halted, terrestrial and freshwater ecosystems will collapse, with profound consequences for human wellbeing.”

And Kathryn Brown, Head of Adaptation at the UK Committee on Climate Change, says about temperature increase and water shortage:

“We know that the risk of heatwaves and higher average temperatures is increasing as the climate changes. Our 2016 report showed that, without further action, the number of heat-related deaths could increase from 2,000 per year today to 7,000 in the 2050s due to climate change and population growth. Water shortages are also a concern: we can expect greater water deficits across the country, including in cooler wetter areas like the north-west of England. The area of land well suited to the production of water-intensive crops, such as rain-fed potatoes, could decline by over 80% by the 2050s.”

In addition, I contend that an imminent threat to wellbeing is not when people are actually being killed by floods, starvation, diseases or drought. An imminent threat occurs when greenhouse gasses are first released. In other words, the current level of UK CO2 emissions, which stand 364.1 million tonnes, or 1 million tonnes per day (as evidenced by the following Government report, see page 6) will lead to deaths:

5. Prevention of a Crime

This was a terrible shock because I could suddenly see that the Earth might be heading towards disaster. I then began to research the CO2 count in the atmosphere, discovering from the Mauna Loa observatory that we were already over 400 parts per million and climbing. Realising that during the 70 years of my life the CO2 in the atmosphere had increased from 310.99 to 409-414 ppm, I felt afraid and distressed. I began to suspect that climate change of this speed is effectively a death sentence.

Later I read the IPCC Special Report on Global Warming of 1.5 °C with its requirement for ‘deep emissions reductions’ and ‘rapid, far-reaching and unprecedented changes in all aspects of society’ if we were to avoid runaway climate breakdown. This included major changes in diet and land use, transport and sources of power; building and insulation, banking and finance, consumption, and resource management.

I then realised when I read the 2019 UN Report from Biodiversity and Ecosystem Services, that since 1980 the global biomass of wild mammals has fallen by 82% and natural ecosystems have declined by 47%. This represents an additional ecological crisis which, in the words of the report, ‘poses a serious risk to global food security by undermining the resilience of many agricultural systems to threats such as pests, pathogens and climate change.’

Finally, I read several recent reports spelling out the accelerated trends in climate change, including faster loss of Arctic ice than predicted, the speeded-up melt in Western Antarctica (Thwaite’s Glacier/Ross Ice Shelf), the Arctic heatwaves and increased forest fires, and the disastrous melting of the permafrost 70 years in advance of climate predictions, releasing large quantities of Methane.

During this reading I became aware of feedback loops and tipping points. In the words of World Meteorological Organisation Secretary-General Petteri Taalas, “Climate change causes and impacts are increasing rather than slowing down…Sea level rise has accelerated and we are concerned at an abrupt decline in the Antarctic and Greenland ice sheets, which will exacerbate future rises. As we have seen this year with tragic effect in the Bahamas and Mozambique, sea level rise and intense tropical storms led to humanitarian and economic catastrophes.”

He concluded: “To stop a global temperature increase of more than 2 degrees Celsius above pre-industrial levels, the level of ambition needs to be tripled. And to limit the increase to 1.5 degrees, it needs to be multiplied by five.”

The human impact of these changes on health and wellbeing has been documented by the Lancet in the following words:

‘In 2016, global transmission of the dengue fever virus was the highest on record, the Baltic region has had a 24% increase in the coastline area suitable for epidemics of Vibrio cholerae, and in 2016, the highlands of sub-Saharan Africa saw a 27·6% rise in the transmission of malaria.

A proxy of agricultural yield potential shows declines in every region, with 30 countries having downward trends in yields, reversing a decades-long trend of improvement.

The health burden has been immense, with people in more than 90% of cities breathing polluted air that is toxic to their cardiovascular and respiratory health. Indeed, between 2010, and 2016, air pollution concentrations worsened in almost 70% of cities around the globe, particularly in low-income and middle-income countries. In 2015 alone, fine particulate matter was responsible for 2·9 million premature deaths, with coal being responsible for more than 460 000 (16%) of these deaths, and with the total death toll (from other causes including particulates and emissions such as nitrogen oxide) being substantially higher.’

I have taken the court through how my understanding of the scientific climate and ecological threats developed because I have found that many people are in a passive relationship to science. They don’t challenge it, but don’t read it, and their acceptance cushions the full impact of understanding. As a Quaker, having read the science, I took it into my heart – which required me to act. During that process I raised the issue to little effect through lobbying my MP, letters/emails to MP, petitions, demonstrations, published interviews on my blog and personal lifestyle changes shared with others. However, when I, with others, peacefully occupied Waterloo Bridge, my actions had a powerful effect on public consciousness. Media coverage of climate increased dramatically, public opinion surveys moved from 15% concern to the current 80%, while Parliament and 60% of UK local authorities declared climate emergencies.

Given that scientists predict a window of 10 – 12 years (at most) during which we must reduce the carbon count in order to survive, I contend that I had no choice but to take non-violent action to highlight these life-and-death issues. Given the peaceful nature of the occupation, the severity of the threat, the UK Government’s inaction and the effectiveness of our protest in bringing the issue to public attention, I contend that my actions were appropriate, reasonable and premised on genuine belief and conscience. I also contend that the science and commentary I have offered means that the requirements of conscience, imminence, necessity and avoidance of harm have been met.”

A description of the arrest is on Leslie’s blog: Taking Action About Climate Change: My Arrest